So the Crow’s been pretty out of sorts. But hey! At least he dropped a review for the new DISCO episode New Eden right on time! Our Cap’n-man‘s having a rough time, so even though I’m still flying high on the power of medicine(!) it looks like I’m taking over everything for the next… week…? This week? Next week? I mean… it’s Sunday. The fun-nest day when it comes to planning weeks so whatever. I’ll fire up our social media game the week after that (because interacting with people breaks my brain)!

Aaand I’m a little behind. I haven’t (ever) seen the fifth and the sixth Star Trek films. So… I guess I know what I’m doing tomorrow! (It’s not like I’m lying down not doing nothing else. I’m going on adventures! in my head!).

So I’ve been trying to get the Crow out of this downward spiral he’s been going on. He’s been planning something big (and I mean HUGEBIG) for like the last two months or something (without me! aaaaa!) but it wasn’t working out for him. SO OF COURSE the muppet clocks that he needed his super secret ingredient to make it work. And O M G does everything look absolutely AWESOME!
And just because I can, I’ll leave this right here…

I’m going to get to all that in a proper team update later on, but something extra super GORGEOUS came out of our few days of “working” together… … … … jus‘ sayin!

Just like the last one, The Voyage Home is also directed by Mr. Spock (Leonard Nimoy) and it’s about…
Whaleins…?

Wait. That doesn’t sound right. Okay! Right! Let’s take it from the top! Rama comes sliding through space with its… “pet”. It’s pet is this little sphere that makes all these noises and it sounds like it’s crying all the way to Earth, where it starts kicking up all sorts of fuss for reasons no one can figure out. And y’know what? I just realised that Rama up there might just be the sphere‘s pet.

So anyway, since what happened in The Search for Spock, our best buds are living on Vulcan. Spock’s still having a bit of trouble getting to grips with everything and I guess the others are trying to teach the Vulcans what having fun even means. But after a bit of sitting down and talking, they decide to go back home and try and see if they can settle things after what happened in the last film (this really is a sequel huh?). But on the way they hear about the little Spherama (that’s what I’m calling it) and decide to help out.

Of course, of ALL the people Spherama’s gone by, it’s SPOCK who figures out that all that crying and noise from the littlebig ship is really the call of the humpback whale. And he proves it to the others (who’re all like: “whale? whaaa?”) by going through the records on a… Klingon ship which are written in… English. Makes sense no?

Oh yeah, I forgot to mention. There’s no Enterprise here. There’s only the Bounty.
But there’s a problem that shows up! Y’see… humpback whales went extinct in the “21st century”. And the Spherama isn’t going to be happy until it gets a reply (or that’s what we’re going with anyway). 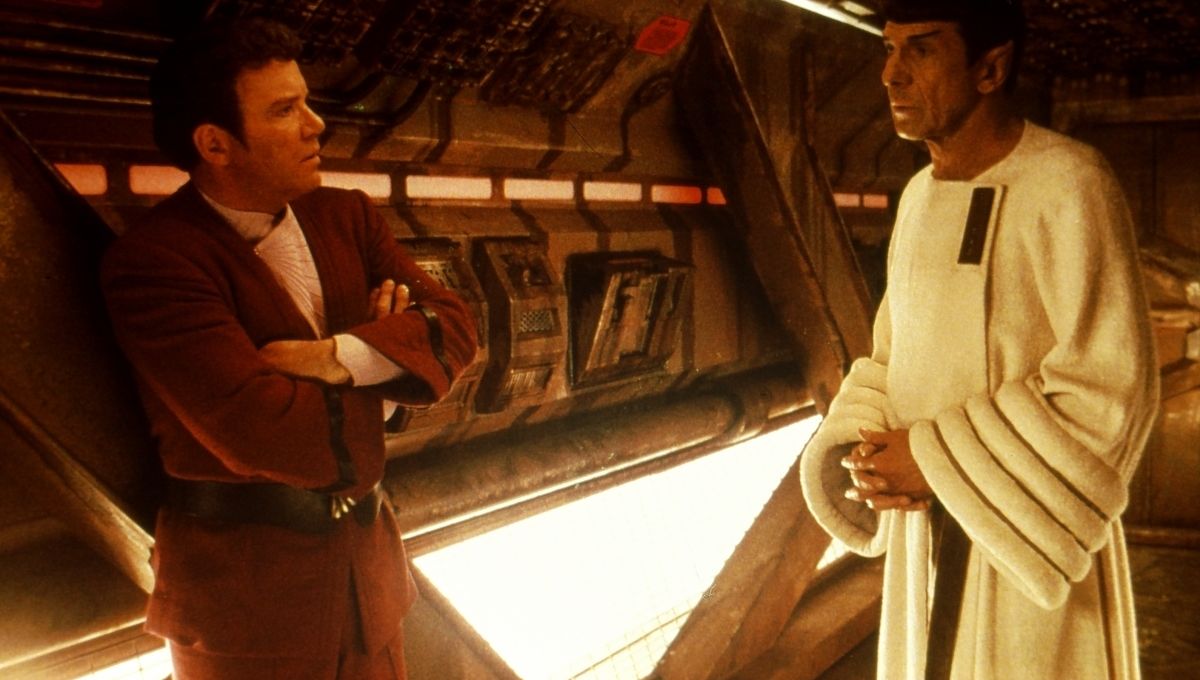 See… now here’s the thing. When I read all that way back when. I really thought that this was going to be one of the dumbest films I’d ever see. Also remember that one of this film’s most famous scenes is one in which the heroes sling themselves around the sun to send themselves… back… in… time. I mean… the line in the film even goes:

Sure. Slingshot around the sun. Pick up enough speed. You’re in “time warp”.
If you don’t you’re fried.

And this is something they’ve done before…?

I mean… this ship can go to warp right? So why’s it they need the sling assist? Oh wait. They go to warp while they’re running up to the Sun! And… And… oh no.

Okay… here’s my problems in one nice lil‘ list (stay with me until after).

And then… after all that. Like 95% of the rest of the story happens on Earth.

So… yeah. I really thought I wouldn’t like this film because of all those reasons. But y’know what?

Okay. So that slinging’ around the Sun thing is dumb as grapes. The whole ending is a bit… “okay. That was it?” But there’s a fun little prance going on around San Franscisco in this one. The crew splits up (finally)! and there’s some awkward fun had around town. There’s a nice little story about saving the planet’s species and how we’re messing up the planet. There are some little history lessons (which I guess were news at the time) and a lot of fun with Spock being in lalaland while being in lalaland. Scott (James Doohan) and McCoy (DeForest Kelley) get up to some hijinks which are both based in engineering and medical. Chekov (Walter Koenig) gets into nothing but trouble (pesky Ruski!). And we get a little more Uhura (Nichelle Nichols) than we did last time but still not enough of both her or Sulu (George “Oh My” Takei). Kirk (Bill Shatner)’s pretty smooth in this one and winds up nabbing himself a replacement future-waif: Dr. Taylor (Catherine Hicks)!

Something the Crow and I worked with a lot once (ALON) shows up and I only really caught on to it when I rewatched the film recently. I liked some of the preachy bits about “saving the planet” and what was going on with the whales. I’ve told you lot before about my ancestor land before and hoo boy are my spawn-folk a BIG problem when it comes to things that do with our cute cuddly bigHUGE cousins who float around the sea and go BWOOOWIIIEEE OOOUUUUWIIIP! and things like that.

Big E shows up! The Crow once turned in a “skeleton” (or whatever he calls those things) for a Star Trek one-shot a few years ago and he was going heavy on the “Big E” theme. I’ll get him to spill the beans at some point if he can, but it was nice to see the big old lady in the film.

So aaanyway… the ending kinda breaks every rule in the Star Trek book and is a little bit “meh” because I thought something more interesting was going to happen with Spherama. I don’t really like the Bounty and thought that it looked a lot better in the last film (it looks very different tbh) and the whole film looks a bit… I dunno… flat? But it’s pretty okay as far as 80s flicks go.

It’s not the kind of film that sounds like it would be even good, but it’s actually pretty nice. It’s just a fun ride that’s beating itself over and over in the head because of some dumb things that happen right at the start and are just SO dumb that it really takes you out of what’s going on. But the real good parts are in how the crew deals with the “ancient Earth folk”. And the funny bits are actually kinda funny.

I’m going to go and recommend The Voyage Home but only if you pay attention to this one big warning: dumb stuff happens in this one. Ignore them and you’ll enjoy this film. And if you can’t get over how bad they are… write up your thoughts and it’ll make everything feel all better.