a “conversational” review by the Crow and the Azure-Winged Magpie(!). 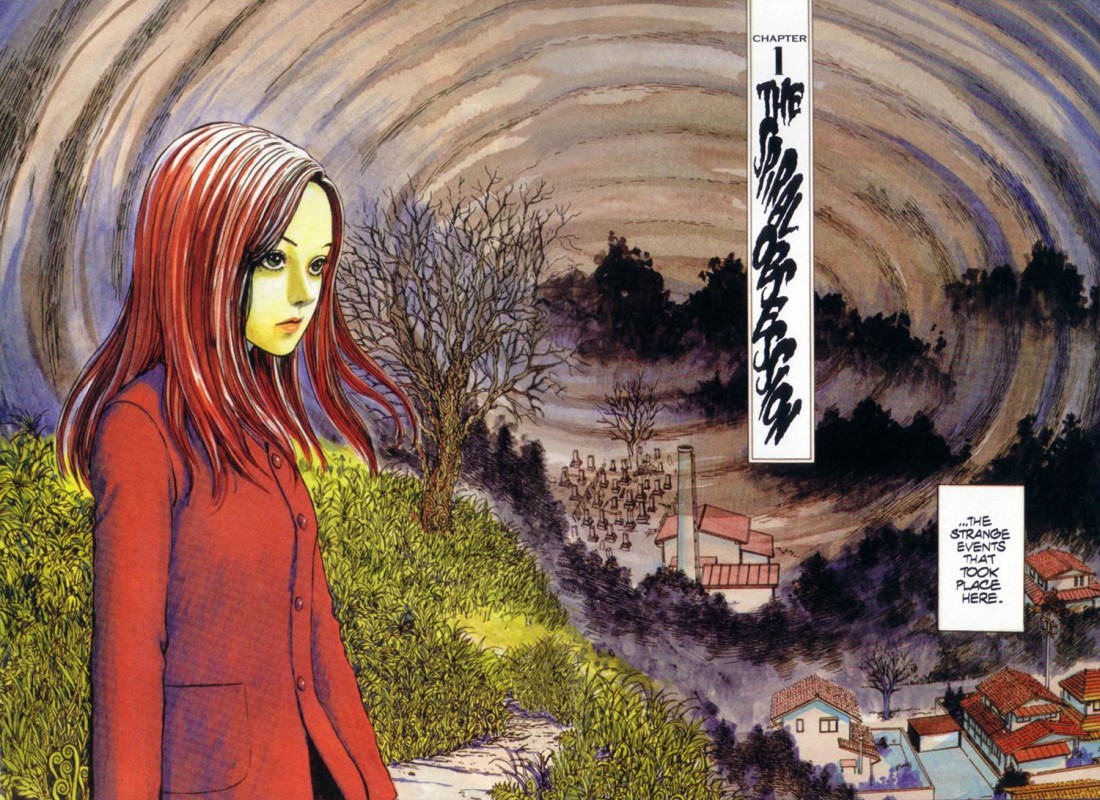 The Crow: Oh man, this is going to be a tricky one.

I’ve been familiar with some of the works of Itō Junji for some time, but haven’t really delved deep into his portfolio.

Apart from Tomie, and only having heard of Uzumaki and Gyo (and a little bit about the man’s work with Hideo Kojima, during the making of P.T. — which someone is kindly letting us play soon! — and possibly Death Stranding), I have no real exposure to his work.

Recently, the A-W Magpie’s been working on a new kind of post for The Corvid Review all of her own design (sometimes, it’s nice to just kick back and let your team do the work for you) called the Corvid Challenges.

To gloss over what these posts are going to be about: every so-often, one of us picks out some form of fiction-media that we know one of the others hasn’t seen or heard much about, and ‘challenges’ us to explain or analyse it.

And the works of Itō Junji were the Magpie’s first pick for me. I’ve been going through her (quite comprehensive) collection over the past few days, but decided: why not watch one of the movies based on his work? Based on one of his most revered works, no less.

Enter Uzumaki. This 2000 movie is a live-action adaptation of the manga of the same name, directed by first-time director Higuchi Akihiro.

To preface what comes next: I watched the movie before I finished the manga, and-

The Azure-Winged Magpie: (> っ <✿)…you IDIOT! You should NEVER do that!

The Crow: Well, I mean. I knew it was going to be massively different, and I don’t mind spoilers all that much. And even though the adaptation had little to do with the manga at the point I’d already got to; watching it first’s given me a whole new way of looking at the movie. It’s probably for the best that I jumped the gun and gave the movie a watch when I did.

The Crow: Let’s just jump into the movie, shall we?

(A warning to the wise: While I’ll be handling the better part of this review, the Magpie’s going to be jumping in and out of the review as I go through it, I’ll mark her comments out along the way.) 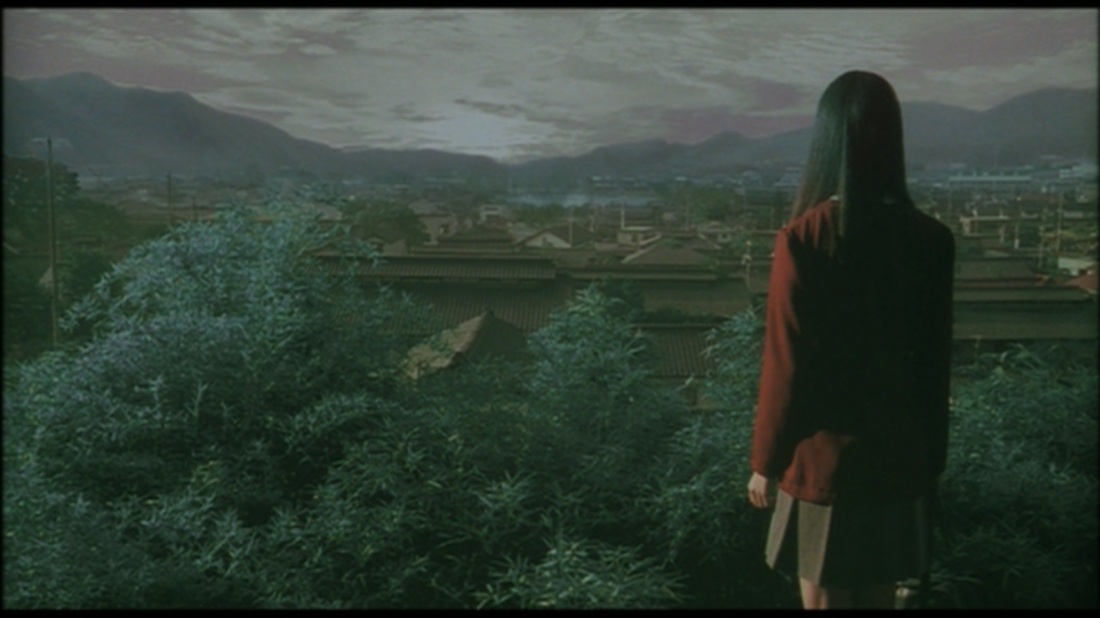 The Crow: The best way to approach Itō Junji — now that I know so much more about the man compared to just a few weeks ago — is to just head in blind. Let him guide you into his worlds. All you have to do is turn the page at your own leisure.

My feathers aren’t easily ruffled; to this day, only two things have managed to give me even a hint of fear via exposure, and neither of them lingered long.

However, I’d be lying if I said that Itō Junji’s works haven’t done a fine job of trying their best to come close. But rather than terrify me, his work resonates with me on a certain creative level; while I’ll leave my instant fascination — and other thoughts — regarding Itō Junji for another day, I must credit the man with showing a level of restraint I once completely failed to show when I needed it most.

Uzumaki opens with Goshima Kirie (Hatsune Eriko), a high-school student who lives in the town of Kurouzu (which translates to “Black-Vortex Town”, as I gather), experiencing a strange gust of wind just after she realises she’s about to “lose”.

The Azure-Winged Magpie: And she goes and legs it to get the big ol’ W. But she gets stopped by Yamaguchi Mitsuru (Abe Sadao), a boy who’s been creeping up on her sexy shit. They have a bit of a weird stare-down before Kirie manages to make like an eel and squiggle past his face.

The Azure-Winged Magpie: On the way to whatever W she’s after, she spots a friend’s dad Mr Saito Toshio (Osugi Ren — from Audition and the PM from Shin Gojira!) staring at a wall.

The Crow: It’s not even the snail he’s looking at. He’s more interested in the patterns on the surface of the snail’s shell: the spiral-like bevelling so-commonly found in snails.

After being ignored wholesale by Mr Saito, Kirie continues on with her little “game”. And the game? It’s to beat her boyfriend Saito Shuichi (Fhi Fan; not really sure how to do his name right), Mr Saito’s son, to their usual meeting place.

The Azure-Winged Magpie: So… she wasn’t after the W after all, eh? She was after the D, hmmm?!

The Crow: That was pretty bad. What’s happened to you, today?

The Azure-Winged Magpie: I dunno (◔◡◔✿)

The Crow: Whatever. From this point on, the town of Kurouzu starts spiralling into a Lovecraftian series of events with only the one theme binding them all together: the Uzumaki (the Spiral). And it’s up to our protagonists Kirie, Shuichi, and Tamura Ichiro (a reporter who becomes involved with them, played by Horiuchi Masumi) to not only find out how to save themselves and the people of Kurouzu, but to understand what the heck is happening in the first place. 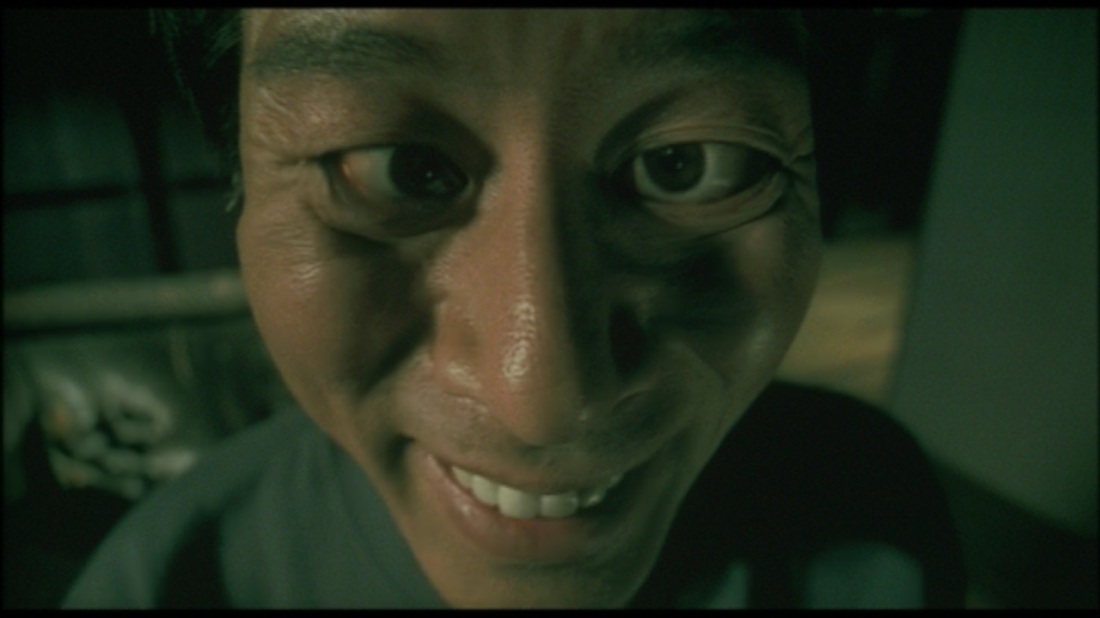 The Crow: I quite think that going any further into the plot would’ve been too spoiler-y for what we’d intended for this post. For those of you who haven’t read the manga, it’s best to just head into this one with no more information. Rather, let’s talk about how it’s been executed and how it’s seen.

The Azure-Winged Magpie: People who read the manga hated it. And the film didn’t really make that much of a buzz when it came out. And THIS is where the Crow and I are going to disagree.

The Crow: Overall, I thought it was more-or-less competently made. There’s no doubt that the manga is superior. During our brief research into the movie, we came across a few people saying that the movie had entered production when the manga wasn’t yet completed. Whether or not this is true, we can’t be sure, but it’d certainly explain a lot of things to do with the movie’s final third.

Due to what I can only assume are technical drawbacks, some of the more striking images from the manga are only suggested at by the visuals, but I can’t discredit the movie for having to work with what little resources it had.

Like I hinted just some time ago, there are some pretty major deviations from the manga nearing the end, and this is where the movie slightly fell apart for me. It’s not too bad, but it’s nothing spectacular, either.

The Azure-Winged Magpie: Okay, so what did you even like about this film?! I hate like 90% of it.

The Crow: I actually thought that the characterisation for Kirie was pretty well done (and I think Hatsune Eriko knocked this one out of the park for reasons I’ll get to later). While the movie could’ve surely done with a better child actor for young Shuichi, I think that the attention paid to building the bond up between both the characters was pretty good. Of course, it falls apart in the end thanks to the movie failing where the manga succeeded (and I ask: if the manga didn’t exist, would this be as disliked as it is?).

The movie does well to build up a sense of dread, and while we don’t get much by the end, I think it works really well as an example of “weird fiction“, rather than horror — which is, after all, where it’s roots lie. I wouldn’t recommend people take this as an example of horror at face-value. This is something quite different, with overtones of horror.

There are few jump-scares, which is always a welcome relief, and it carries itself with a sense of almost-self-awareness. There are bizarre moments involving other people (despite the presence of the spiral obsession), which could just as easily be taken as the world viewed through the eyes of a teenager looking at the world on the brink of her own maturity.

I find it all quite adorable, on a level, and Hatsune Eriko’s little moments of candour really do ground the movie despite it’s massive fantasy elements. This is a movie which doesn’t have to push it in your face that weird things are going on. Kirie’s face will show said notion at even the merest hint of something weird leading up to the unleashing of the full effects of the Uzumaki.

The Azure-Winged Magpie: Most of my problems with this film lie in how different the ending is from the manga! I don’t care if the manga hadn’t finished before the film started being made. How much would it hurt someone to ask Itō Junji how he had the ending planned out?!

Just look at GRRM and GoT!

The ending of the manga is almost epic. This one is kinda like a few pennies short of a pound. It’s so… anticlimactic. One second: things are happening and everything’s shiny and then… BAM! It’s all fucking 4fps and the film just… it just ends.

I mean… WTF WAS THAT ENDING?!

And they ruined THAT “moment” with Shuichi and Kirie as well. That was one of the best bits of the manga! Why did they have to go with the ending they put in the film. I fucking hated it.

The Crow: It’s easy for one to say that after having read the manga. For outsiders, I’d wager it’s not too bad. Not good, mind you, but not too bad, either. I personally have no major issues with the ending when I consider this as a standalone work.

The Azure-Winged Magpie: Whatever. I still don’t like this film. It’s not a good way of showing off what happened in the manga. It’s kind of a decent shot at it. But man… it’s just not good.

The Crow: Each to their own. I’d agree with you on the fact that it’s not that good, but it’s not a bad effort at all. I’d go far enough as to say that it’s probably better to watch Uzumaki before one reads the manga — just as long as it’s made clear that there’s more to the manga than the movie itself suggests. I don’t think this is a bad gateway movie at all.

And I do think it serves it’s purpose as an example of weird fiction in the field of cinema. I think I’m increasingly becoming convinced by the idea that Itō Junji either hadn’t made up his mind about the ending (more than a little unlikely), or that the ending had for some reason just been left out of the movie on purpose by one of the parties involved.

I think people have been unfairly harsh to this one. But I won’t lie: it’s not that great. It succeeds in building an atmosphere, and runs at a decent, slow pace, and ultimately works as a movie. So it does work. It’s not some gigantic failure like people make it out to be.

And can I just mention how much I love this ending song by Do as Infinity? And it’s called “Raven” and all.How appropriate!

The Azure-Winged Magpie: Fuck that name, but yeah. That’s some kick-ass song. I’m picking both Hatsune Eriko and Van Tomiko as my baes from this film!

And I know you think Tomiko’s pretty (and Eriko and all), you scallywag! You’re going to have to get through me first!

The Crow: …sigh. Why do I hang out with you? Here’s one of the covers of the manga collections:

And here’s one of the movie’s posters (in English as well):