Captain‘s log, Stardate 96859.28: Last week, I had many questions that I did not make clear in my review of Perpetual Infinity. The tune of some of those questions, however, were rhymed in the following review I wrote for Star Trek Into Darkness. The biggest question was this: the Red Angel suit — a technology over thirty years old by the time of the show — is far too powerful to make Star Trek work any longer on many a front, rendering “present” starships nearly obsolete in two distinctive ways, so what would the implications of its existence be?

This latest episode does not bring the suit back, and I’m of the opinion that everything about it will be hand-waved away and forgotten in due time. Bad writing, perhaps, but it wouldn’t be the first time it’s happened in Star Trek.

There is also much silliness to do with time crystals — a relatively young concept in physics. I’m going to say this once, and never bring it up again, but the crystals which show up in Star Trek: Discovery are not those crystals. The ones we have here are magic, and it really isn’t a problem as long as they make sense within the story. Star Trek is Science Fiction, after all.

That said, their use in the show is another aspect that affects the universe. And this week, we are no longer dealing with only one of these crystals. We’re dealing with a planet where they occur naturally. In order to investigate this issue, I invite you to assume your stations as we warp into: 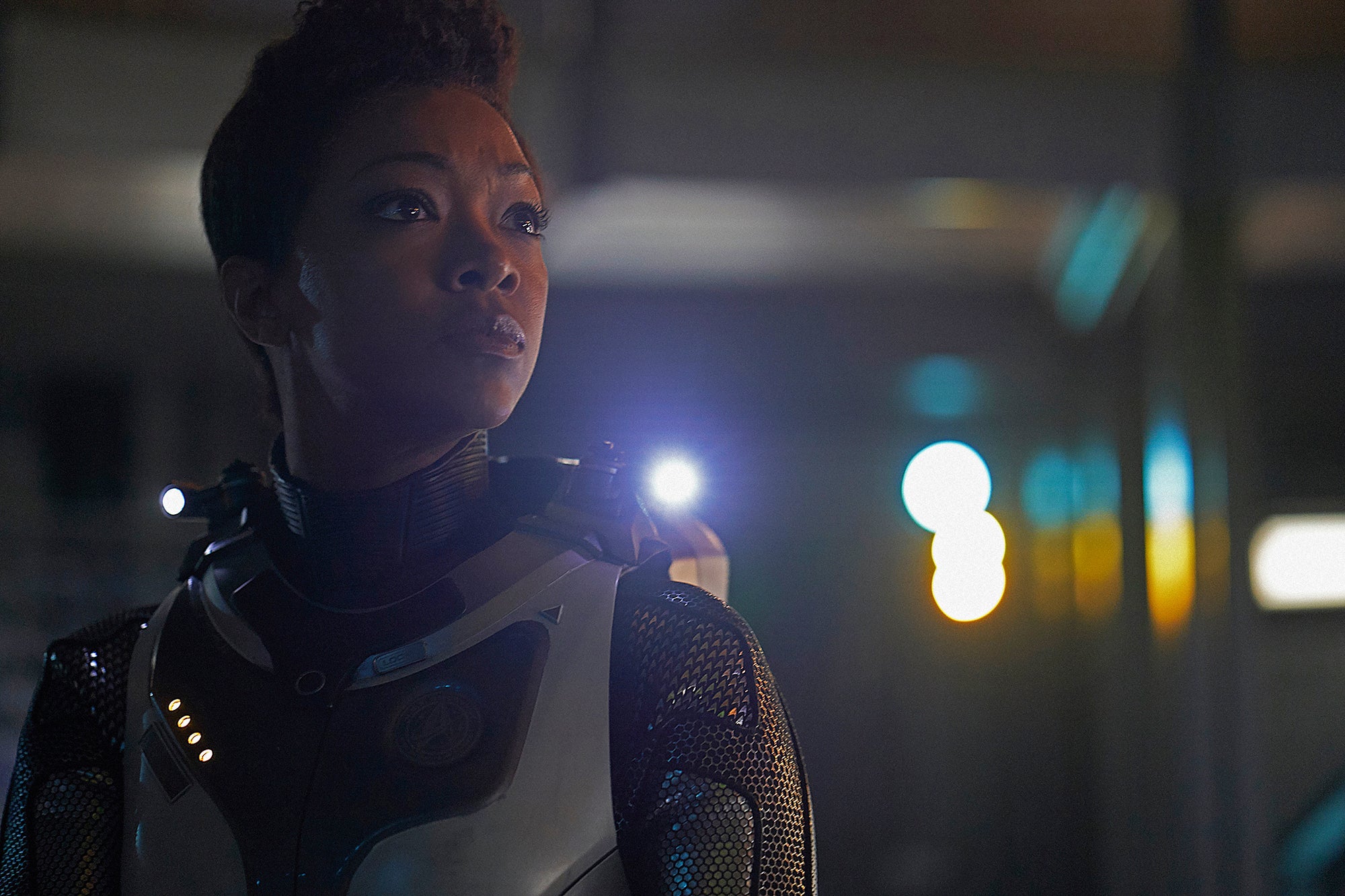 DSC0212
Through the Valley of Shadows

Through the Valley of Shadows opens with Cdr Michael Burnham (Sonequa Martin-Green) being comforted by her foster mother Amanda (Mia Kirshner) over the loss of her original mother Gabrielle (Sonja Sohn). But their conversation is cut short — rather too short — by the arrival of Spock (Ethan Peck), who brings news of a new red signal in the sky. Burnham instantly acts like an aggressive child, and I must lament how terribly this character is written. I understand she’s going through tough times, but a lot of what makes her times tough is her fault. Her pinning Control down to only Leland (Alan Van Sprang) is also an incredible leap in logic. I don’t quite understand what’s going on with her. Does someone high up in the writer’s room despise this character? There are multiple points at which she could easily grow to be likeable, but the show insists on making her act like a spoiled, entitled child far more often than not.

Of course, this is all nonpoint, since the universe revolves around her. This episode makes clear — by sacrificing poor Gant (Ali Momen) once again; or does it count as twice? — that Control, the AI planning the end of all sentient life in the galaxy (at least to begin with), now considers Michael Burnham the greatest threat to its existence. It pulls off a Batman Gambit in order to lure Burnham out so that it can esentially have her for itself. It’s foiled, of course, revealing it to be not as effective in the vicinity of Sarek’s children. A starship with a decent crew complement? No problem.

Burnham and Spock? That’s an impossibility.
It’s nice to see that the villains are as useless as usual on this show (I’m not letting go of Lorca, though).

I’m making no secret of my dislike for how Burnham (or the world around her) is written of late, but I must commend the show on how it’s handled Spock and just about everyone else populating the screen, no matter how little they actually show up. And this is where I’m going to ignore the story directly involving Burnham and Control and address the parts which shine the brightest in this episode. 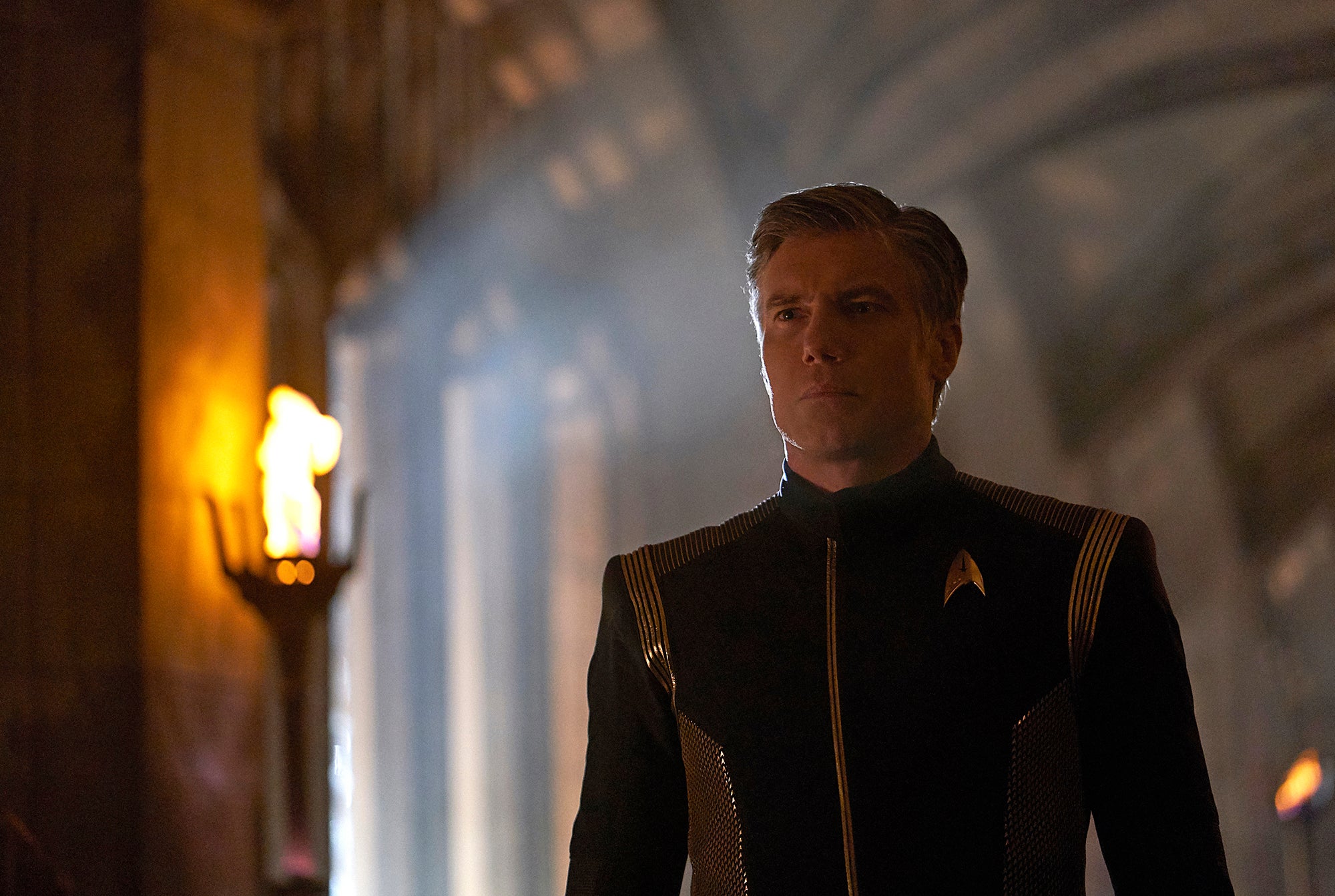 L’Rell (Mary Chieffo) returns to the show, and the subject of her son with Voq/Tyler (Shazad Latif) becomes a central point in the story. The red signal has appeared over Boreth: the planet on which Tyler abandoned the young boy. Boreth — as it happens — is not only central to the legend of Kahless the Unforgettable, but is the source for the time crystals which have become so important to this season of Discovery.

Following a little parental counselling, Captain Pike (Anson Mount) volunteers to head down to the planet and negotiate the release of a crystal into the hands of the Federation. Once a crystal is secured, the plan from the previous episode — or something similar — can be triggered. He arrives, and although the monks protecting the crystal mines are built up to be a very difficult group to negotiate with, I felt that the negotiations went a touch too smooth for my liking.

This, however, is where the episode shows its strongest hand. Although the negotiations are straightforward, and the walk Pike takes with the “Keeper” (as he’s known on imdb) — the klingon Tenavik (Kenneth Mitchell once again) is rather silly, there is a saving grace to Through the Valley of Shadows.

But before I go there, let me talk a little about Kenneth Mitchell. This man has gone from attempting to kill Voq/Tyler thrice (once by abandonment, once by spaceship, and once by masterminded assassination) to playing his growth-accelerated and abandoned son, to becoming one of the most important people in the life of Captain Christopher Pike. That is a c.v. of formidable repute. I might just start calling him the Klingon Supreme as far as Discovery is concerned.

The silly walk involves two quaint pillars named “past” and “present”, but ends in a rather decent-looking chamber wherein Pike encounters his own fate. Star Trek aficionados already know what comes next, and I admit that it all looks rather good. I imagine this will be the only time we see the incident in question on screen, given that there are no current plans involving Mr Mount in a significant capacity beyond this season (although a guest appearance in a series finale would be amazing). I also posit that in his quiet moments at the end of the episode, Pike is already considering his options — options among which one will lead us to the events of The Menagerie. 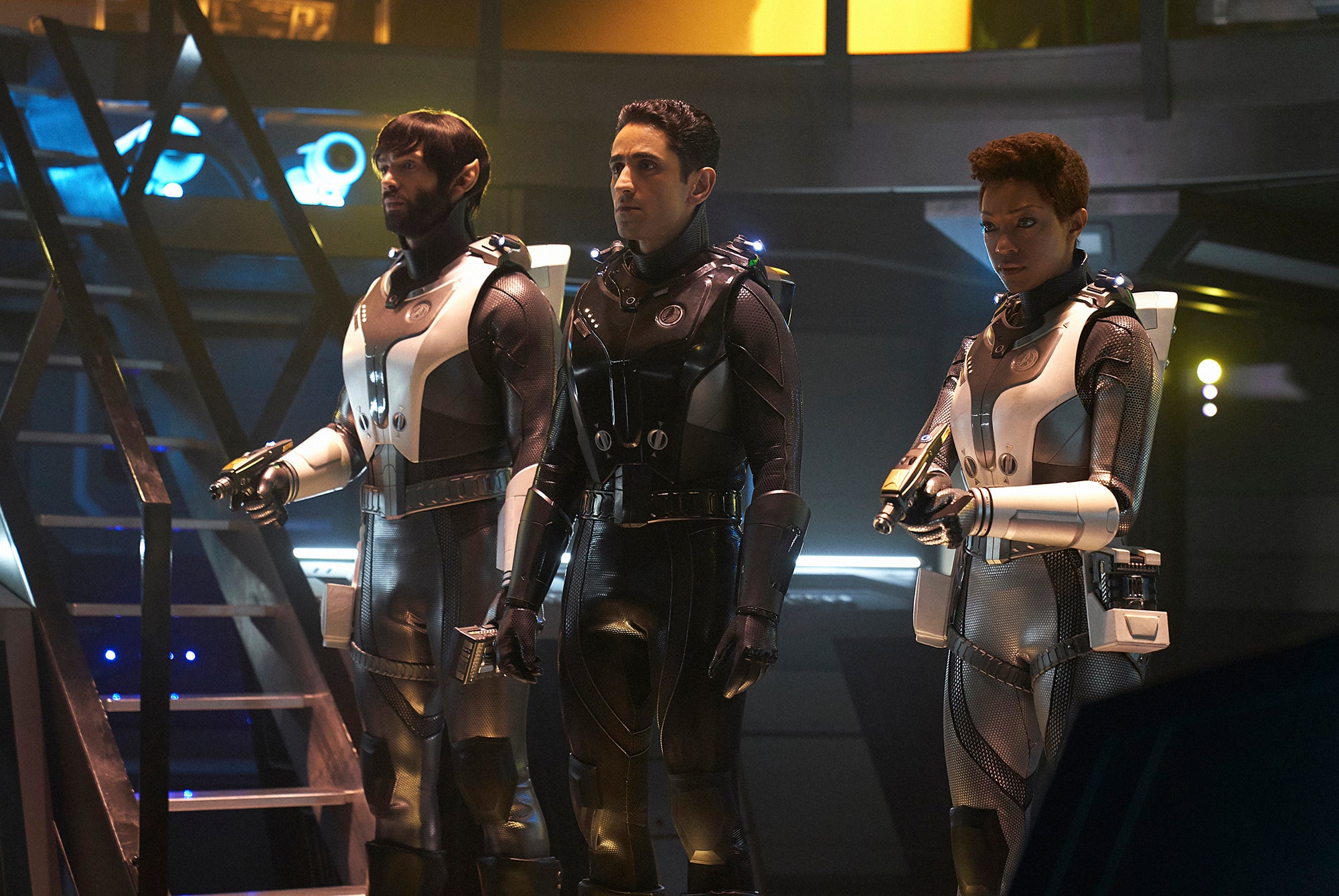 What is the saving grace, though, is not Pike facing his own sad fate. It’s his reaction to that fate. Mount’s performance in the following scenes isn’t strictly speaking amazing (yet), but it’s certainly a solid shift. The weight of his decision does pour out of the scene, and he champions the Starfleet ideals in a way we haven’t seen on screen in a long, long time. If not for Mount’s solo performance, this episode would’ve been rather missable, but ends up gaining it a recommendation. Mount’s performance is pure Star Trek.

Pike carries the weight and returns to the Discovery — with news for Ash and L’Rell. He deals with the severity of what he has seen with a demenour harkening back to Sir Patrick Stewart at the end of The Inner Light (yes, it’s that good). And this is where his performance really hits the higher notes (the word being: amazing) — once one looks at the work as a whole.

An interesting thing about Through the Valley of Shadows is that it deals with an interpretation of the predestination paradox (something the boys from the Department of Temporal Investigations hate). So far, Discovery has posited that time is a living thing, that it is fluid and can be rewritten (mostly through dialogue); and yet, Pike is now living through a predestination problem. How this plays out, we’ll have to wait and see, but if both these methods of dealing with time in the show are not used in contrast to one another, it’d be a shame. I’d like the show to firmly address these larger concepts it’s brought into play.

The ending promises the Enterprise, en route to save the Discovery from the thirty Section 31 ships which have assembled around Boreth (I quite liked the “almost their entire fleet” quip). I assume all of these ships are unmanned drones by this point, with maybe a few reconstituted agents to handle the tasks suited to humans. And on that note: why does Control require to be in proximity to Burnham? Does it not have enough information to “replicate” her already? Something about that seems off.

I don’t know for sure if we are going the route of the Borg, but what’s certain is that we’re dealing with terms more suited to Battlestar Galactica at this point (one day, I’ll make my case for Baltar). It’s an interesting approach, but the writing staff will need to up their game if this season of Discovery is to be saved from spiralling into silliness. The heart of this episode lies with Pike, and he ultimately saves it. To what end, we’ll find out next week (it’s likely that it might tie into another famous captain, but we’ll see).