First Officer’s log, Stardate 96838.56: We’re nearly done with our Star Trek Celebration! But you didn’t think we were just gonna leave it at the films didja?! DIDJA?!

Today I’m going to talk about one of my favourite Star Trek episodes ever and there were so many to choose from! I was going to pick In the Pale Moonlight but then I looked at the Crow’s list and realised I had to nope out of it. His list is straight depressing so I had to do something fun to lighten the mood around these parts. 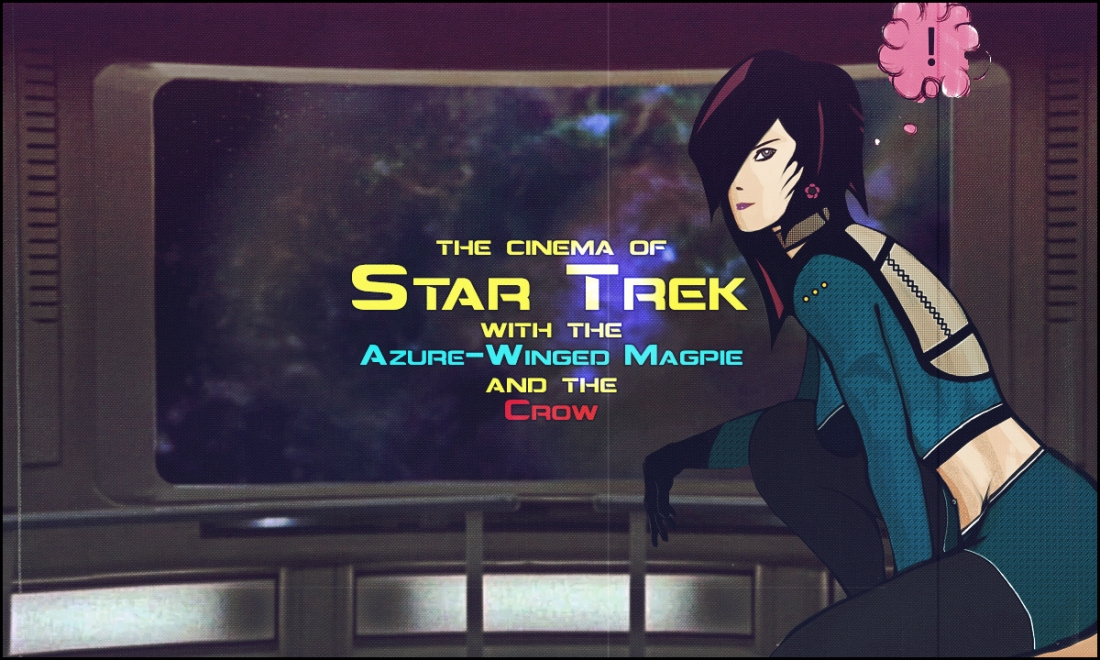 So the boys from the Department of Temporal Investigations hate jokes about time and predestination paradoxes and Captain Kirk (because he was a menace!) but they love playing around with Captain Sisko (Avery Brooks)’s prize baseball.

But let me start at the beginning. “If there is such a thing”. So the Defiant (NX-74205) goes off to Cardassia Prime where the Cardassians hand over a Bajoran Orb (fishy but oookay). Major Kira (Nana Visitor) starts playing around with it to make sure it’s the real deal and the rest of the crew deal with a “passenger” they’ve taken onboard. This passenger’s name is Barry Waddle (Charlie Brill) and he used to be a prisoner on Cardassia. He hates the hot fish juice the Cardassians drink. So of course he wants a Raktajino after he sees HUMANS! again for the first time in years. Worf (Michael Dorn) gets the mickey taken out of him and both Julian Bashir (Alexander Siddig, otherwise known as Siddig El Tahir El Fadil El Siddig Abderrahman Mohammed Ahmed Abdel Karim El Mahdi) and Chief Miles “the only Irishman in Space” O’Brien (Colm Meany, otherwise known as Colm Ó Maonaigh) try to get Worf over the comments about his B.O.

And then! There’s a big orange light and everyone dances around in their chairs and… they’ve been zapped off to somewhere else!

And where have they been zapped off to?! I think the ship that’s “very close” to them could be able to help out. And what ship is it? What ship is it? Iiit’s…

It turns out that Barry’s real name was Arne Darvin and he was another one of those Ash/Voq cases (Klingons can be real dumb). And we know exactly who Arne Darvin is don’t we? He’s the bad guy from the classic Star Trek episode The Trouble with Tribbles.

And because papa Sisko doesn’t want a visit from Temporal Investigations, he wants to solve this whole problem all hush-hush and under the radar. So what does that mean? It means it’s suit-up time!

So everyone gets into their retro gear and gets ready to head off to station K-7. Y’see… Darvin’s planning on making sure his plan worked way back when so that his life could be better. Bashir gets to do his McCoy line and he’s told about the switcheroo in colours that happened between TOS and TNG. And then Jadzia Dax (Terry Farrell) makes a good point about what was up with the uniforms back then (tbh I like that style best) and we’re off on the mission.

And next thing you know… we’re on the Enterprise! And I mean the actual Enterprise. Like the one from 1967. The show just took the DS9 characters and put them straight into an Original Series episode and it doesn’t feel like a thing has changed. This is the best green screen ANYTHING I’ve ever seen. One or two scenes kinda stand out a little bit but the rest of everything is done so well! I think the best way to enjoy this episode is to watch The Trouble with Tribbles first cause otherwise a lot of the callbacks are going to go over people’s heads.

But it’s not like people can enjoy this one on its own. There’s a lot of funny-bunny scenes that make sense even if someone didn’t watch anything out of TOS. Dax gets a little… comfortable with an old-school tricorder. Odo (Rene Auberjonois) goes full-on detective and gets stood up for a Raktajino. Bashir and O’Brien get schooled in how elevators work. And there’s just so much to see in this episode.

But this is where the awesomeness starts… 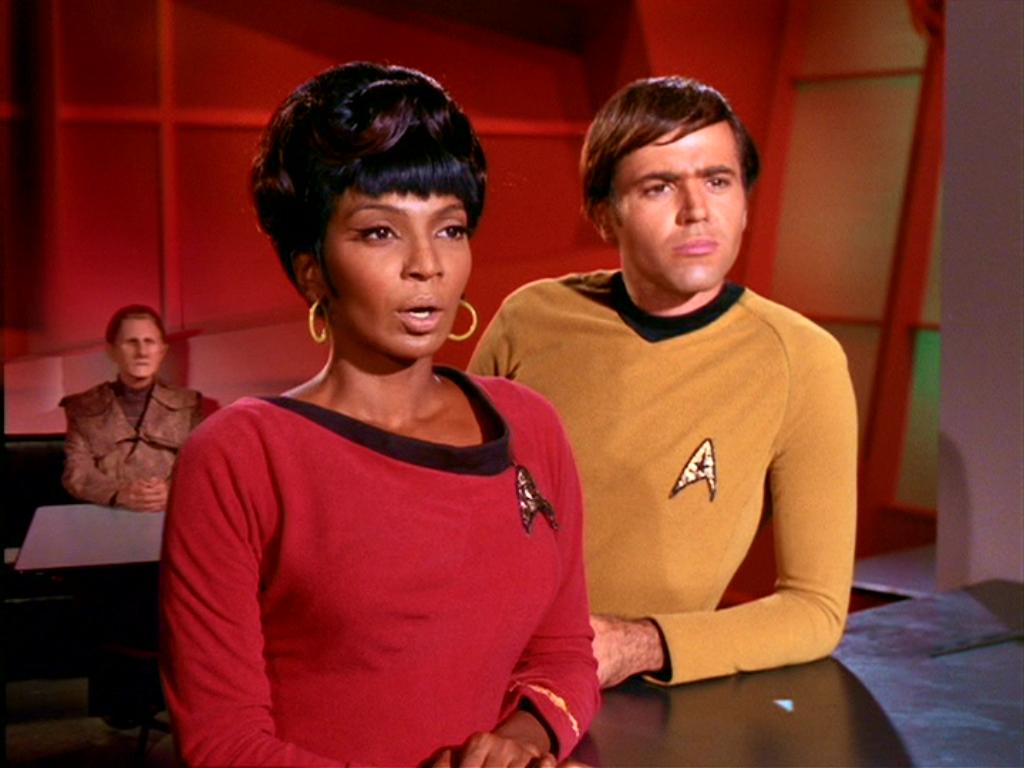 Now… if you haven’t heard about tribbles… let me let you in on something. Remember Lorca (Jason Isaacs)? Lorca used to have a tribble. Klingons had a long and violent war with a tribble. When the Captain got infected by a bug on Star Trek: Timelines, he got turned into Tribbl-us of Borg. Put everything together and you’re going to agree with what I’ve got to say next.

Tribbles are the most evilest species in the whole galaxy.

I’m on the side of the Klingons on this one. I hate tribbles and I totally don’t have a tribble plushie (which makes sounds and everything and was more expensive than I thought it’d be) at all. If I had one I’d only have it around so that I could KILL it (and not cuddle it!). All they do is “consume food and breed”. There’s a reason they were “once considered mortal enemies” of the Klingon Empire!

And there’s this one scene where Sisko does a big NO NO. He stops Dax from visiting one of her (its?) old friends and the ending makes me think of Sisko as a totally not nice person who has his own fun and stops others from having theirs.

Bashir flops around like a sad fish trying to get into a lady’s pants and O’Brien calms him right down. And whoa whoa whoa! It’s Kirk (William Shatner) and Spock (Leonard Nimoy)! Dax gets the hots for Spock and Sisko has to get Dax away from that pointy-eared, green-blooded genius.

And then we get to one of the most fun segments in the episode. The pub brawl.

Now anyone who knows me irl knows that I’ve scrapped around a fair few times. It’s really fun breaking out the judo when people go “oh you’re just a girl”. And this episode has one of the most fun brawls ever. Some drunken Klingons (they sure know how to drink) start on Scotty (James Doohan) and Chekov and a big old fight breaks out. But here’s something important! 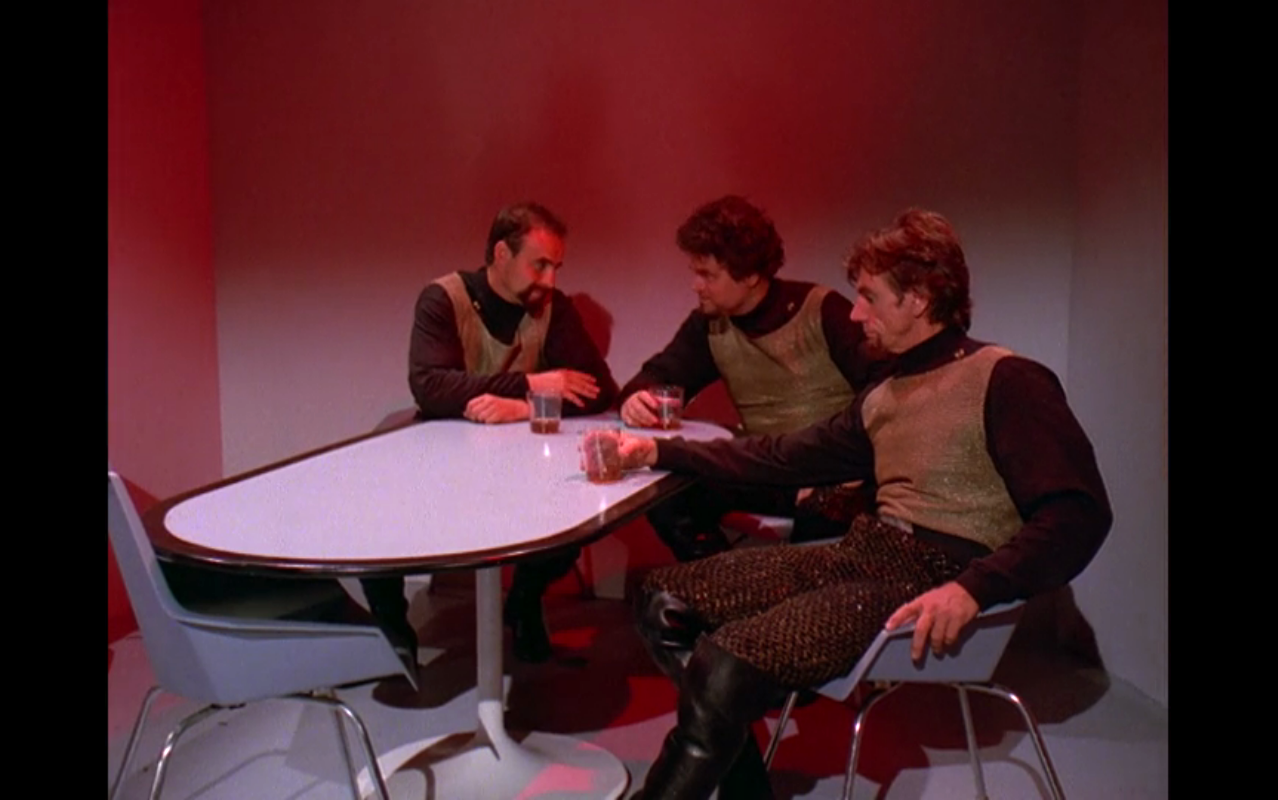 Before Discovery went and turned the Klingons into Uruk-hai, there were a few updates to their look. Everyone’s all surprised that these muppets are Klingons so of course they ask Worf what’s up. And he tells us what he’s supposed to tell us and goes:

They are Klingons. And it is a long story.
…
We do not discuss it with outsiders.

But lets get back to the fight! Scotty decks Liam Neeson’s Klingon uncle one and everyone starts throwing down and chucking tables. The DS9 crew get involved even though Odo tells em to calm the [BLEEP] down. Worf starts decking Klingons left right and centre. The bartender Jack Sparrows his way outta there. And Worf and Odo run Darvin down.

This episode is plain fun. That’s all there is to it. And the best thing is that it gets one of the Orbs out of the way as well! There are tribbles everywhere and the episode gets really tense near the end because of something that might just go boom. History gets reset, Dax talks about McCoy (DeForest Kelley) and Sisko goes and has his fun times with Kirk (and gets an autograph!) and I think Spock figured something weird’s gone on.

The Temporal Investigations team bugs off and everything’s all good and kosher.

So yeah. Trials and Tribble-ations is one of the best Star Trek episodes ever! It’s fun. It’s well-made. And it brings two completely different parts of the Star Trek franchise together. I’m not just recommending this episode. I’m telling you to go and watch it yesterday.

It’s a whole lot of fun and has a whole lot of cool things happening in it. Up until Star Trek: Enterprise messed up with trying to explain why Klingons look different again, this episode was the best explanation we coulda had. It feels like an important part of TV history and I don’t think any show had done anything this ambitious before DS9 went and did it. And that’s where I’m leaving the review! It’s highly recommended by both of us on here and you really should watch it if you want a fun hour to spend with your telly (or laptop)!

Up next we’ve got the next Star Trek: Discovery episode, followed by either Star Trek Into Darkness or the Crow’s favourite Star Trek episode to finish our celebration off with. I’ll see you once those are done.

Until next time… hugs and kisses and love you lot loads! I’ll see you on the other side! 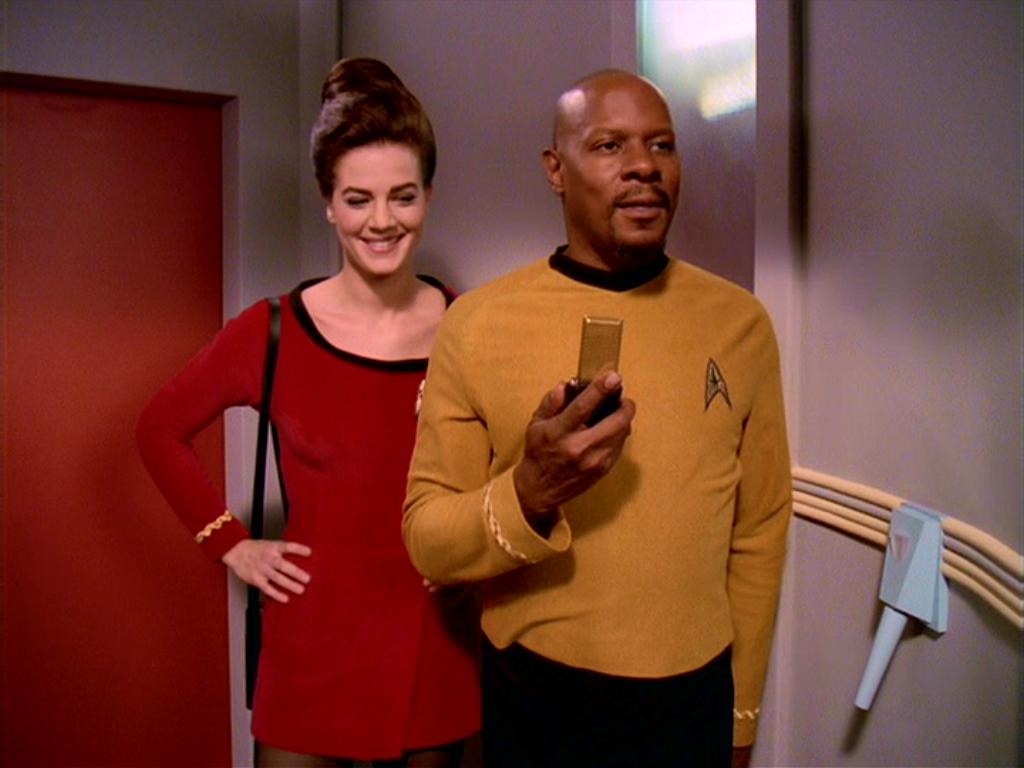 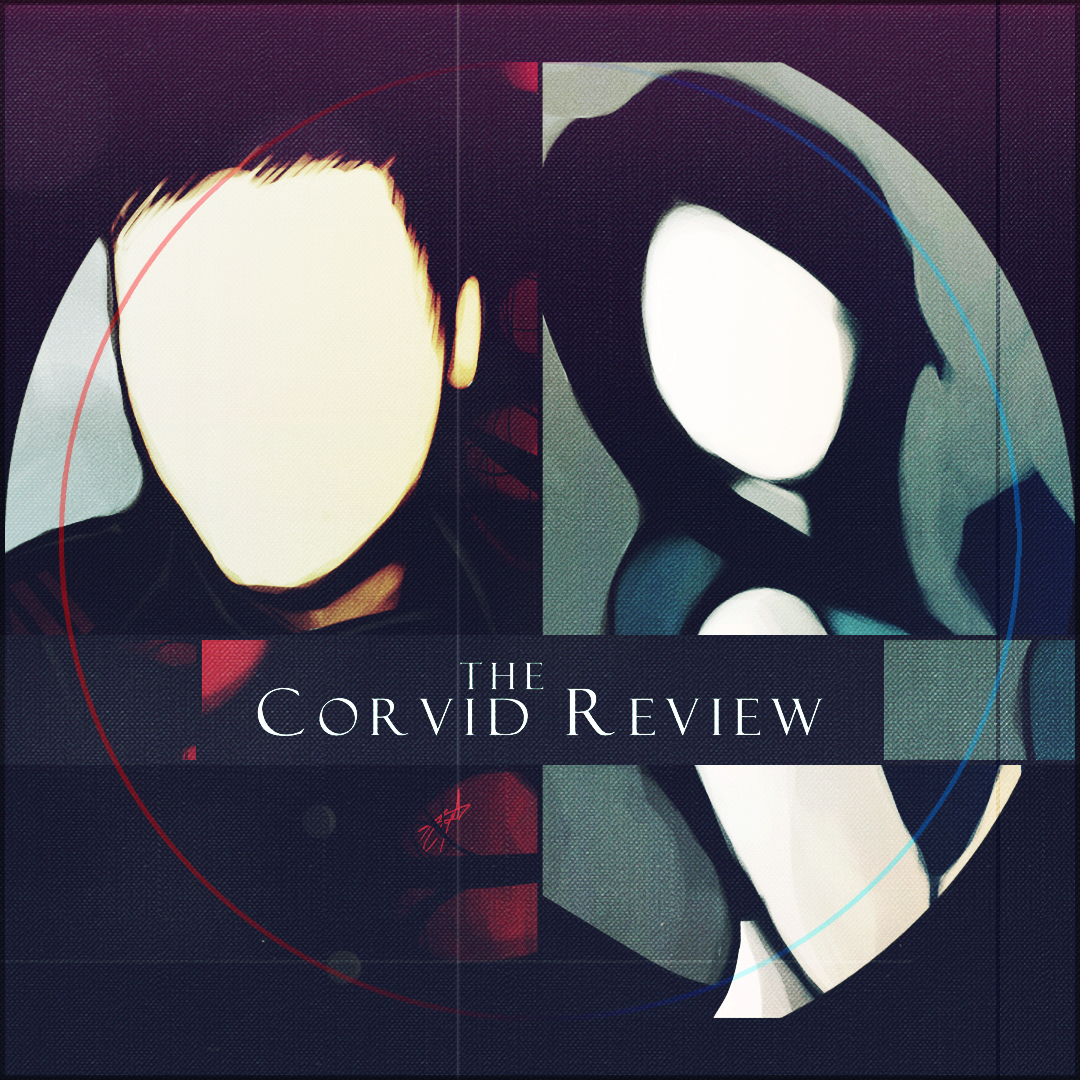 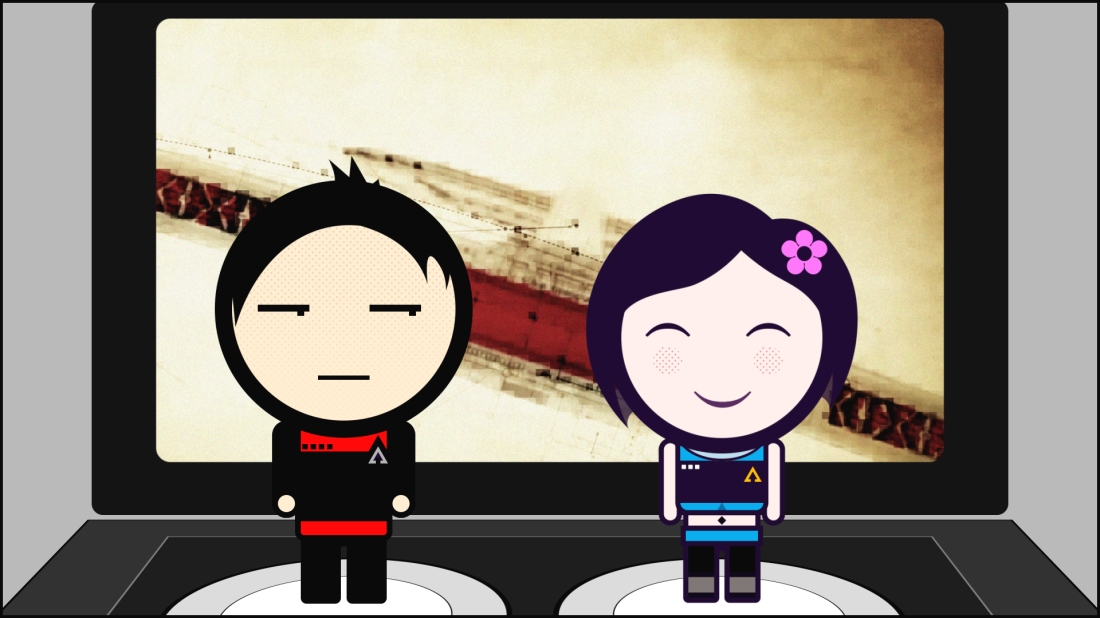 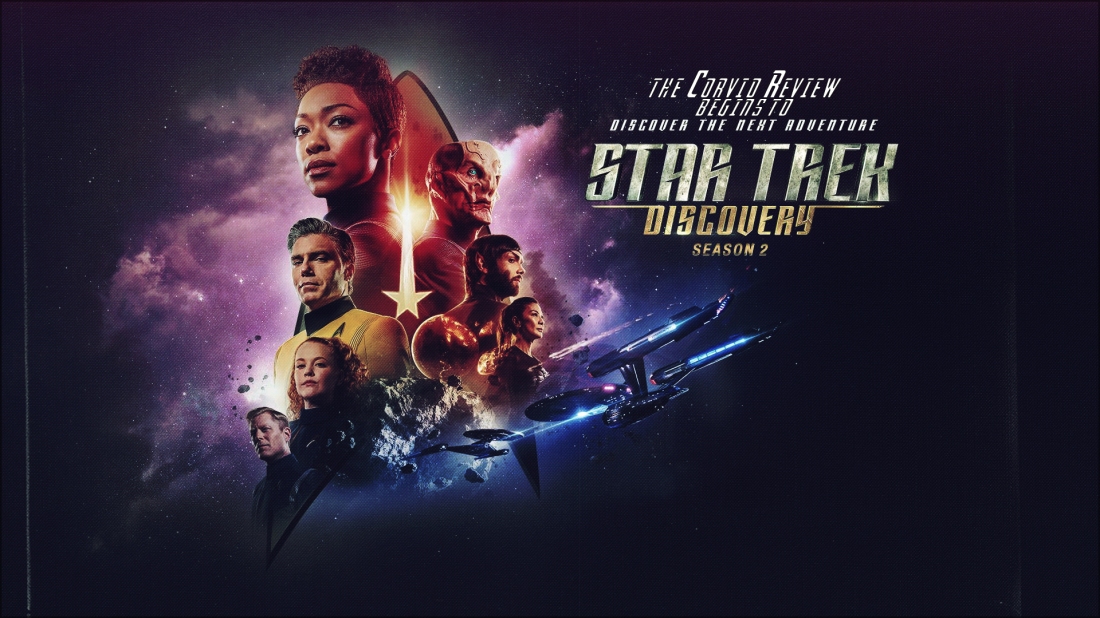