Review: Us [2019]; An Interesting Premise, Studied in Mirrors (Spoiler-Free!)

Originally, the Azure-Winged Magpie was to have reviewed this movie ahead of its release. Owing to her ill-health and my unavailability (at the time), we’ve had to wait until the wide release of the movie for a review. We’ve previously mentioned how Us was one of our Most Anticipated movies of 2019, and I can’t believe I had to wait so long before I got to talk about it.

With all of that out of the way, let’s take a quick, spoiler-free review at the “new nightmare from the mind of Jordan Peele”: 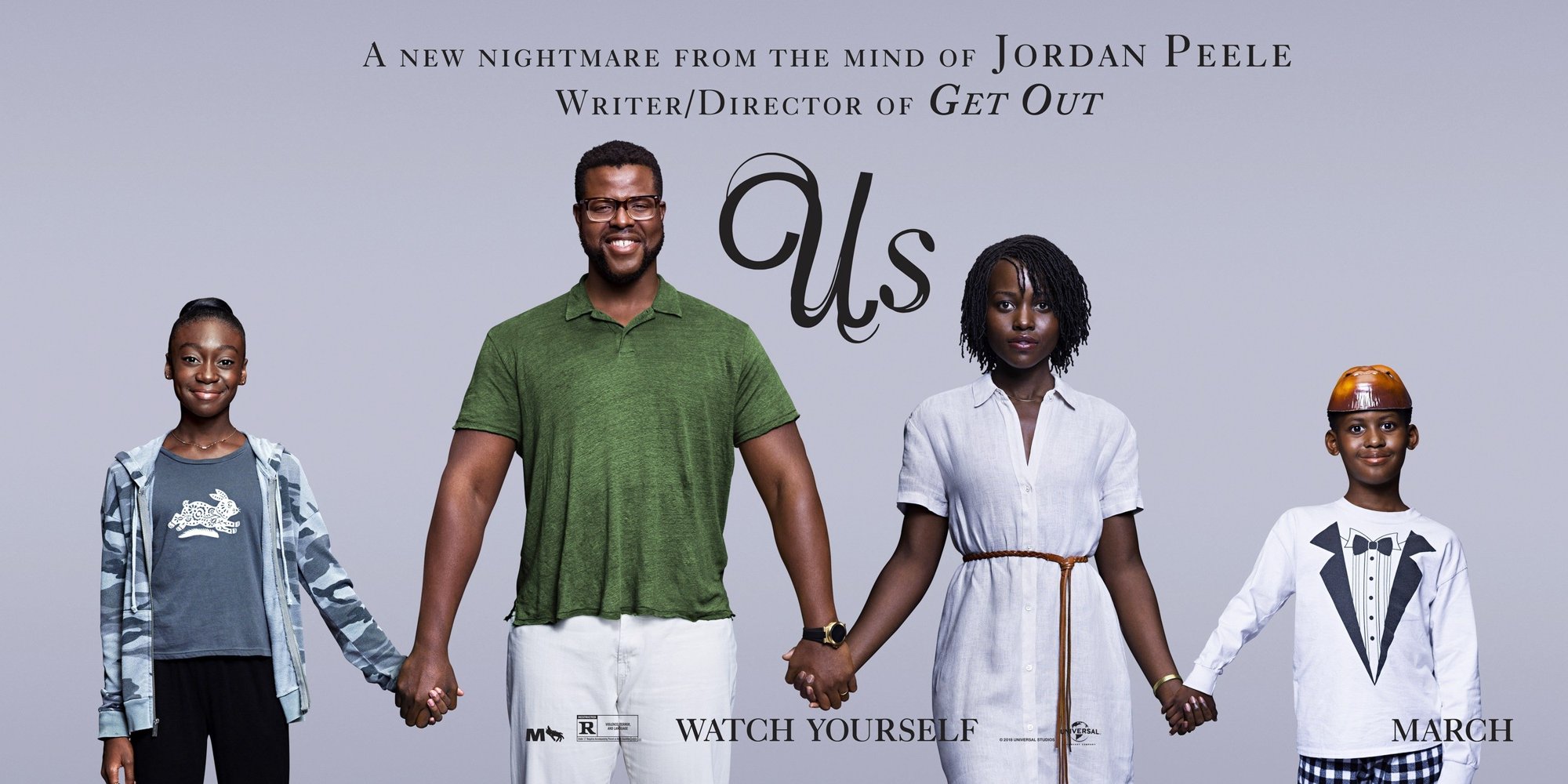 It’s always difficult to review a movie like Us without spoiling a great many things. However, I can say one thing for certain: like Get Out before it, Us doesn’t leave one with questions as far as the story is concerned. It’s a neat little package that doesn’t pretend to be something it’s not, and while some of the social commentary might slip by a few people, I don’t think it’s something a second watch wouldn’t clear up.

It is, however, an inherently Western movie. I’m not sure if the full blast of the nuance in the movie will work for viewers who aren’t as exposed to recent Western (and specifically American) history. But then again, the core audience that this movie is intended for is an American one. I myself am not American, but I did live in the United States for a few years, and have a general interest in the post-TV era of social history (mostly oddities and events spurred by the age of mass media). To me the movie was quite lucid. However, to the friend I watched the movie with — who is as British as Chicken Tikka Masala on a Thursday night down the pub and has zero interest in anything featuring stars and stripes — a lot of the social commentary fell on rather deaf ears.

That is not to say, however, that Us is a movie loaded with social commentary alone. It’s rather a much more direct thriller movie than Get Out ever was. The social commentary, even if it may fall on deaf ears, is quite straightforward and doesn’t come as hidden as it might appear. There should be no issue in enjoying the movie for what it is, but that’s where we come upon a snag.

The snag is that I take slight issue both with the mechanics of the story and how the ending was delivered. I’d like to remind you that I’m not spoiling anything about the movie in this post, but I will touch upon my issues with the movie once I’ve covered the broad strokes of the plot.

In Us, we follow the Wilson family. They are (in the order pictured at the beginning of this post): Zora (Shahadi Wright Joseph), Gabe (Winston Duke), Adelaide (“Queen” Lupita Nyong’o; played by Madison Curry in flashbacks), and Jason (Evan Alex).

The family are on vacation in Santa Cruz — a place with deep connections to Adelaide’s past. A long time ago, when she was a little girl, she was separated from her family and saw something that ties into the story playing out in the present day. And it doesn’t take long for the movie to launch into what it is that comes back to haunt them (the trailers have given as much away). The family are haunted — or rather, hunted — by doppelgängers of themselves. The names of the doppelgängers are (respectively): Umbrae (Shahadi Wright Joseph), Abraham (Winston Duke), Red (Lupita Nyong’o; Madison Curry in flashbacks), and Pluto (Evan Alex). They are part of a group known as the “Tethered”, and they share a mysterious connection with the Wilson family — a connection that has grown into a vendetta.

Some might be confused by the nature of this connection, and I share a certain level of frustration with it, too. The movie uses what I’ve — for the past twelve years — called the “Never Let Me Go mechanic”, and while it’s fine as far as the world of Us goes, it raises a lot of questions as to the exact mechanics involved in the process. Maybe I’m nitpicking, but for a good deal of the movie, I found myself wondering how exactly the Tethered work. There are many variances in the connection (variance: that word appears again within 24 hours), and the connections seems to be rather pick-and-choose depending on the scenario playing out. And that puts me in mind that Us is not as well thought-out as it should have been.

The way — the only way — in which it makes any sense is in allegory (which is exactly what it is, but you cannot say that in a movie), and it didn’t translate so well to the world in which the characters of Us inhabit.

It really isn’t as damaging to the movie as I may have made it sound, but it is something that breaks the immersion instead of adding to the mystery — especially in light of how the movie tries to explain the nature of the connection in a ‘mechanical’ way.

And here is another issue I take with the movie: there’s a “fulcrum point” for the story, and it’s quite a good one. However, it is foreshadowed so heavily, that by the time we come around to the tipping-point, it’s impact is lost. Every other element of the movie is foreshadowed well, but in this — the most important — case, it falls flat. I pride myself on figuring out twists in movies before they come around, but I really didn’t need to, here. Starting from the rather unexpected “intro sequence” to the movie, the movie signs away its sequence. The only thing that saves it is the power of the performance behind it, but I’ll leave my annoyance at being spoon-fed there.

Us is a fine-looking movie, and it certainly packs a punch. There are particular scenes which I felt were brilliant, and none which I thought were bad. Winston Duke (who I’ve previously mentioned liking ever since Person of Interest) sums up a certain visual aspect of the movie to those who might not be familiar with the “Hands Across America” imagery (I, myself, was only vaguely aware), and has a decent-enough performance. All three younger actors perform admirably — far exceeding the usual expectations that come from actors of their type, but ultimately, it’s Lupita Nyong’o who steals the show.

She is nowhere near the heights we’ve previously seen her (I’m specifically talking about 12 Years A Slave), but she turns in a solid shift. Again, the screenplay sometimes lets her down a little, but she manages to salvage a menacing performance nonetheless as the mother and protector of the family.

At the end of the day, Us is a thriller movie and no more. It’s not bad, but it’s nothing great. It’s a solid outing for director/writer Jordan Peele, but doesn’t rank as high as Get Out did (which I also thought was fine). While it’s unfair to compare the two movies, now that I’ve had some time to mull things over, I think Get Out remains the better work of cinema. And just to make this clear: Us is messier, and gorier, but it’s nothing that will turn seasoned stomachs.

Us is nowhere as tight-knit as its predecessor was, but it is by no means a poor movie. I don’t want to call Us middling, since it certainly isn’t, but it might have been so if not for the crisp visual narration and the slick movement of the story. Additionally: although I do take issue with the ending and how it was delivered, the final moments of the movie are excellent and serve as a perfect footnote to the chaos we’ve just witnessed.

Overall, Us puts me quite in mind of a short manga story that I reviewed along with a much larger work some time ago. I’d highly recommend Army of One to anyone who’s not read it, especially since we’ve been talking about Us. It’s fundamentally different, but I think it works in this context.

A good movie, but it’s not as good as I thought it’d be. Us does come recommended as far as I’m concerned because I feel it’s a fun watch, but I highly doubt it’ll be ranking anywhere near our top movies of 2019 when the Oscine Awards roll around next year. That, I can assure you.

Update; 11/04/2019: As an added bonus, here is some fan-art for the movie, made by the incredibly talented Trent Shy:

Update; 19/04/2019: As another added bonus, here is some more fan-art for the movie, made by the also-incredibly talented Ben Gore (@basedgore):