Captain‘s log, Stardate 96726.59: It’s quite unfortunate that this week, I’ve been late to my weekly viewing of Star Trek: Discovery. It’s nearly 2000 hours — four hours later than my usual review session. In light of that, I’ll skip any further details on the log, keep in mind that I’ll have to cut things short, and jump straight into: 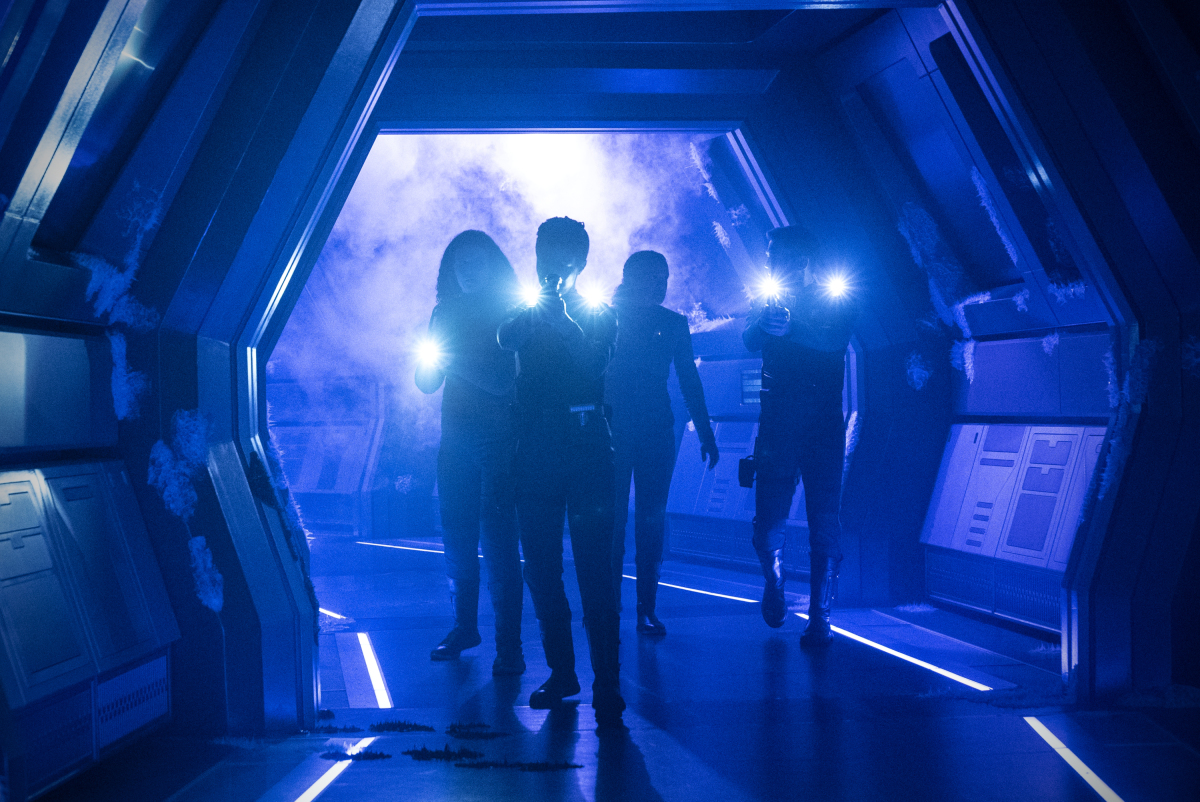 Saints of Imperfection is yet another stop in the Search for Spock. At this point, we’re three episodes lacking red lights, and despite the grave misstep that was Point of Light, Star Trek: Discovery seems to have found it’s feet a little bit more — even during this pause in the quest; and thankfully, it seems this time the pause is forced by Spock (Ethan Peck; yet to appear) himself.

The episode features Section 31 rather heavily — an element I’ve always maintained should be handled in the smallest doses possible, but in a strange twist, I don’t mind their presence in this episode all that much. Some of the Georgiou (Michelle Yeoh) scenes are handled with a generous side of cheese, but it’s good cheese (I’m very much a Red Leicester crow), and quite appropriate for the former Terran Emperor. Her theme has rapidly grown on me since the groan-inducing Mirror Universe episodes of Season 1, and I liked its use in this episode. Her carefree, brash manner is also something that is explained — in a manner of speaking — in the episode, and it’s as good an explanation as I required. Leaving it to the performance of the formidable Ms Yeoh was a good idea by all metrics, although I’m still not entirely happy with the “black badge” scenes. Leland (Alan van Sprang) also manages to grow a little more on me, and he’s finally given a little bit of depth in Saints of Imperfection. Ash Tyler (Shazad Latif) is returned to the Discovery as a liasion between Starfleet actual and it’s Article 14 spin-off organisation — which I also argue is best left as not being an organisation — and with him comes one of the episodes core themes.

The theme here is one of “getting the gang back together”. It explains some elements of the mycelial network (very vaguely, and I’m taking these at face value) and how Dr Hugh Culber (Wilson Cruz) ended up there. There seems to be a large disconnect between Stamets (Anthony Rapp) as he viewed Culber when he found him in the network and Stamets heading into this episode. It’s almost as if his own knowledge of what’s going on has shifted between then and now, and I found that bothersome. It’s once again a callback to the “unplanned scripting” (as I believe I called it) of Discovery Season 1, and I’d very much like the team behind the show to sit down and sort this out (which, as far as I’ve been told, is on the cards). There’s much to like about Star Trek: Discovery. It’s a decent start, but when one sits down and “unpacks” it — tries to form a definitive core narrative out of what we’ve been shown, and  — the show falls apart in places and is overall rather weak. The Ash/Voq storyline, the Mirror Universe storyline, the insanity of the mycelial network and the shifting “science” of it — these are all weak. This does point to troubled production — which Discovery has experienced, but it’s rather disheartening that the team still hasn’t pulled itself together after so long. We live in an age of “high art” TV, and better is expected from any iteration of Star Trek. While this rant is not directed towards Saints of Imperfection (how ironic), every episode featuring the mycelial network has the chance to “ground” some of its elements, and it isn’t happening enough. This episode does clear up some things about the network, but answers no real existing questions, and again displays the casting aside of story elements that plagued the previous season so much.

That said, aside from some basic editing mistakes in the first third of the episode, Saints of Imperfection manages to be a strong episode, overall. I won’t say it’s one of the best episodes of Star Trek: Discovery, but it’s one of the better ones. It manages to make sense of May (Bahia Watson) and features some rather unusually good performances from Mary Wiseman’s Tilly. Stamets does a solid job and Michael Burnham (Sonequa Martin-Green) is again just… there. We know nothing new about Saru (Douh Jones) since his “endurance” in An Obol for Charon, but Pike (Anson Mount) has some striking scenes. The faith undercurrent culminates in a nice moment at the very end, but it’s such a minor element that it could be ignored wholsesale and the episode would’ve been none the weaker.

The Glenn is given an explanation, and while the unnamed Section 31 ship continues to bother me, I must admit that it’s design is quite nice. The interior does make for a more “working vessel” feel. Additionally, Admiral Cornwell (Jayne Brook) has a very enjoyable few lines in her brief appearance (is she the only working admiral in Starfleet?).

All-in-all, Saints of Imperfection comes recommended by both of us at The Corvid Review. While the theme is still to seek out Spock and solve the riddle of the “Red Angel”, this is another good step in those directions.