As originally planned, reviews for Velvet Buzzsaw and Alita: Battle Angel were scheduled to follow the “grand ceremony” we put on for our 1st Annual Oscine Awards post. This did not happen.

Things have been complicated on The Corvid Review, lately. The Azure-Winged Magpie’s been returned to “sickbay”, and won’t be able to resume “Star Trek Month” for a few more days. I’ve been away from the blog (and quite a few other parts of my life) for four days straight, now, for reasons the Magpie’s mentioned before. While some scraps do exist and can be found on the internet, I unfortunately cannot divulge any further information about the project I’m working on other than it’s coming along much better than expected. We are only on Day 4. It’s too early by any metric.

However, in light of the fact that the blog has run silent since our awards “ceremony”, I’ll be stepping back in to finish up my review for Velvet Buzzsaw (only needs a little visual touch-up). Following that, we’ll be hosting another “Theatre Review” written by our newest member the Vulture. These posts will follow tomorrow and day after, after which point the Azure-Winged Magpie will hopefully be able to return to her duties, starting with her review for Alita: Battle Angel.

With all that said, let’s continue our search for Spock by chasing him into… 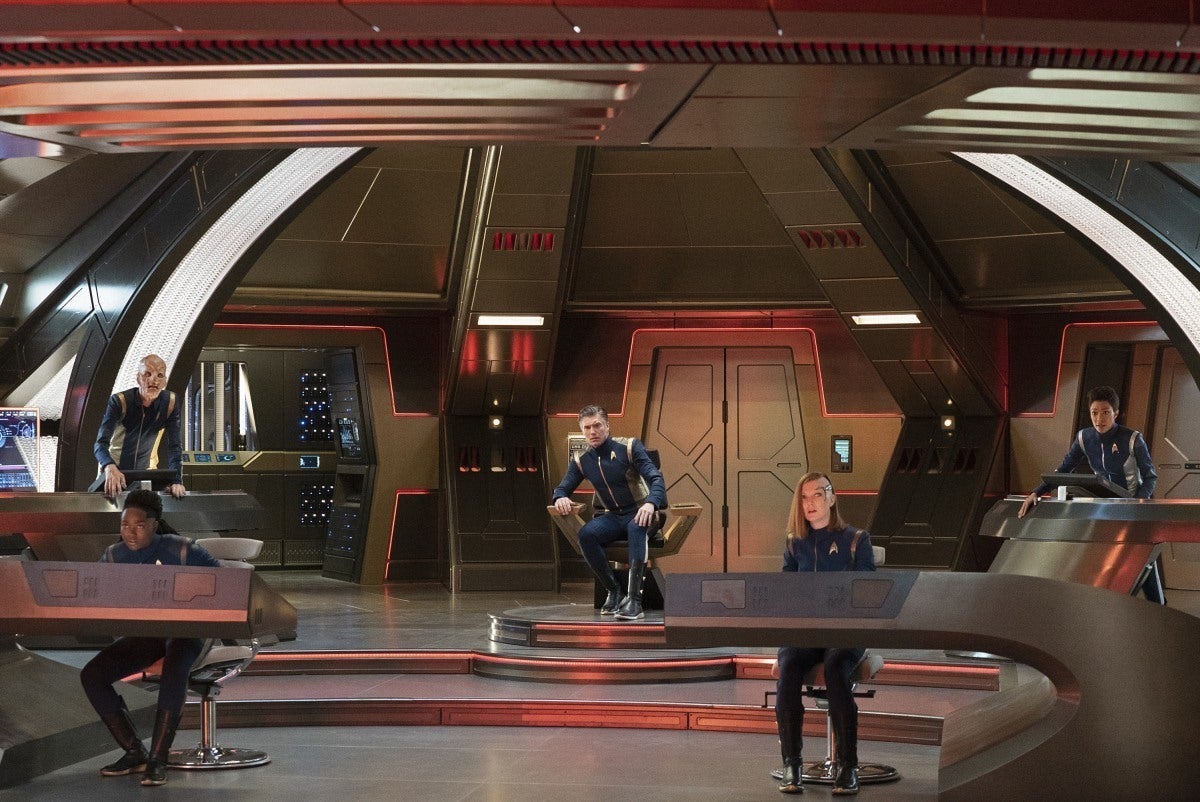 I made a point earlier that the Star Trek: Discovery episode Brother had pulled an entire sequence straight out of the books of the J.J. Abrams-led “nu”-Trek series. And in An Obol for Charon, a similar sort of “borrowing” rings through.

An Obol for Charon is based on a few plot points pulled from Star Trek: The Motion Picture, and borrows minor elements (themes, plot-points, etc.) from Star Trek episodes of the 90s and early 00s. The question is: does the episode manage to do so in an interesting way? The answer is both yes and no. Yes, because I like some of the story “beats”, and the duality that’s played to varying degrees around these beats; and no, because we’ve seen all of this before.

Our starring man in this episode is Saru (Doug Jones), which is always a welcome point — even as the Discovery sees itself facing a (red-ish) entity/object that has put itself in the way of their pursuit of Spock. And yes: the “quest” continues to stay on hold. There is much Treknobabble to be heard, and while most of it’s quite good, there are some glaring leaps in logic that the episode makes. Most of it could’ve been ignored, but not in light of how nice the Treknobabble is, otherwise.

We deal with May (V.A.: Bahia Watson) once again, and her intentions are made clearer. I’m still holding out for Lorca (Jason Isaacs) to return by the end of the season — even if just for an appearance, but it seems that the team behind Discovery is setting up for the eventual closure of the mycelial network from the Star Trek lore. I’m still not overly enthused by this particular plot element, but at least we’re going somewhere. Jett Reno (Tig Notaro) returns, and while I continue to question the conspicuous absence of a Chief Engineer in all-but-name, she continues to grow on me. The interplay between her and Paul Stamets (Anthony Rapp) is a joy to watch — despite the leaps in logic I mentioned before — and I’d like to see them teaming up for the future. 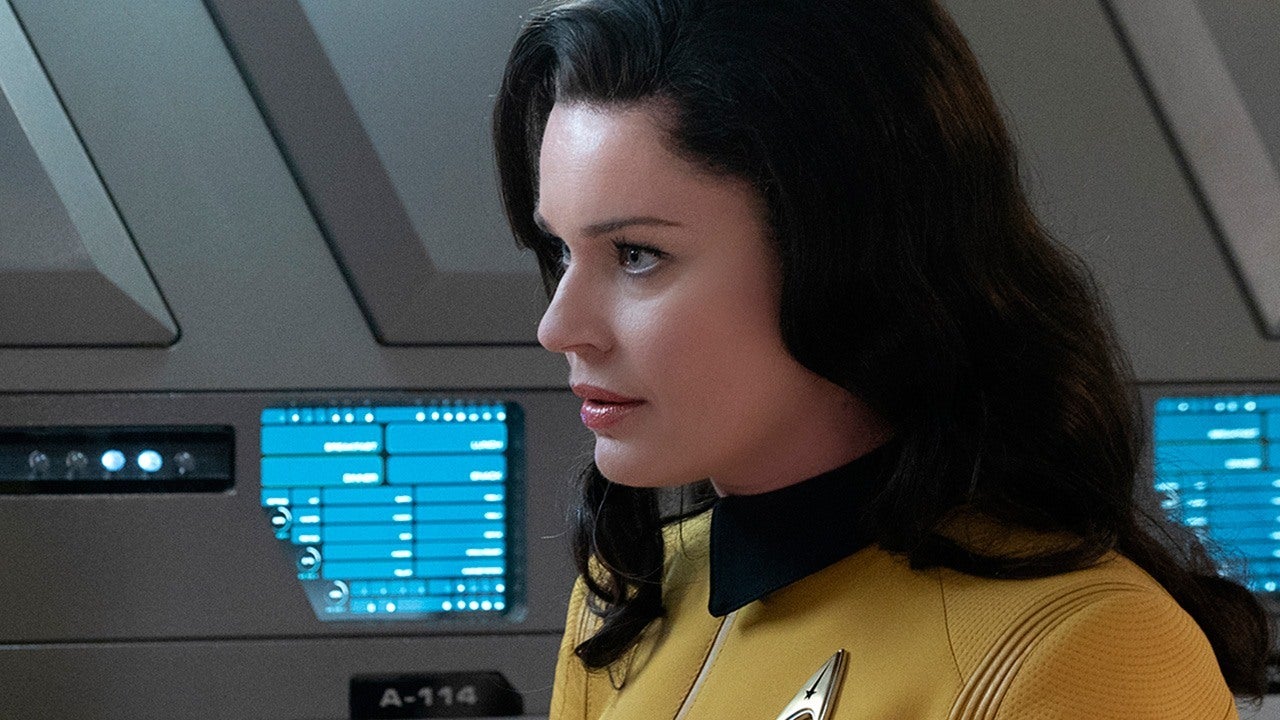 “Number One” (Rebecca Romijn) makes a brief appearance, and the issue of holograms in Discovery is “dealt with”, I suppose. It’s never been a problem for me, but considering I’ve… discovered certain individuals on the internet who seem to do nothing with their lives apart from nitpick the episodes and decry that the production of Star Trek: Discovery is an act comparable to human rights abuse, I’ve decided to include that tiny moment in this review. I’ll be talking about these individuals in a separate post at some other time.

I must also commend Number One on her choice of meal aboard the Discovery. Number One seems to be a woman after my own heart. Due to the past year’s health complications, this is a meal I cannot tell my doctors I can indulge in, but I do nonetheless. I would’ve left a recipe below, but rather than doing so, I’ll leave you with a tip: make a spice rub with: two drops of olive oil, 1 part salt, 2 parts smoked paprika, 1 part roasted cumin powder, 1 part garlic powder, ½ part sugar (as little as possible, but make sure to include it), 1 part dried chives, and 1 part dried oregano for your chips/fries.
You’ll thank me later.

Some of the other non-human characters have lines in this episode, and while they’re barely there, I do like their inclusion in their brief scenes. We finally hear Linus (David Benjamin Tomlinson) speak, and it does seem that Nhan (Rachael Ancheril) is here to stay, which makes me happy. I would also like to call for a moment of silence for the three salt sellers that sacrificed themselves for Saru’s coffee. The amounts of salt that our favourite Kelpian uses would make even the Swan(!) blush.

I would like to draw attention to the scenes immediately following the [mimics explosion] at the end. I don’t think they were particularly well-handled. It doesn’t really seem that the moment has quite “sunk in”. In addition: the crew members standing up doesn’t really work. Perhaps if Saru’s revelation were dealt with in more dramatic fashion, it would, but with the chaos that has just happened, these two moments feel quite subpar. However, the episode is a fun watch — especially as casual viewing. While I would still like the main plot to come into play a little sooner, An Obol for Charon is certainly a much better lull in the action than Point of Light was.

Recently, I mentioned to the Brown-Necked Raven how I find that Sonequa Martin-Green’s (Michael Burnham) performance isn’t one I’m overly thrilled with, and that her strengths in Discovery so far have only been in scenes where she’s sad. This is more to do with how her character is written into situations rather than an issue with the actress (who I’m otherwise not familiar with) or the character in general. She’s yet to actually impress me.

However, her strengths are used to full effect here. Her performance and Jones’, opposite her, make this episode gain a little feather in its cap. The realisation of what the climactic moment means is dealt with a little too strong, and I would’ve liked to keep the ramifications off the script. It’s a negative, but not one which I’ll be taking into consideration for my final rating for the epsiode.

What makes me happy — however — is the notion that a Ba’ul episode is coming.

All in all, a decent episode, with some strong emotional beats (which is a strange, but welcome, relief considering how basic the plot is) — and one that puts us right back into pursuing Spock. It’s now certainly time for Star Trek: Discovery to return the Red Angel to the playing board, and with that in mind, next week’s episode couldn’t come sooner.

We’ll be back soon with more reviews.

Until then, live long and prosper.