Captain‘s log, Stardate 96688.13: Instead of prefacing this week’s episode with our now-standard “Tiny Team Update”, I’ll rather add it to the end of the review.

The first two episodes of Star Trek: Discovery Season 2 have been rather middling so far, despite how lightly I’ve taken them so far. They’ve been peppered with nice moments and haven’t been anywhere close to bad; but they haven’t exactly made for gripping television, either. The first series tried — and tried too hard — to be gripping, and it turned out to be a nearly fatal flaw. However with Season 2, we find ourselves settling into a much more “everyday” pace quite quickly — one that I found myself comfortable with upon completing New Eden.

The first two episodes were chapters in a quest set by the so-called “Red Angel”, and none would be faulted for assuming Episode 3 would offer more of the same (five red lights left to go).

Divert power to the warp nacelles and set phasers to “review”, as we lead the charge into taking a look at:

Point of Light opens with a marathon in which Tilly (Mary Wiseman) is competing — all the while being harangued by the apparition of May (Bahia Watson). There’s something about this scene that irks me, somewhat. Who in their right minds thinks it’s a good idea to hold a marathon on a working starship? It might be a minor gripe, but it doesn’t stand to reason that these elements of the training programme would be conducted on the Discovery as it investigates the red lights. But whatever the case: Tilly is spurred to a win by her supreme annoyance at May.

I mentioned in my previous review that I wasn’t overly keen on “little miss green mycelial pea”, and my lack of enthusiasm only grows in this episode. While I’m pleased with having “called it”, and am interested to know what she’s up to, the storyline feels distinctly like something out the earlier episodes of Season 1 — too quick and too flat.

Some jargon is thrown around, and it’s much more muted than Star Trek usually is. The “mystery” behind the little pea is explained within the internal logic of the episodes so far, and we have no problems there. I’m only really interested to know whether or not this has any ties whatsoever to Lorca (Jason Isaacs) or where he’s gone to. The fact that this storyline effectively takes up a third of the run-time of the episode just serves to annoy me all the more (credit must be given, however, to Ms Watson’s performance. She’d be kicked out of my starship within seconds).

Then, we have our story regarding Spock. Unlike the other two episodes, Point of Light serves as a “break” in the quest that expands a little on the universe as it is and on the story behind Spock and Michael Burnham (Sonequa Martin-Green). Amanda (Mia Kirschner) joins the “Search” for Spock and grave accusations are thrown around. Everyone — including Captain Pike (Anson Mount) –‘s reactions to the allegations are rather underplayed; a fact which caught my eye in a rather glaring way. 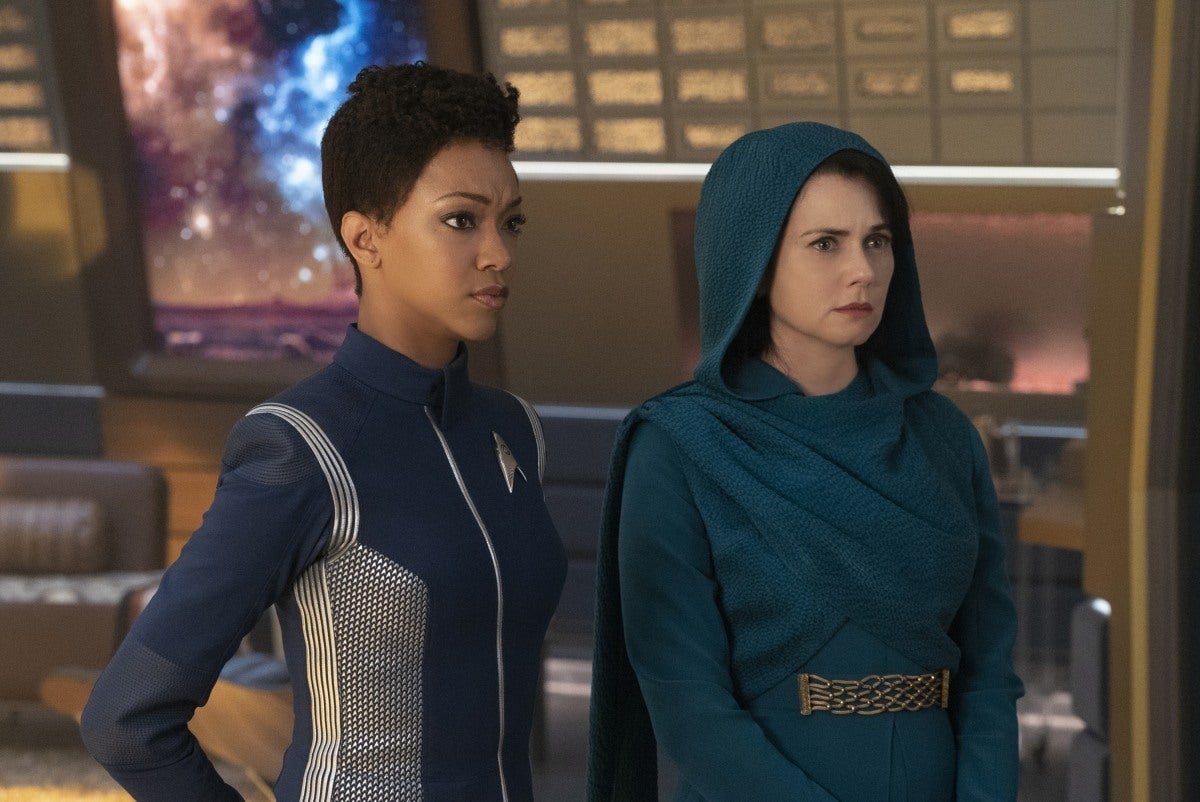 However, while the backstory is fine, most of it is built of things we’ve heard before, and don’t lead to any real answers. Ms Kirschner has some excellent moments, but on the whole, the narrative just ends up being rather unsatisfying. Perhaps, if the episode was given a little more weight to expose some of the secrets the show has been teasing so far, I wouldn’t have been left so out in the cold, but it ultimately serves very little purpose.

And that is, of course, where the real story of the episode comes in: the Klingons.

The redesign continues — only this time towards more familiar territory. The Klingons have “started growing their hair again”, and while it’s a welcome change, there’s one Klingon whose moustache I take grave offence with.

There’s a story that revolves around Voq/Ash (Shazad Latif) and L’Rell (Mary Wiseman), with some supporting Klingons thrown in (once again, the house of Kor is here to stir the pot). These scenes boast high production values and are produced much in the manner of a movie, however they serve that same error that plagued Season 1 so very much: the constant discarding of storylines which have only just emerged.

We are given so little time with Voq/Ash and L’Rell together on Qo’nos that it feels like they’ve achieved nothing. All we have to go on is secondary information and innuendo, and I take exception to this. Can we stop with the set pieces and just watch these people actually deal with L’Rell’s chancellorship for at least the length of one or two episodes? The few minutes that are spent to establish her role are washed away by the brevity of what’s shown on screen.

Ultimately, in the scene where the pair are confronted by Kol-Sha (Kenneth Mitchell), it really does feel like L’Rell hasn’t grown one iota since we saw her brought to Kol (same actor, which explains the aggressive hand movements)’s feet back in Season 1. Her final scenes, however, are spectacular simply because of the lines she is given. It rings nicely with Amanda’s presence elsewhere in the episode. 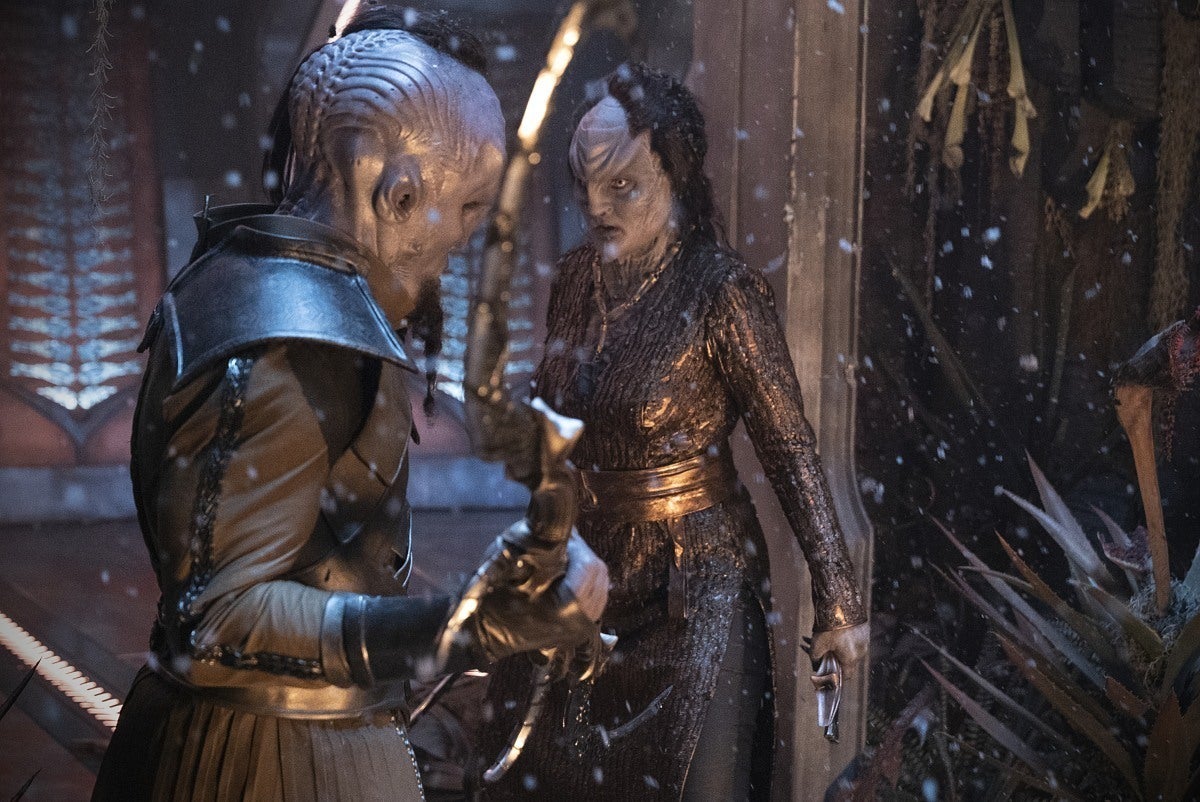 If not for the high production values and the (actually) welcome lull in the quest, Point of Light would be a largely useless episode. And it remains largely missable.

L’Rell gains growth and she’s the only one to keep an eye on. Voq/Ash is whisked away, his time on Qo’nos reduced to nothingness, and now Star Trek: Discovery must address the badges it sported in Context Is For Kings. Tilly and her “alien” friend exist and serve to annoy me. And finally: we are no closer to Spock or the Red Angel than we were at the beginning of the episode. All we know is Burnham is not the only one hunting for Spock any longer.

It’s in the nature of long-form television to have these slower, world-building episodes, but as far as episodes of the sort go, Point of Light is a rather poor example. I don’t — however — hate it. It just failed to do anything to progress the story. Better planning would have seen the story elements of this episodes scattered into the fabric of others, but unfortunately, they have all been collected into this one large forty-minute-long ball.

Not terrible, but not good.

Just as Point of Light has introduced a break in the action of Star Trek: Discovery, we’ll be taking a break from our own “Star Trek quest” on The Corvid Review. Tomorrow, I’ll be publishing a review of Velvet Buzzsaw (which released today), and you’ll next hear from us on Monday, when we release the “secret” post we’ve been working on since the tail-end of last year. On Wednesday, the Azure-Winged Magpie will resume “Star Trek Month” with a review of Star Trek VI: The Undiscovered Country.

Until next time. LLAP.