So earlier yesterday I was a little bit high on medication and posted something that might‘ve just gone into people’s emails… and I hope you lot didn’t see that before I deleted it! I was just worried that the Crow was going into “John Wick Picard” mode (and he is a little bit) but it’s something I guess I shoulda kept hush. So… uh… sorry about that everyone!
So anyway! I’ve warped in from Starbase Bristol 2 to give the Cap’n some time off! He’s really not doing too good and needed a break. And talking about rest…

I’m fine… ish. I’ve been under for like a week with this nasty little case of “poisoning” and I’ve been told that my other Cap’n and I need to take a break from each other. I mean… [BLEEP] it. If I can’t get happy face no more ain’t none of you allowed to get happy face AT ALL.
But anyway! Star Trek Month was MY idea and I’m back to take over! Even if I’m dying over in the back somewhere you ain’t gonna keep the Number One Magpie down!

So let’s warp in and take a look at what’s happened since big bad Khan went and tried to blow up the Enterprise. Star Trek‘s going to feel really different now that Spock’s dead. No? I really didn’t think they’d do something big like that. I mean… killing off Spock? Damn… that’s ballsy. I’m going to miss that green blooded, pointy eared, smarty pants dude in this film that’s called The Search for… Spock… 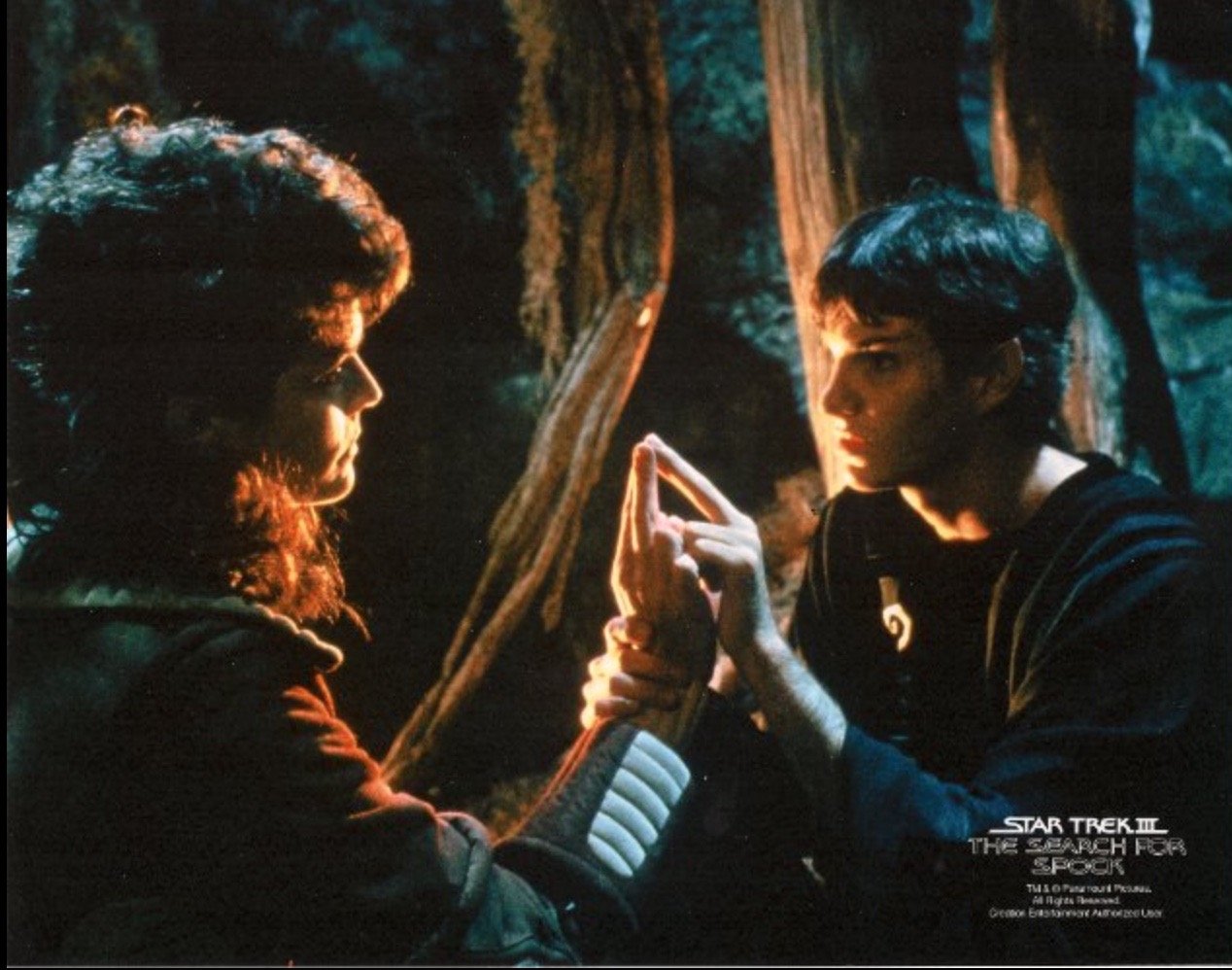 Looking for Lenny
directed by Lenny

TSfS (okay. I’m not using that one again) starts off right from the end of TWoK (nope. Not using that one either). Spock (Leonard Nimoy) went and sacrificed himself to save the Enterprise and they show his funeral again. Some Klingons show up and they’re up to no good (like… when are they?) but we don’t really get to see them for the next half hour so I’ll get to them in a mo.

Bones (DeForest Kelley) is acting all weird and he’s going a little loony upstairs. And he’s going all loony because Spock told him to “remember”. It turns out that Spock’s katra (soul) was installed into Bones and that’s what’s making him go coo-coo. Meanwhile… Spock‘s been “regenesised” into baby form by the Genesis wave and he’s hanging around on Planet Genesis all on his lonesomes until Saavik (Robin Curtis) and David (Merritt Butrick) beam down to find out what (or who) the weird life form that shouldn’t be there is. The Klingons show up and all sorts of things start smacking the fan. Oh, and this time two ships get blowed up (one of them made me cry a little bit but it also gets turned into a pretty shooting star).

The Klingon leader is this guy named Kruge (Christopher Lloyd) and he’s a bit of a dimwit. That’s a good thing. He wants Genesis all for himself but LORDY is he bad at his job. He’s got a mustache to twirl but he doesn’t deserve to twirl it. First thing he does is he kills his girlfriend (or whatever she’s supposed to be). He kills one of his own guys because okay. That Klingon did a bad. He has a cloaked ship and can’t get the drop on Enterprise. He gets almost all of his dudes killed because he decides to send EVERYONE WHO CAN’T COUNT over to a ship that’s COUNTING DOWN. He really really really miffs Kirk off. He gets his… errr “peanuts” popped by Kirk and he ends up getting kicked into some hot soup because Kirk has HAD… ENOUGH… OF… HIIIM! And all of that happens cause this guy is DUMB. I mean… really. This guy has like a peanut for a brain too.

Spock (a whole buncha people play him, cause he grows up a few decades in two days with some funny stuff going on with his face) doesn’t really do much in this one cause Leonard Nimoy also directed this film. And I gotta say he did a pretty good job. This film isn’t half bad looking. He even fixed Vulcan after whatever the heck was going on in The Motion Picture. But hey! At least he gets some… “quality time” with Saavik ( ͡° ͜ʖ ͡°)

When Lenny Nimmy (science officers get to call each other by their nicknames) shows up at the end though, it’s pretty epic. I gotta admit that.

Bill Shatner actually does a real good job in this one. This is the best acting I’ve seen him do. He totally OWNS the role and just when I was sure he was going to go and drop the ball (after someone gets killed), he levels up and keeps it going until the end. Maybe except the kicking Kruge into hot soup bit. That right cracked me up (I’m totally not doing that to any Crows anytime soon).

Uhura‘s (Nichelle Nichols) not really in this one much either but she’s pretty good in the little bits she shows up in. I always want more Uhura and that scene where she shoves this smarmy annoying little pr*ck in the closet had me laughing my ears off. Bones is pretty alright, but it’s a little funny how he was put in the background so much. I really thought this film would have a lot more of him. Scotty and Chekov (James Doohan and Walter Koenig) are pretty cool but Sulu (George “Oh My!” Takei) gets the best “butt-whooping” scene in the film. He’s one smooth sailor. Sarek (Mark Lenard) was okay. He’s not doing much, but hey Sarek is Sarek (I always see that Romulan Commander). 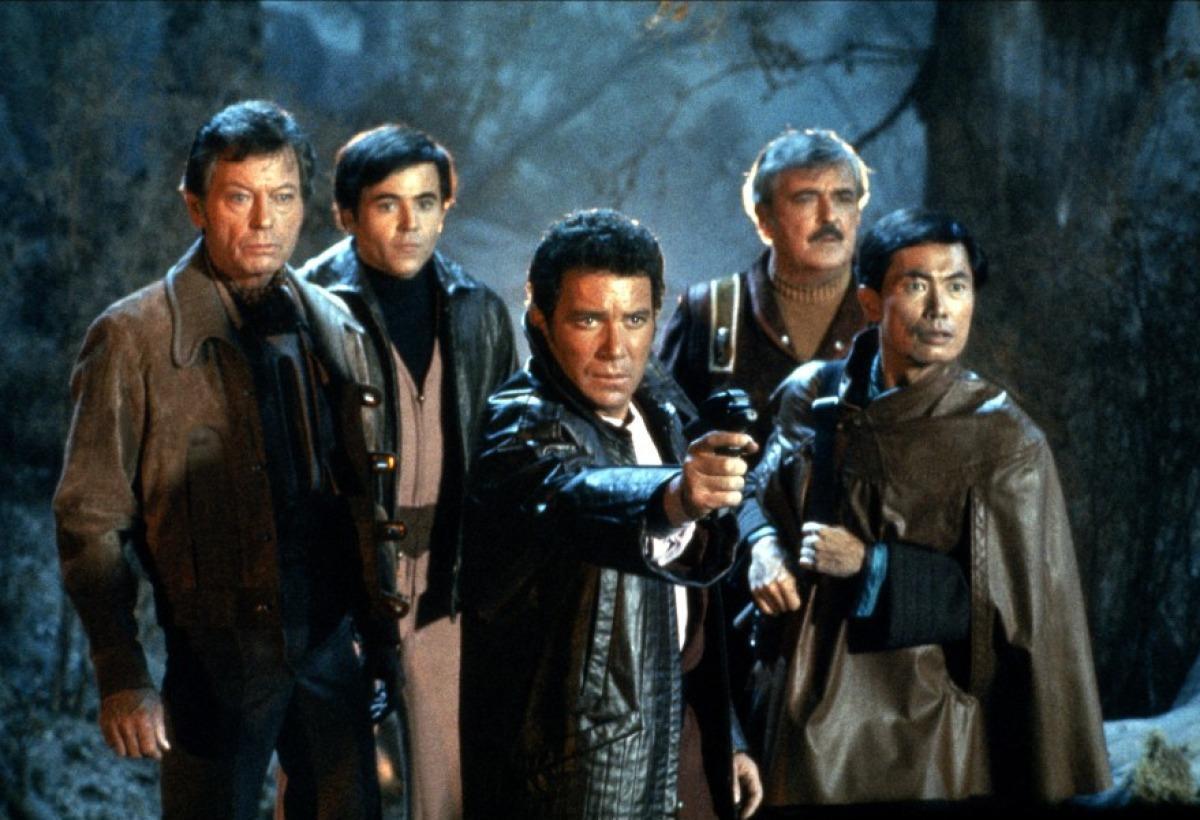 The Search for Spock‘s a cool little film and I’ve always liked it. I know they say that you should stay away from the odd ones out of the Star Trek films, but this one’s one of the better ones out of all of them. Yeah yeah, it’s not as good as The Wrath of Khaaaaaaaaan! but it’s not all that bad. There’s a lot that happens in the film and it all goes by pretty quick. It’s one of those films you can kick back and watch and before you know it… BAM! You’ve spent a good hour and a half already. That’s why I’m saying Leonard Nimoy did a good job directing this film. If a film can go by like that, it’s usually a good thing.

Yeah, the dodo-head bad guy is probably a bad thing, but y’know what? He ended up being so funny that I’m actually alright with him. I don’t know if that was what they were going for or not, but it kinda works. Now that Spock’s all found and the gang’s back together we can all go on adventures again! It’s like Jimbo tells Spock right at the end: the ship’s fine! Spock saved it! We can all go on…

…oh. Yeah. About that… I left something kinda important about that out. But we’re not doing any real spoilers today, so I’ll see you in the next one!

(Time to go and add my ratings to the last few reviews)! 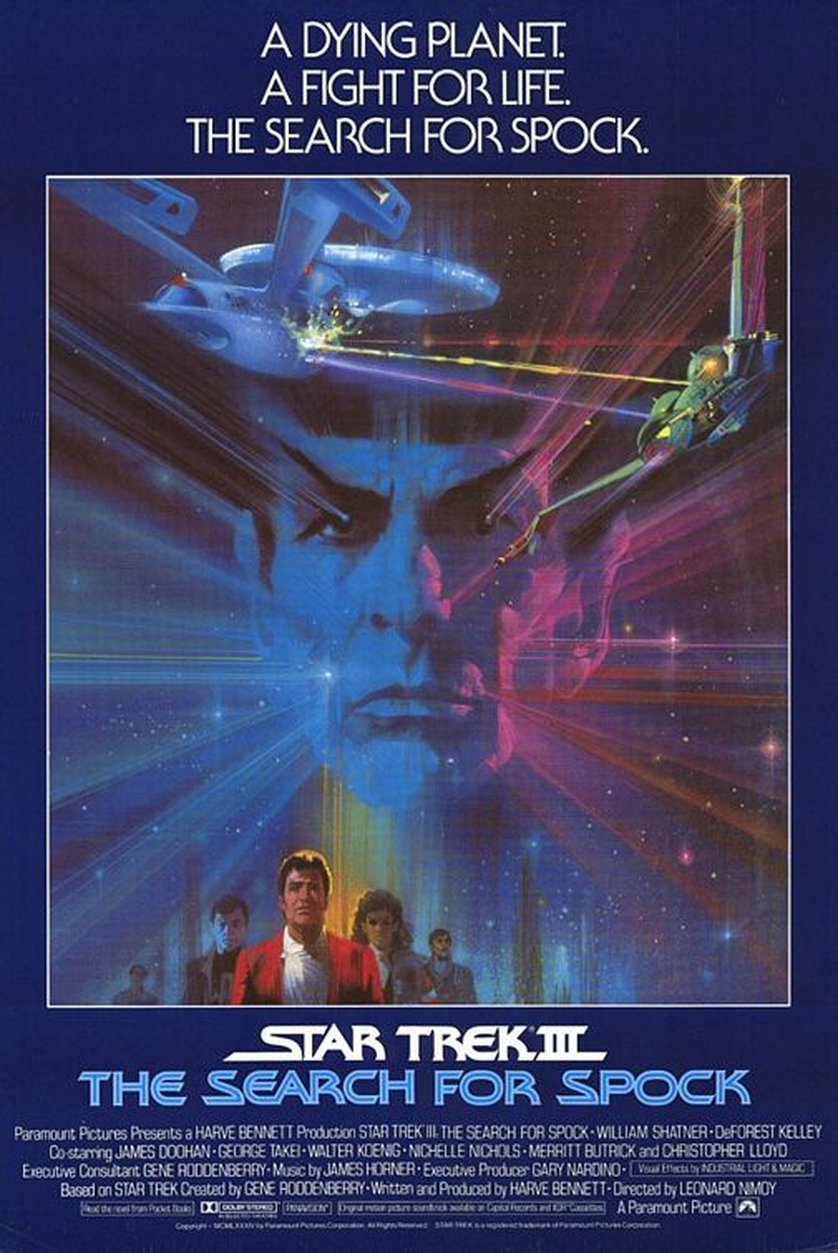