(A brief opening note:) Two years ago, just following the The Corvid Review‘s inception, I promised a friend I would review his favourite movie: The Warriors — which of course I never did. Now, with “Star Trek ‘Month’” looming just around the corner, and our schedule tighter than it’s ever been (bar our “Horror Month” and “End of the Year” pushes late last year), I decide to finally get around to this review (some timing I have). And in light of what I’ve said so far,

sorry, Swan.
(The above individual is not to be confused with “the Swan(!)“.)

To preface this review: I’m a strange one when it comes to movies of this kind. On the one hand, I can sometimes have a soft spot for them; however in general, movies that mix action with “gang culture” simply aren’t my forte. Add to that the facts that I find little to relate to when it comes to the culture that this movie concerns itself with, and that I am distinctly not the target demographic this movie was originally intended for. That said, I pride myself in being able to look at a movie objectively. So let me fire up tonight’s feature, and see what I think of:

The Warriors
Theirs Is A Story of Courage

The first thing that springs out about The Warriors is the comic book styling of the whole affair. This is a movie that wants you to know where it’s coming from, and what it is. That’s always an admirable tool in any film-maker’s arsenal, should it be needed for a movie. However, while it’s generally put to good use, and works as far as the movie’s concerned, there are certain downfalls that come with its use in The Warriors, as small as a problem as I might seem to have with it (I’ll expand on this point later). First, allow me a few moments to talk about what the movie’s about.

Following a short introductory monologue (which includes the word “milleniums”) regarding the story of the Ten Thousand, and a pan across the pages of a “comic book”, we are faced with the dreaded Comic Sans MS, which establishes the events of the movie as happening “Sometime in the future”.

We then jump into an opening sequence that would by any rights be far too long, if not for the movie cutting in scenes that set up the plot. The plot, as it is told to us (or is supposed to be) regards the near-messianic gang leader Cyrus (Roger Hill) and his plans for “the future”. Described in lavish superlatives during the opening sequence, Cyrus has assembled nine representatives each from a hundred of New York City’s gangs in one location. It’s to this assembly that the titular “Warriors” arrive during the opening sequence. There, he plans to unite them under one guiding principle — in order to effectively take over the city from the police (and, by extension “The Man“).

Seems like a solid-enough start to any plot, and no one could be faulted for thinking that this battle of the gangs against “The Man” would be the central driving force for the narrative (despite the opening monologue telling us in no uncertain terms that it isn’t). 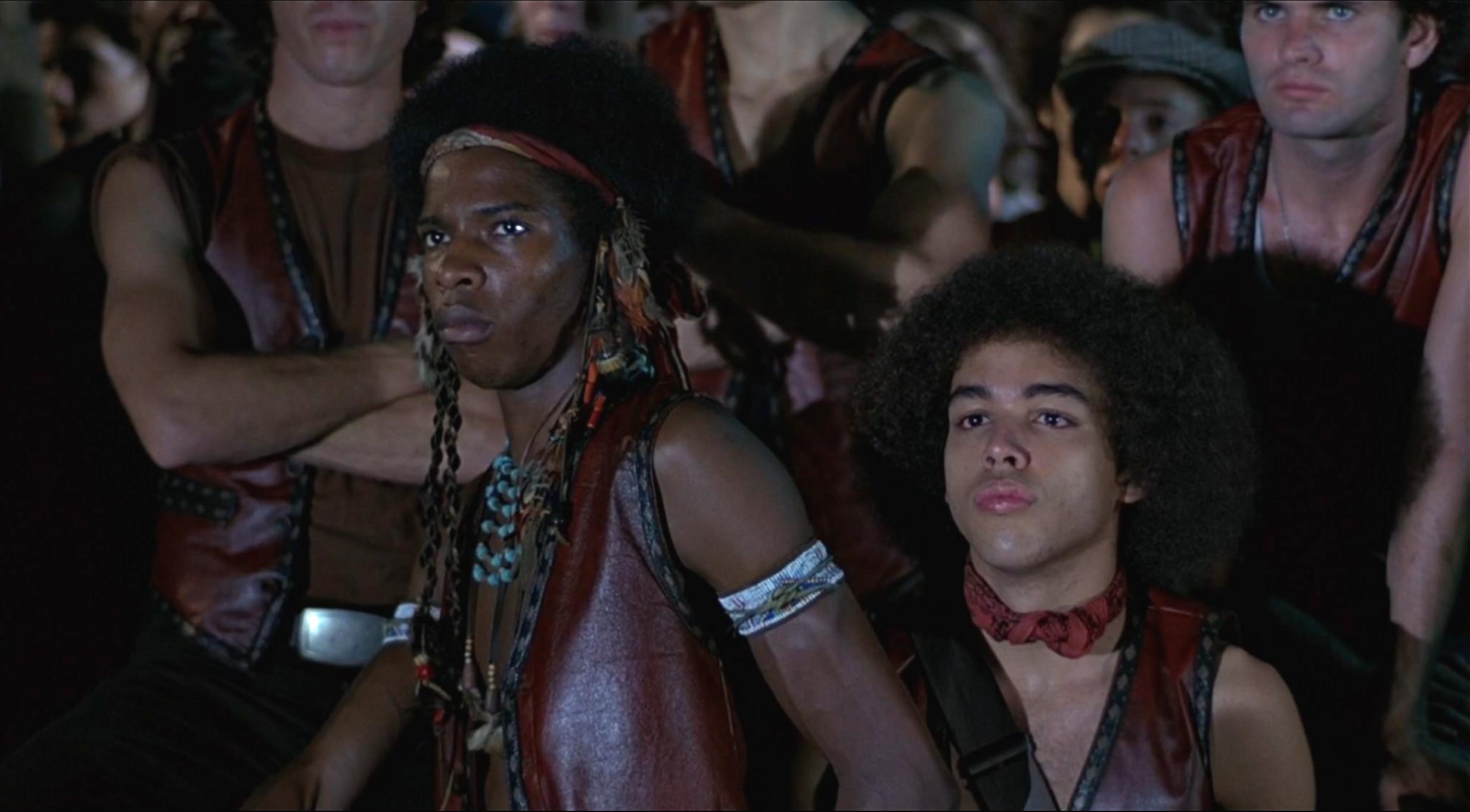 At this juncture, an interesting twist in the tale is thrust into the picture: Cyrus is shot and killed by an unknown assailaint. And while it takes a long time for the characters who are part of the movie’s story to find out who the killer is, the movie denies us the mystery by showing us the assassin in plain sight.

And so, after stripping away the louder, meatier elements of story that exist in the world of the movie, The Warriors slips us into what the movie really is about: the story told in the opening monologue; the journey of the Ten Thousand (or in this case: nine) on their way back  home from hostile territory. And so we follow the titular Warriors on their journey through the streets of New York back towards Coney Island, encountering various rival gangs as they go, unaware for the most part that the Gramercy Riffs (Cyrus’ gang) have put a “word” out on the street about them — leading up to a confrontation with the gang (whose leader is the one) responsible for Cyrus’ death.

One thing that caught my eye during that long opening sequence was the appearance of one James Remar as the Warrior Ajax (who also appears in our “Heavyweight Champion” review of The Blackcoat’s Daughter). The rest of our protagnoists shape up in the forms of Swan (played by Michael Beck, and to speak of irony; our ‘Swan’ is also named Michael), Cochise (David Harris), Rembrandt (the late Marcelino Sánchez), Snow (Brian Tyler), Vermin (Terry Michos), Cowboy (Tom McKitterick), Cleon (Dorsey Wright), and Fox (Thomas G. Waites, who went uncredited for reasons I’ll touch upon soon), along with the unlikely ally the Warriors pick up on their way in the Orphan Mercy (Deborah Van Valkenburgh).

Each of the characters — apart from Cowboy, who’s a gimmick — has a presence in the movie, with all of them having individual traits and voices; and with them, each of the gangs has a voice as well. Not only does it come down to styling and visual appearance, but it reflects in littler things, such as mannerisms, as well. Good work, there.

As far as action movies go, however, The Warriors features relatively standard stuff. No particular action scene stands out to me as being exceptional, and the overall tone and flow of the movie seem just as everyday. However, none of it can be said to be subpar — movies like Escape from New York (which I quite like) feature a similar level of value when it comes to action scenes, although with less realism to them. It’s just that what’s shown on screen in The Warriors is not far above-average. And that — I posit — is a good thing. The Warriors has a sense of being influenced by the Westerns of years prior, and more so the chanbara movies that some of the more-popular Westerns took notes from, emphasising stand-offs and tension over unarmed (or armed) combat. As a result, while The Warriors is certainly an action movie, it’s more correct to term it a “chase” movie.

To talk about some facts to do with the movie: The movie featured real-life gang members (seen most prominently as extras during Cyrus’ speech at the beginning) and had on-set “gang advisors” to oversee the production. There are also hints that the movie was at one point thought of with an “all black” cast in mind. There are reports of troubles between director Walter Hill and actor Thomas G. Waites in regards to one glass of alcohol and the quality of living afforded by the studio during the shoot, which led not only to his character being unceremoniously killed halfway through the movie, but to him going uncredited for the role (and remaining so, as of this writing). His character was originally supposed to live until the end, and “get the girl”, but the issues between him and the director, as well as the director’s realising the chemistry between Van Valkenburgh and Beck, led to the final story that we see in the movie.

There were some issues during filming, and many incidents following the release of The Warriors. Hill puts it down to the obvious fact that gang members were enthusiastic about the movie and ended up visiting the same theatres as rival gang members. I’d say that’s a fair assessment of what most of the incidents revolved around; and ultimately, those incidents only remain as footnotes to the larger story surrounding the movie. 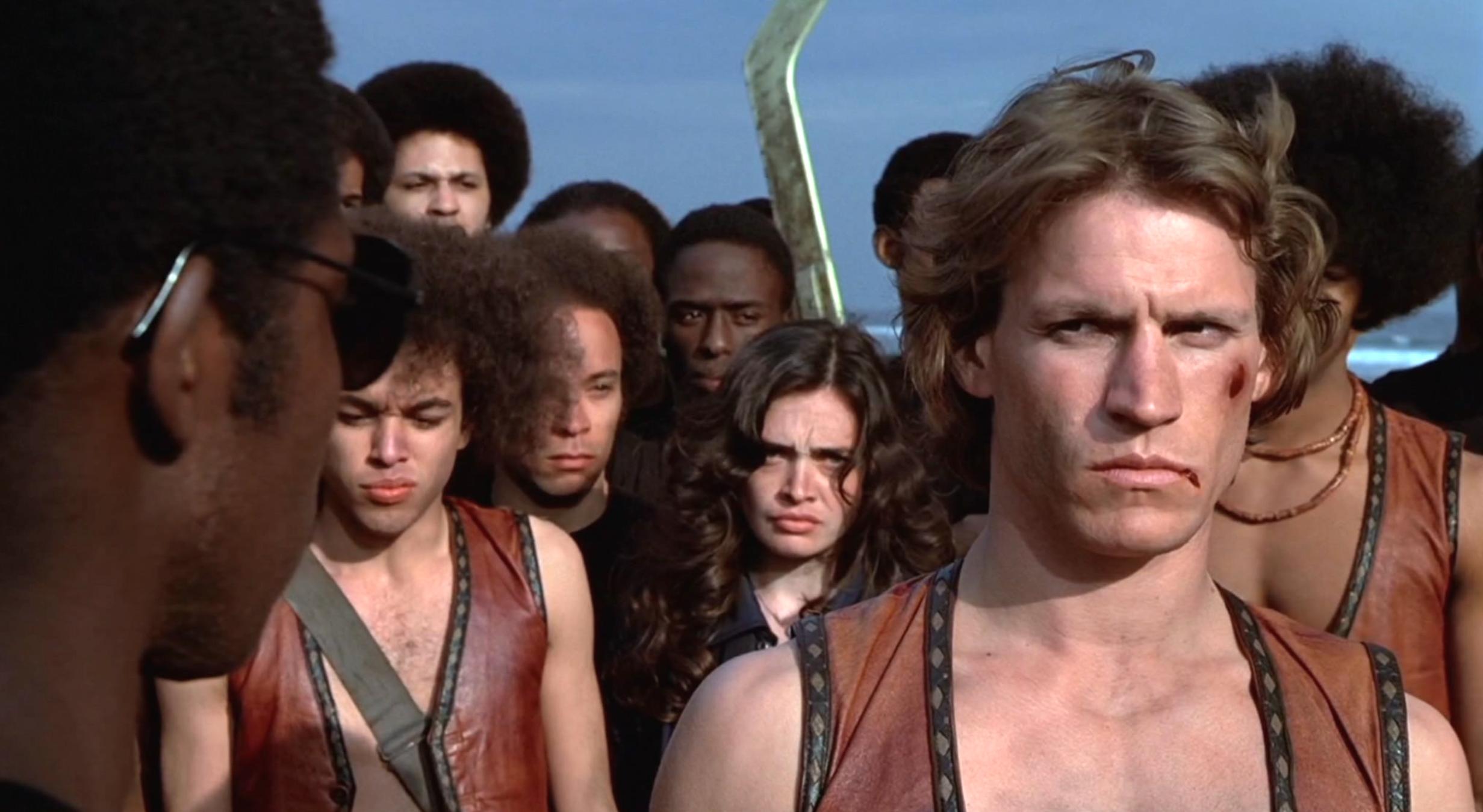 To break away from these facts and to return to my own opinions: I stated earlier that I’d expand on a point to do with the comic-book style that the movie’s aiming for. The one small gripe I have with it is the fact that it loses its charm, and begins to show cracks the more its used, with some scenes standing out as sore thumbs in the movie’s otherwise tight sense of visual style (and the more I see those lines rendered in Comic Sans, the more they stand out to me). It’s not a major issue, but a little restraint would’ve gone a far way in this respect. Of course, given that the movie was released in 1979, I can afford the movie some leeway, since I don’t think that any movie preceding The Warriors had aimed for this specific kind of look.

There is also a “human story” to be found in the movie. While it’d be easy to write off The Warriors as a schlocky action movie, there are some moments in it that plainly show that the team behind the movie hadn’t abandoned reality. It almost all comes crashing through in one scene set during the final leg of the Warriors’ train journey home. It’s to do with two couples who sit across from our protagonists (who have by now been shaved down significantly). I shan’t spoil it, but it is quite the brilliant moment in an otherwise high-tension chase movie.

Overall, The Warriors is a solid piece of work. It’s a shame that the movie came under fire during its release, and that it underperformed in critics’ eyes, but its status as a “cult film” is well-deserved solely on the merit that it’s a good movie. It’s hitting nothing out of the park, but it’s certainly edging the boundaries. I must commend actor David Patrick Kelly for his role as Luther, the leader of the rogues. He — along with James Remar — turn in excellent performances, and the rest of the cast handles their job admirably.

Now, the question: does The Warriors come recommended from both of us at The Corvid Review?
Can we dig it? 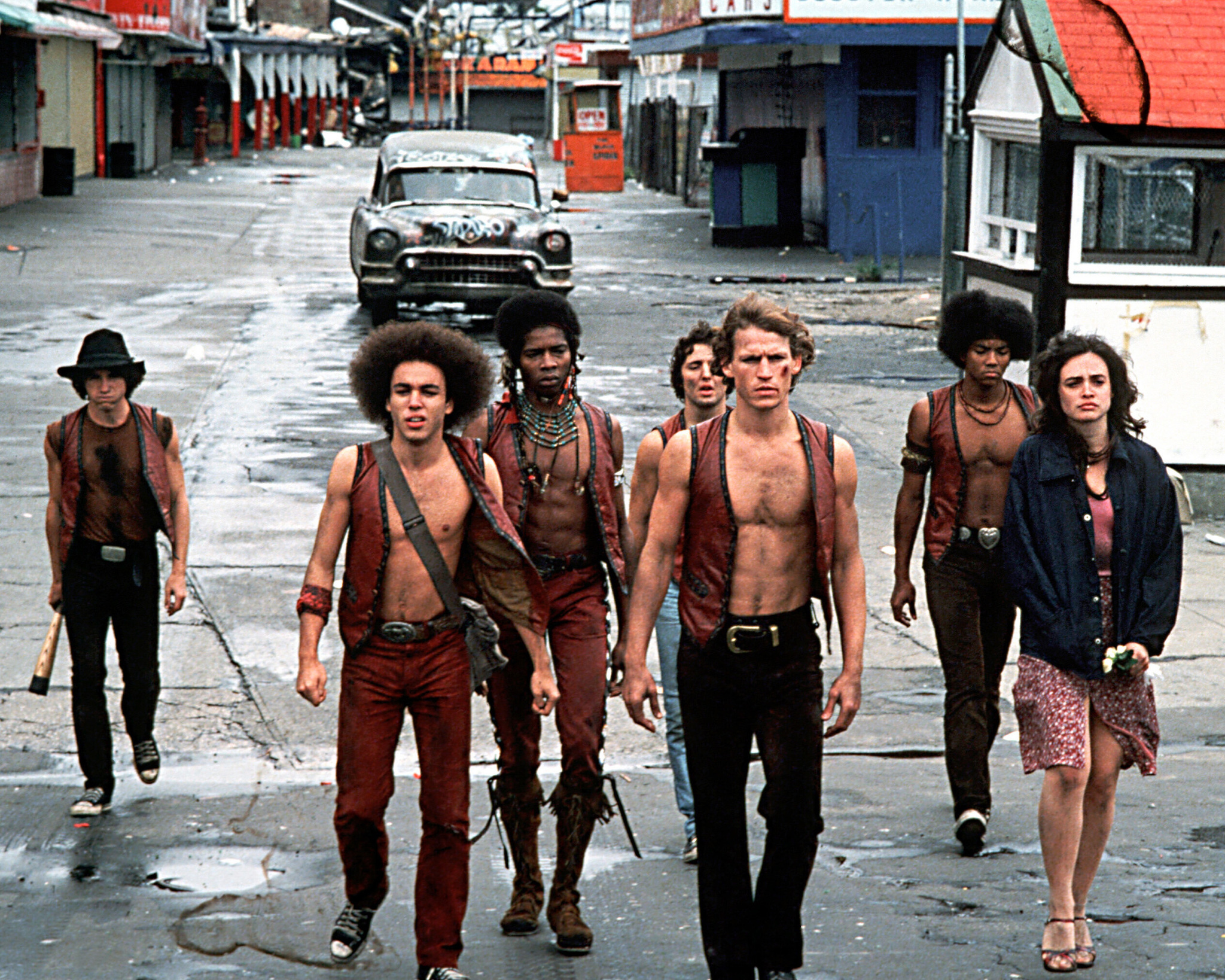 Just before we go, here’s a little secret for those of you who’ve come this far.

And also, before I forget, we now have a Flipboard account: 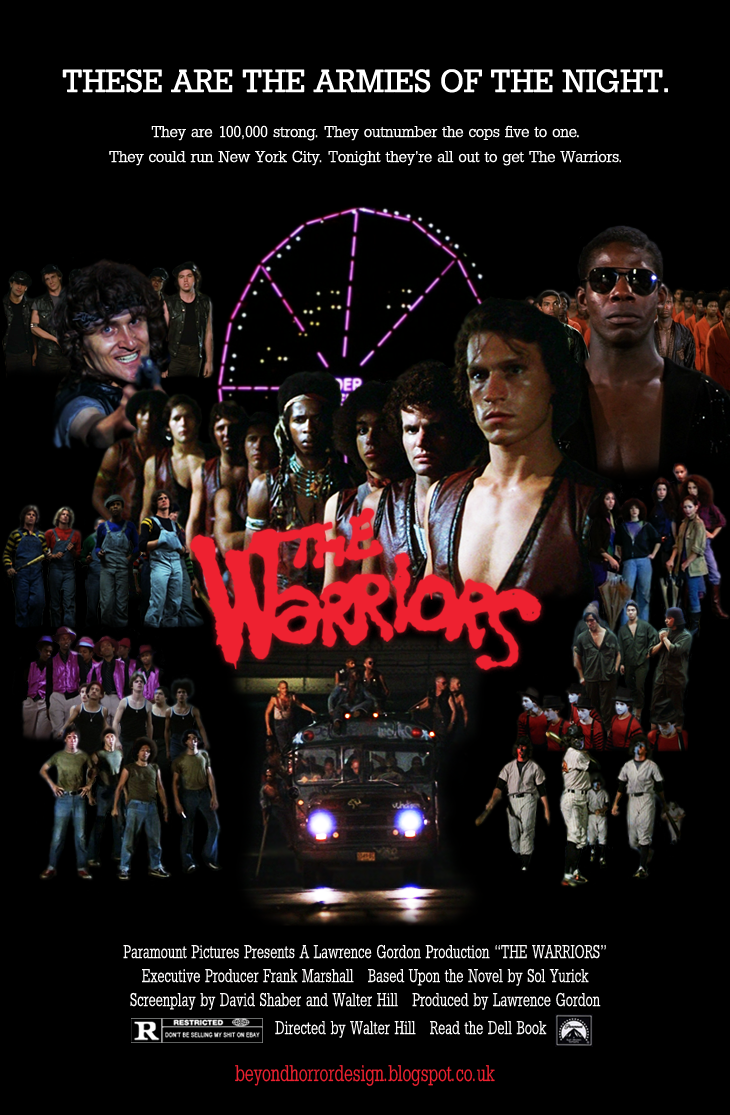