Note: This was originally supposed to be the Crow’s review, but the little birb hasn’t slept in like two weeks. So I knocked him out so that he can bore you some other time… (He also knows some of the folks who made this one, and that’s NOT FAIR.)
jk I just wanted to be VIOLENT

I know. I know… dopey’s jus not a festive bird. BUT IT’S ALRIGHT! Mummy-Magpie’s here to make everything all better again! Hope you lot got lotsa presents and stuffed yourselves all nice n’ pudgy with goose n’ turkey n’ hams n’ sprouts n’ cake!
And I don’t want to find any of ya sober out there y’hear? It’s SLOSHED–SEASON!

And now back to films…

BUT! Guess what? Bladdered or not… I got a helluva lotta reviews to get done. We just got done spending a few hours on the Fruminous Bandersnatch and the Crow‘s been put to sleep (like a weeetle baby!). So here I am stealin one of dopey‘s to get my own pretty little neck out front.

And hoo boy! This one done shimmered me timbers alright… I watched this one when it came out and I’ve been holding onto a lot of smarts ever since! This film made my brain grow I think.

So let’s all jump right in and start wrapping the last few of this year’s films up into neat little prezzies yeah?

WARNING: This section contains MODERATE/MAJOR spoilers
(depends on how you look at it I guess)

So… there’s this girl Lena (Nat Portman) who’s in one of those box rooms with a one-way mirror on the one wall. She’s being criss-cross-quizzed and it turns out she’s been away to this place called “The Shimmer“ and she’s the only one who made it out in the one piece.

But why was she there? It’s so dangerous and all.

See… her hub-bub Kane (Oscar Isaac… who’s in like EVERYTHING these days) had gone ghosting on her for bout a year. And then one day he’s like “Hai! I’m home!” and somehow she didn’t just go and stab him in the soft bits right there. So… he’s back and acting all Roboto on her and then he goes and gets sick (yeeesh. Dudes. What can a Magpie say? They’re always making a mess…).

So she’s like “I got this!” She gets him an amb-UBER. Then one thing leads to another and before y’know it… BAM! she’s stuck in The Shimmer!

(Okay… that’s kinda the worst way to explain how she got there. I was trying to keep spoilers out. So… let me try that again)! So she’s like “I got this!” And she goes and gets him an ambulancepolis. But on the way to the hospital, they get stopped and picked up!

And we get to know what TF’s been going on. See? Kane was in The Shimmer for that one year he was gone ghosted. Whatever happened to him in there is why he’s gotten sick. And if they don’t figure out what’s going on in there, things ain’t looking too good for old hub-bub. 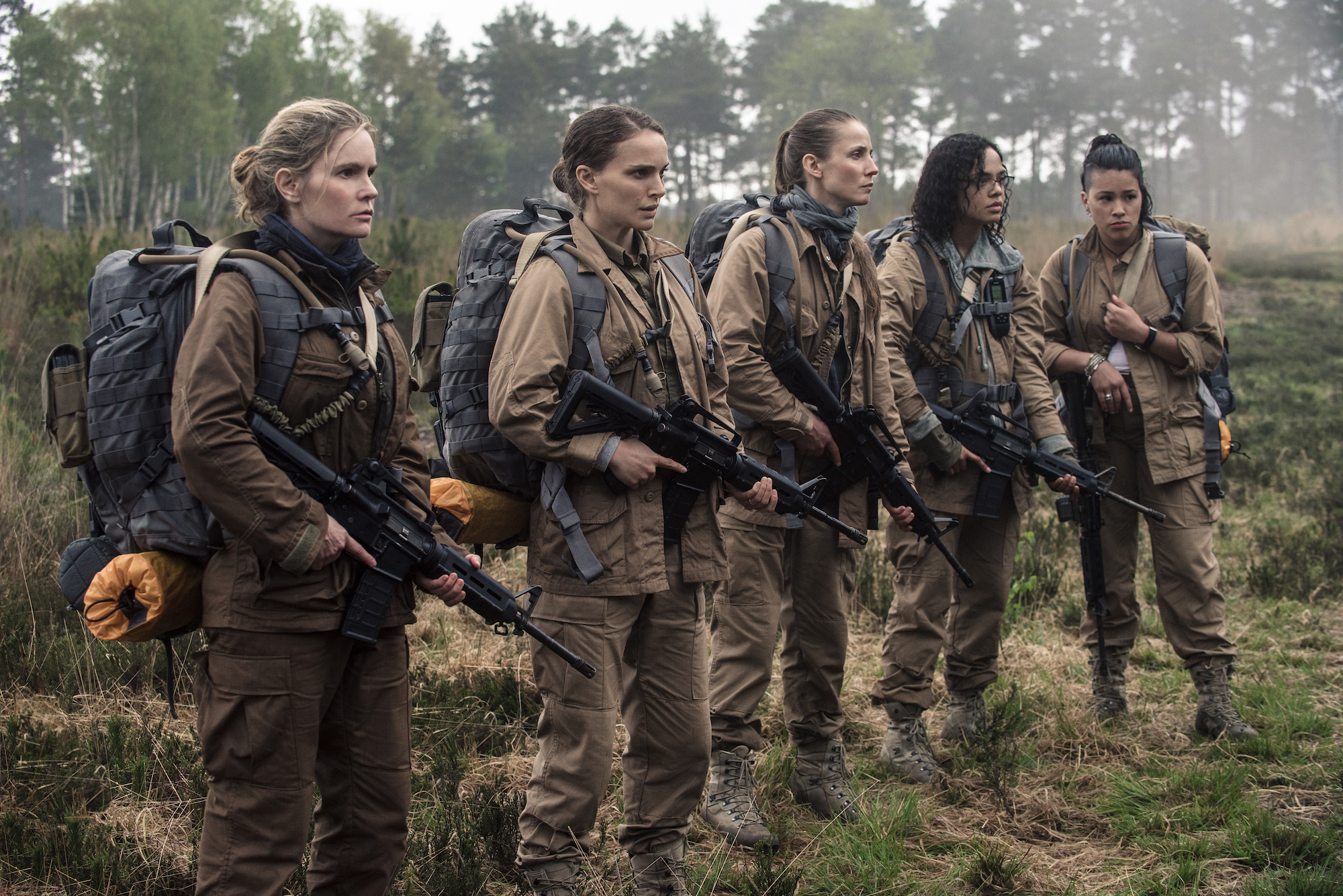 Now wait. Y’see… Lena is a Biologist who researched the “genetically reprogrammed life-cycle of the cell” (does that have anything to do with mitoch̕ron̷ḑria? I hear those are like the powerhouse of the cell. I failed everything else in Bio). AND THAT’S NOT ALL. She’s an ex-soldier who spent seven years kicking names and takin ass before putting her gun away and giving up the hero life!

(◔ ◡ ◔✿) my leady!
whoa there… what TF just happened to my eyes?!

So aaanyway… Lena hears about this team that’s been set up to go poke around in The Shi̶mmer and see what’s going on in there. And she straight-up volunteers to join up. She guesses she owes Kane a solid cause she ain’t actually been all that nice to him when he’s away and all. That’s why she goes.

And what’s this The Shimmer business anyway? A: It’s this place where the rules of nature act all different cause some unknown alien (or something) tech’s making magicks happen.
So she goes in to figure out what happened to her hub-bub. Things get weird. And THAT’S YOUR STORY!

Alright. So… does like EVERYONE write this story at some point or what?
Heck. Even the Crow’s got like a few hundred pages of writing about a “Shimmer” kinda thingamaplace… (It’s pretty trippy. He calls it his “Picni̶c love-letter” and idk why he gave it such a dumb name). You also had Stalker from way back when, which I guess was the OG for stories like this one. You had that Metro 2033 game. You had that book with the cats (NOVA SWING! Thaaas the one!). You had the blue dot empire the alien whatever made on Eros from The Expanse. This is the kinda story that’s ALL OVER science fiction.

But even though there are SO MANY stories like it… it still feels kinda fresh every time it shows up. Maybe it’s because of how every writer’s got a different take on it. Sometimes they’re Bracewell Probes (whaaat? You didn’t think I’d know about those little ideas?!), sometime’s they’re fun with “comms”, and this one’s about Biology (I mean… I already said Lena was a Biologist…) 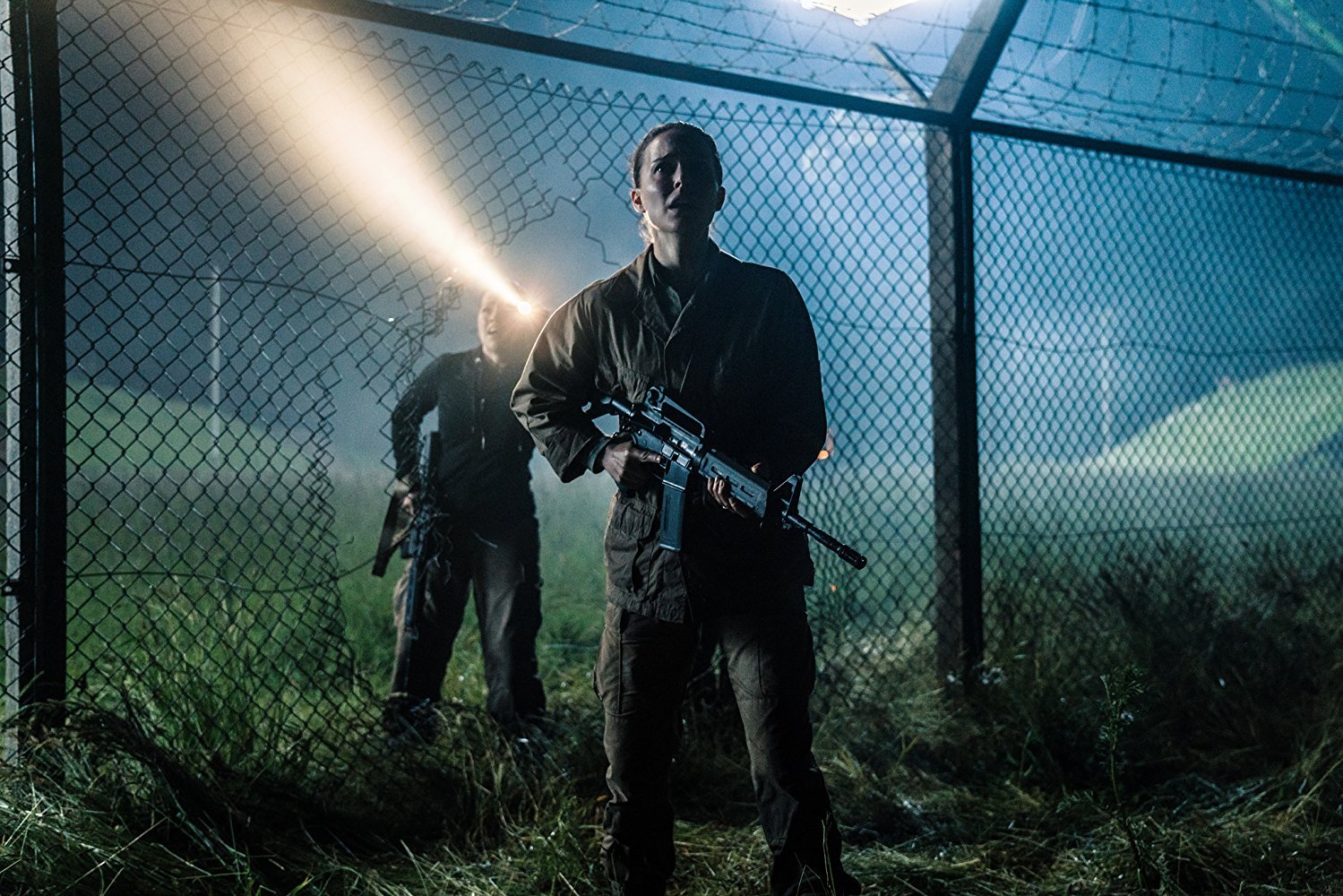 And I liked the way they used THE “ZONE” in this one. It takes a while for the girls to figure out what’s going on and everything, but when they “get” what The Shimmer is and what it’s doing… it’s pretty sweet.

Here’s the thing. A lot of folk seem to not “get” Annihilat̕i͘on. And I don’t get that. The film’s pretty straight-up about what it’s talking about. Maybe it’s just people are missing out on the quieter bits and bobs of dialogue. But there’s noth̡i̡n̡g in the film that doesn’t have at least a little clue pointing out what’s going on. Most of the things are explained, and the other things can be guessed when you go around picking up all the pieces and put them all back together like you’re doing better than the horses and blokes who took a look at Humpty-Dumpty up on a wall.

What The Shimmer does gets exp̶l̸a̛ined pretty plain and simple by Josie (Tessa Thompson). But just in case you need a little more help… here’s a word that’ll do you: RE̢MIX. That’s what’s going on here. I mean “refr̷action” and “fract̸a҉l” and all those words are silky like Galaxy. But remix is a better word if you want to “get” what’s going on. Things are getting blended up is what’s going on.

And a LOT of folk been talking about the suppo͡rting… critters in this one. And I liked ’em. But I had a teeny problem with one of them. (Okay. TWO of them. I’ll get to the other one in a mo).

I like bears. They’re all cute and cuddlesome. But Cass̶ie̡ ̷Boo Boo nearly made me wee wee my own damn self… And I felt SO BAD for Cass̶ie̡ ̷Boo ̷Boo too! All she wanted was some help. But NOOO! Our hoomins have to go and start SHOOTING at her for jus sniffing around and doing something-something bear things.

But F me if she wasn’t the scariest d͟amn thing I saw in a looong [butt] time!

But there’s the thing. I liked everything about Cass̶ie̡ ̷Boo Boo̕, but for some reason I didn’t really “buy” her on screen. The design was cool. The idea was cool. And the sounds… the sounds she made were a BIG NO͕̥͠-̸̘͇̞̦̯N̡̝͈̲̲O. But she just felt a little… fake for some reason. The scene’s real nice though. I wanted a little more of it and I wanted Cass̶ie̡ ̷Boo Boo̕ to feel a little more… there. (I still feel bad for her b͘ig̶ f͢u̵ŕrỳ b͜utt ̵t͠oo)̕!̕

The S͝E̵CǪͭ͑̇̔ͯ̿̚ND critter I had a problem with is the one I’m going to call the Sh̨imme̢r̀ Pet͞r̕oļ M̸an̴néquin͠. (And just WHAT is going on with my text?!) When it first showed up. I did̸n’̡t really know how I felt about it. But the more tim̛e̵ I śpent with it. The more I got used to the thing. The whole sequence with the Sh̨imme̢r̀ Pet͞r̕oļ M̸an̴néquin͠ in it was rad, but even I don’t get what it wants or wh̵at ̀it̴’s r͡ea͝lly doing. I mean… I can guess, but the film doesn’t give you a 1̺̩̹̘̲̱̩0̝̙̺̬̘̘0̹̙̳̪̭̤̻%̮̣̭̼ on it.

Now before I get to the end҉ing…

The Shimmering Magpie: The final ratings are down below.