(This better be good…)

And that made me a sad Magpie. (See: 😦 ) I mean… WHY did we have to listen to all that talking and go through all that crap about essays and philosophising like a kid in first-year ethics class and BORING religious folk aaand… AAARGH!

HOLY MAGPIES was that whole thing boring! And then they went and blowed Godzilla up and it made me more sadder because my king got killed and then the hoomins were all happy that they won and I was most saddest because my king was all blowed to bits and…

SO this time… We KNOW Uncle Big G IN DA HOUSE! And you bet’cho sweet cheeks he ain’t happy. Oh no no no. He’s had enough of these pesky humans and their “more jpeg” friends (lololol) and these salad-people coming back to annoy him in his OWN HOUSE. The Earth’s HIS little playground, and he ain’t letting NO ONE wreck his peace of mind. He made them bug off before, and he’s gonna make them bug off again.

And this time, you bet it’s going to be for good. So…

TIME TO GET THAT SWEET, SWEET ATOMIC BREATH VENGEANCE GOING!

So the hoomins are running scared (like they SHOULD). Uncle Big G’s just kinda…well… he jus’ done woke up, so I guess he needs some tea or something (or vodka!).

It happens in the…

City on the Edge of… MechaGodzilla…? 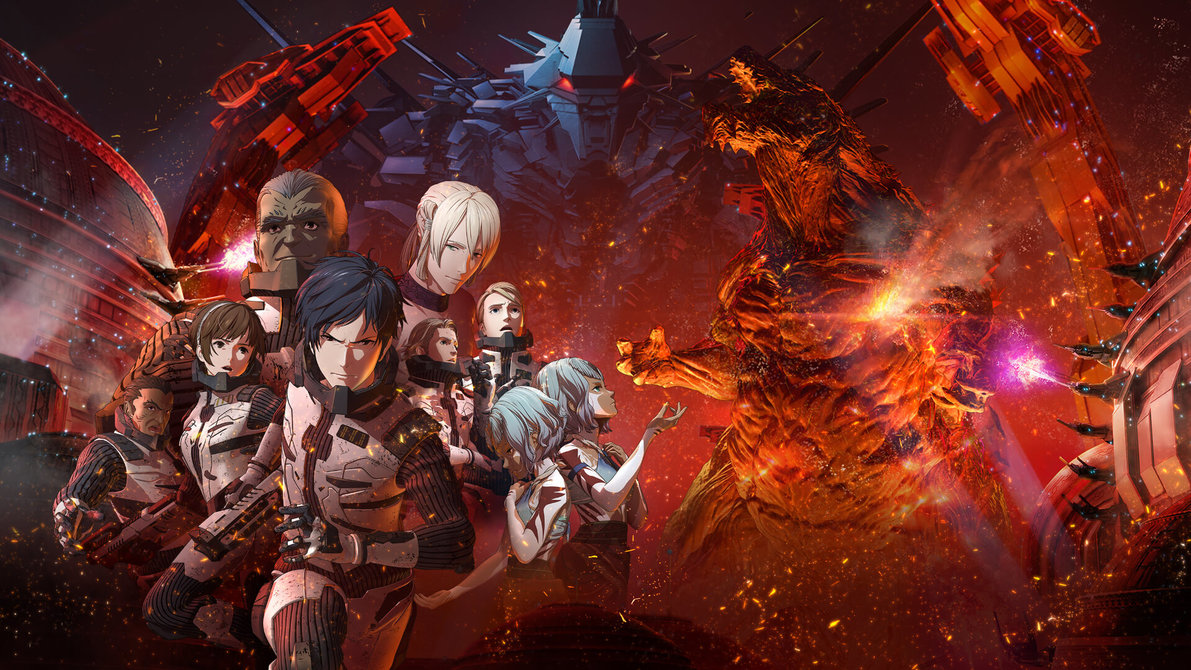 THE HOOMINS, THE JPEGS, THE ROBOTS,

So… what happens after the hoominoids get the stuffing kicked out of them by angry-papi-Goji?!

Well, the peeps on the Aratrum (the spaceship everyone’s been jetting around on) calculate that the REAL Gojira can nuke-breath them all the way out in orbit because he’s so BIG and POWERFUL.

It looks sorta… bad. Doesn’t it? It’s all these blue dotty things running all over the place like sick from a night out with lots of WKD to chase all that vodka down with (not that I’d know or anything… (◔__◔✿)…)

I mean, okay, maybe not on the snap (Netflix really needs to make this more painless), but when everything’s all moving about all gooey and shit… yeah, it looks pre-tty crap.

We’ll just have to wait and find out, WON’T WE?!

So anyway… with the clock ticking down, Sasaki (read me backwards) Haruo wakes up from getting knocked the F out by Uncle Goji a-waggin’ his tail after that long-ass nap, and he’s covered in… sparkles? (I mean… WOT?)

And he’s in a hut. Like a thatch-hut. He thinks he’s ded for like a minute and then decides he ain’t. He spooks some tiny girl and runs out to discover… the HOUTUA tribe!

(Say that ten times in under ten seconds and see how silly you sound! do it! do iiit!)

Some fighty-fighty happens first though, and Haruo finds some of his old mates out in the forest while he’s out prancing with the tiny girl who’s been taking care of him during his little kip (and who totally doesn’t have the hots for him or anything. I mean… the guy’s about as interesting as a wet plastic sheet, but I guess whatever gets her gears going gets her going…)

Long story short: these Houtua (Magpies… that sounds stupid) are part-hoomin, part-moth people who worship a certain big adorable Moth who His Nuclear Scaliness done twatted a long, long, long time ago. The sparkles are obv connected to Her Fuzzy Buzziness’s powers and they’ve been surviving underground where they’re somehow not just squished under the King’s bulk.

It turns out that the tiny girl who’s two sides of tsundere at the same time (sometimes frowny, sometimes all ga-ga) is actually TWO tiny grills! And these “moth-people” worship an egg which tells them sheet. And these two twinny twins are in TELEPATHICS with it! And they and their three Old Wise Men tell the “Passing CROWS” to “Lend… [their] ears to the baby… Chick (?!)”… and apparently that’s a question???

They ask them why they’re here and they say they’re here to fight the King and yadda yadda and the Houtua let them go. Fin. But not before they ask the PASSING CROWS if they’re WINGS OF DEATH (I know one that is! I know one that is! GIT ‘IM!)!!! But nah… they think the crows are fine (they’re cool, but sometimes…) and they let them go and all. (I wanted a fight… (◕︿◕✿)… )

So anyway… the “Crows” and the twins team up and head out to look for the landing ship. Aaand… they get jumped. Some tentacle-pawn starts up, and then the scraggly tin birds show up, aaand… METPHIES SAVES THE DAY! He made it! He made it! (The creepy evil FUCK! Mark my words!)

More talking happens and… YAAAWN. It’s been like half an hour already. Whatever, let’s make this quicker. The Barley Salad MCs (who’re actually important this time) Belu-Be and Galu-Gu figure out that the Houtua are using “NANOMETAL“and that their old toy-bot MechaGodzilla might still be kicking about someplace. AND HERE.WE.GO! It’s time to get to what’s on the poster! It’s time to set up the KING VS…

Wait. Where the fuck is MechaGodzilla?! Okay, so it looks like the Big G’s patrolling it. The Barley Salads are looking for it. And the hoomins and the moth-girls are tagging along and getting into trouble on the way (because they’re idiots).

Wait! They saw something up ahead!

And YES. That’s ALL we get.

That’s it. I give up. Fuck these anime Goji films. I’m not even going to bother…

NO. MechaGodzilla doesn’t just transform into its final form and throw down with the Big G. It just kinda… sits and buzzes while everything goes to shit all around it. And there’s all this shit with nanometal and people getting (I dunno) assimilated by it or some shit like that. And there’s these mechas and they do the SAME thing they did the FIRST time all over again and it’s just…

WHAT THE FUCK WERE THESE PEOPLE SMOKING?! OR SNORTING?! OR WHATEVER-ING?! WHO thought ANY of this was what ANYONE wanted?!

And it takes (I swear…) an HOUR AND SEVEN MINUTES for His Nuclear Scaliness to ACTUALLY SHOW UP! And then we go back to MORE talking!

I actually liked the whole “becoming something more” bits, and I kinda like the whole nanometal thing, even though it’s getting a little old to have grey goo takeover-land as the ending for EVERY story with nanomusheens in it. But it just goes on FOREVER and everyone keeps disagreeing with things they said just a few minutes ago ALL the TIME. The Barley Salad names don’t help neither.

Now, the bad: all of everything else. It’s way too long and delivers way too little. This isn’t a Goji flick. This is a wannabe scifi film dressed up with the Big G’s name to put asses in seats for a few quick bucks. The heads that made this oughta be ashamed of themselves. I’m getting off this train here at this stop.

Nope. Nuh-uh. You’re not getting me to waste my time on all this talking and none of His Nuclear Scaliness. I want to watch a Gojira film because OF Gojira, not this crap. Fuck this whole series already, I’m…