Note: This post was written in the October of 2017, but has been postponed up until now since we are nothing if not fashionably late (among other reasons). The post is presented as it would originally have appeared, with some minor updates.

Since we’re currently in “Horror Month” (which, in retrospect, is the first of many traditions we hope to establish as we continue our mission), we’ve been hunting down horror movies across the ages. The Azure-Winged Magpie’s been in touch with our friends at /r/horrorreviewed and has formed a sizeable list of features for us to go through.

With her finally done (for the moment) with her Z-grade movie marathon and back to more traditional posts, she came across a happy coincidence on the subreddit.

As part of their “Weekly Watch“, the people in charge of /r/horrorreviewed have listed out a good number of movies. And the movie on the list for this week? Why, it’s one of the movies listed in my Top 10 Horror Movies of All Time post from last year.

[The review follows this section]

My mum is — and always has been — a massive fan of horror in all its forms.

I first watched The Thing — according to her — before I’d even learnt to speak, but of course I have no memory of that. My first memory of watching it comes from when I was about ten years old. Over the years, I’ve rewatched it many a time and have the movie essentially memorised. So it’s quite a surprise that I’ve never written about it.

Thus: here we are.

The Thing is not the first of its kind. It is, rather, the closer of the two adaptations of the legendary John W. Campbell’s 1938 novella Who Goes There? (published under the pen-name Don A. Stuart). However, we’re neither looking at the original story in this post, nor the 1951 adaptation (The Thing From Another World), but solely at the 1982 version as an isolated production. Since I haven’t watched the 2011 prequel to the movie, either (but have heard some less-than-flattering things about it), I’ll ignore that instalment as well.

I’ve watched a number of movies by John Carpenter, but The Thing is the one that first comes to mind when I think of the man — followed closely by Escape From New York (which shouldn’t be a surprise to those of you who are more familiar with my tastes).

And what do I have to say? Well, let me tell you:

Plot: The movie sets up the antagonist (like most good fiction does) with a short scene featuring a UFO — a very classic saucer-shaped thing — entering the Earth’s atmosphere. Personally, I would have left it out.

We are thereafter in Antarctica, following a dog as it evades fire from a helicopter manned by researchers from a Norwegian research camp. The dog runs to the safety of our protagonists: the people manning the nearby American research station. A brief firefight breaks out, and the Norwegians are killed.

Following this strange incident, the stray canine is taken in by dog-lover Clark (Richard Masur) and gains roommates in the form of the Americans’ own dogs. And in response to the events so far, two of the American station crew — Dr Copper (Richard Dysart) and our de facto protagonist MacReady (Kurt Russell) — decide to head to the Norwegian camp for answers.

There, the two men immediately find a scene of chaos: the remnants of a violent mass-death-by-fire (for the most part). They recover a few tapes and one very strange corpse in particular. They decide to return to the safety of their own camp to better deduce what actually happened at the Norwegian station.

There, the strange quasi-humanoid corpse is revealed to have a ‘normal’ set of internal organs during an autopsy by the surgeon (I assume) at the camp: Dr Blair (A. Wilford Brimley). The tapes reveal that the Norwegians had discovered something ancient buried beneath the ice: a vessel, of sorts. And while the Americans ponder over the mystery in front of them, something far darker and immediate is happening in the kennels, setting the station’s dogs on edge. 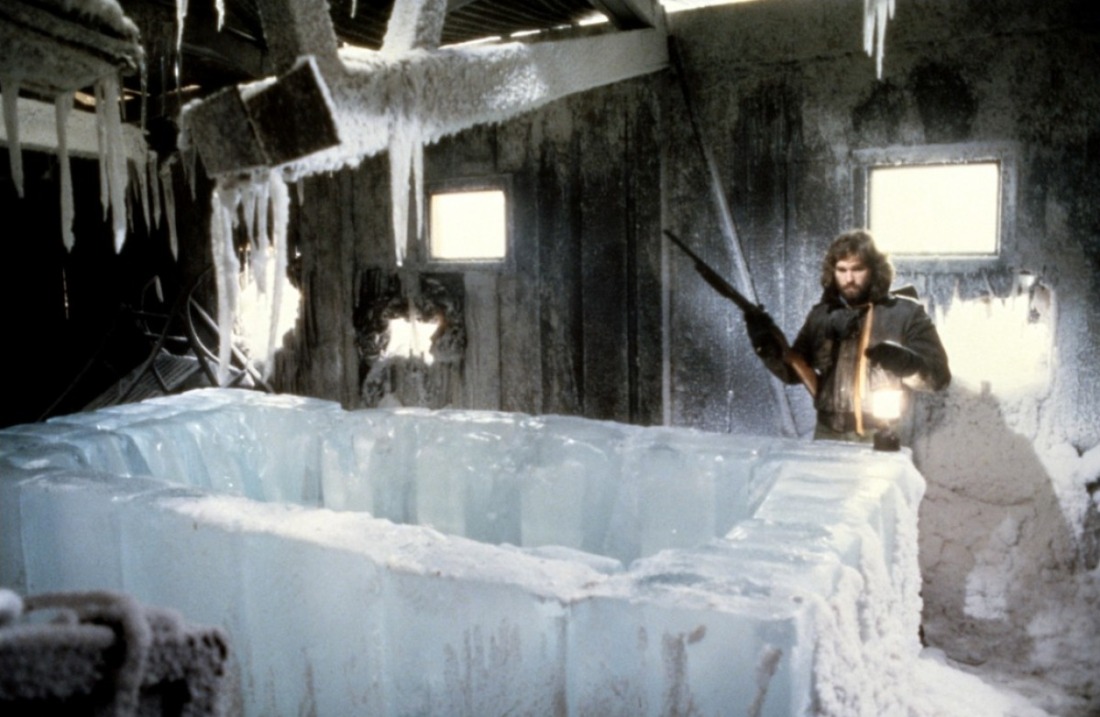 The Thing thereafter goes into full-tilt horror-mode, but while one can switch off and watch it as any other “Monster of the Week” feature, there is far more happening beneath the surface. Sure, gore and strange perversions of biological material are splattered across the screen with alarming regularity, but there are deeper fears embedded into the movie: paranoia, distrust, and the human drive for self-preservation are all on display in all their gritty detail.

The (possibly titular) ‘invader’ of the movie is — for all we know — simply a creature fighting for survival after being woken from its millenia-long slumber. But Blair throws a spanner into the works early into the movie by revealing the potential the creature has to essentially ‘take over’ all life on Earth.

In the end, of course, we understand that the creature never had any such intentions, but it matters not one fractional bit to our human characters. And the reaction that the station crew (our heroes) have to the appearance of the creature is — ultimately — only human. Which of you — I ask — would act differently? None of us, I wager (even though I’m a crow).

I posit that the creature — while certainly a menace to our main characters — is interested only in getting home. The station crew are simply obstacles in its path, and I doubt most people would disagree with that statement. And in response to its bid for survival, the station crew responds with a frantic, desperate survival attempt of their own.

The miscommunication leads to a bloody, messy affair that culminates in a showdown between the survivors of the research station and the closest approximation we are given of the creature’s true nature. And while this is the underlying plot that drives the movie, it isn’t anywhere near the reason that serves to make the movie a great example of storytelling.

To put it lightly, The Thing is not just a horror movie revolving around the idea of Man vs (a sort-of) Nature. It’s certainly a product of its time — the uncertainty surrounding the state of the Cold War, following incidents such as the Cuban Missile Crisis: a great treatise on paranoia. This is where the Man vs Man aspect comes in.

Not only does this type of conflict relate to the struggle of our protagonists against the nameless creature — which is a thinking, living being displaying desires relatable to us (the idea of going home after finding itself in a strange place), but it also relates to the conflict(s) that make up the bulk of the movie’s narrative: the conflicts that reveal themselves as the characters begin to suspect one another of having being assimilated by the creature.

And just to point one thing out before I continue: the scene featuring Bennings (Peter Maloney) in the snow sets up possibly the greatest horror movie “roar”, bar a particular scene featuring Donald Sutherland from Invasion of the Body Snatchers (1956).

The Thing pits protagonist vs protagonist as the terror of the creature from outer space hangs heavy over the plot. Just as there are copious amounts of blood, guts, and gore on display, there are equally-voluminous measures of deceit, pleading, and suspicion, here.

The movie doesn’t even care if we — the audience — knows who is human and who is not. We are left just as uncertain as the characters dealing with the struggle for survival in the isolated, cold, and unwelcoming environs of this lifeless place they have found themselves in — as the creature also has.

Together with the (eventual) realisation that the creature’s form of ‘mimicry’ is perfect not only down to the cellular level, but also on levels which are personal, a case could be made to argue that even the creature (and it’s… children?) might end up not knowing who is what any longer. 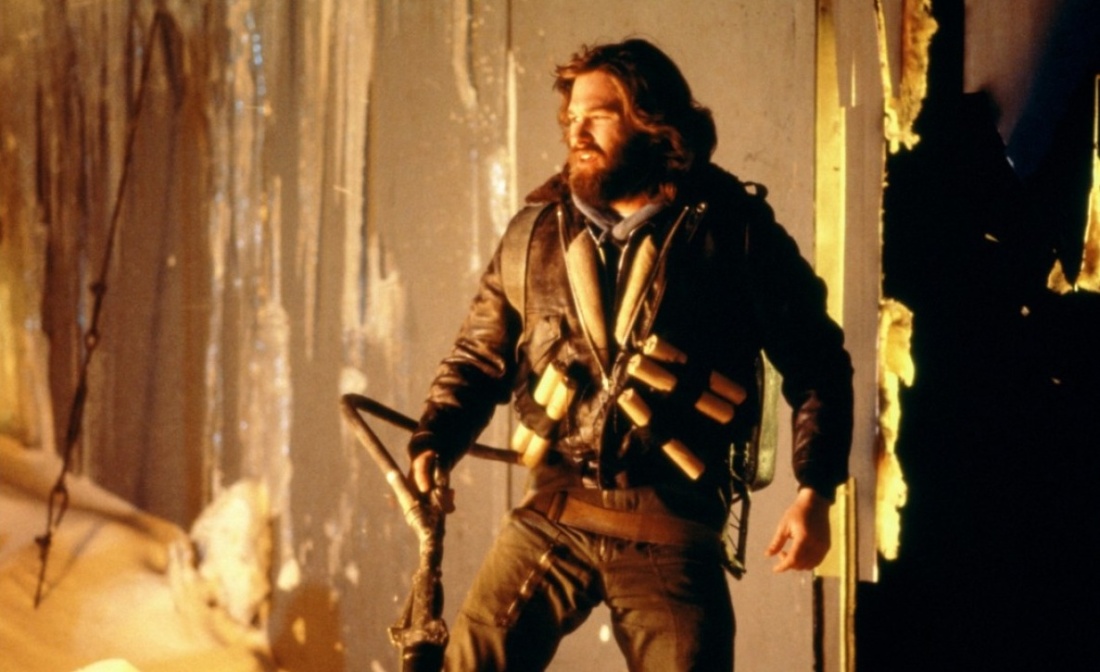 A scene from shortly before the end of the movie — featuring MacReady and Childs (Keith David) — sums it all up in one succinct moment: two men, unaware of what the true nature of the other might be, sharing a bottle of drink as the end looms upon them.

Many have argued — with evidence — that a definitive answer to “who is what” in that specific scene exists. I’ve heard many of them. And I ignore them all. As in the cases of movies like Inception and Primer, definitive answers are unnecessary. That’d be missing the point of the movie. There may very well be an answer to the question hidden in the movie for fun, but the point that the movie is making with the characters as we see them in that moment is that there just is no telling any longer. All that remains is the cold winter landscape of Antarctica, lit by fire.

The answers to who might be human, and who might have become a child of the “thing” are irrelevant in the face of how far the paranoia has come, and how the characters on either side of the conflict — the humans and the creature(s) are just… tired of all the fighting. One way or another, neither of them is really going “home” — at least not for the moment.

In this one moment, both parties — human and alien — are brought together over a sip of scotch. And that’s an idea I can get behind.

Considering how — prior to the rise of social media — the 80s can make a claim to being one of the most paranoid generations, The Thing cements itself as a significant movie from that generation. And I’ve always been somewhat suprised at the early reactions to the movie. I understand why it failed to do well on a financial front, but I don’t see where the sheer degree of vitriol that critics had for it came from. It’s one thing to dislike splatter effects, but it’s a wholly different thing to rip into an otherwise intriguing movie based simply on that basis (see my recent review of Saw for more thoughts on such things). 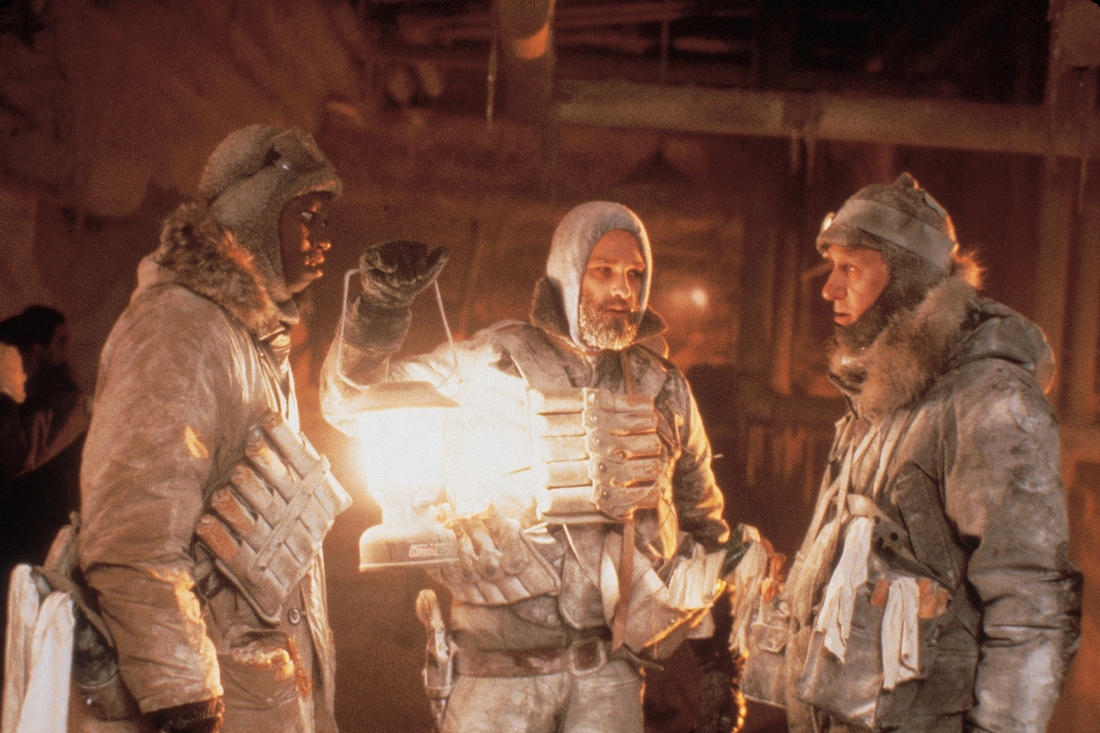 Personally, I find The Thing to be an intriguing movie that — apart from the gore and splatter elements on display — I’d be happy to recommend to just about anyone. And as far as my suprise about the initial reactions to the movie go, I guess I’d have to be living in the US at the time to understand why people disliked the movie so much.

Cutting the opening scene involving the UFO, and perhaps keeping some of the creature’s “effects” off-screen would’ve served to help this movie not age as it has. The practical effects hold up well, as does the concept of the creature, and the atmosphere that the movie has.

As technically solid as the movie is on both the visual and performative fronts, the score — by the legendary Ennio Morricone — is what ties everything together: both haunting, and imposing at the same time. It’s a good example of music-telling-the-viewer-what-to-feel done right (for once!), no matter how much into the background it seems to fade.

Overall: The Thing is a very good movie that certainly warrants a watch for those who love good cinema. And I highly recommend watching it to you (if you haven’t already). 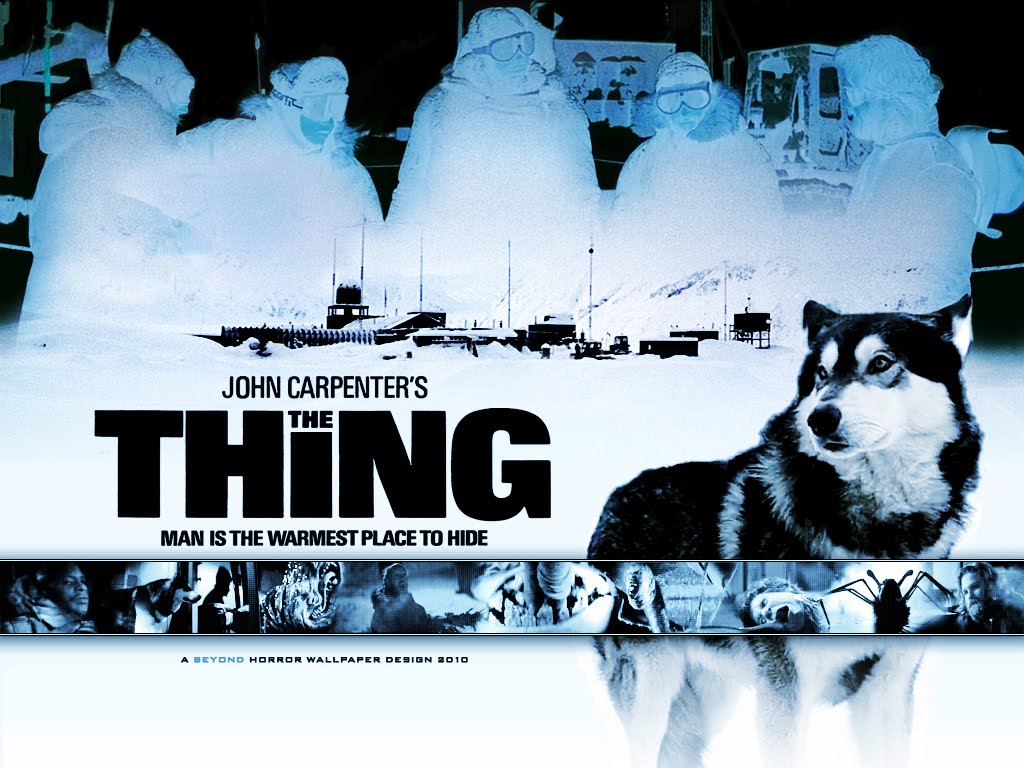