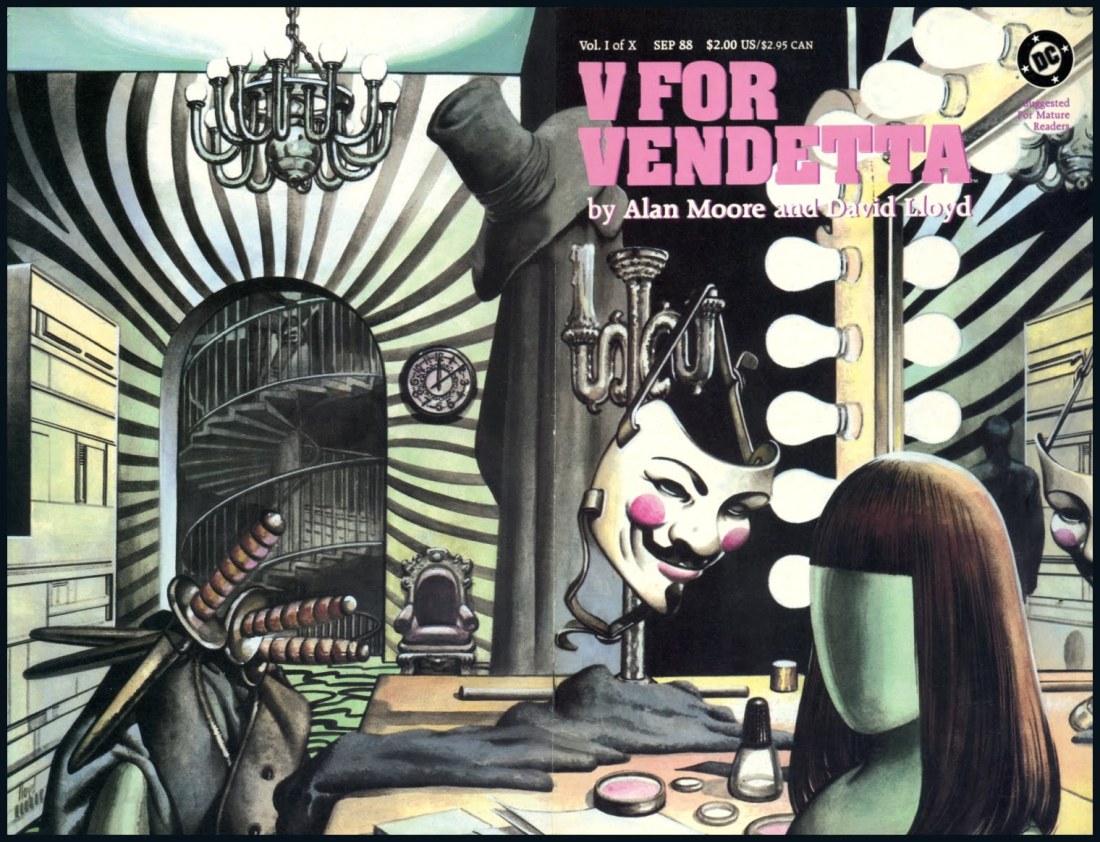 Remember, remember, the fifth of November. Actually…wait. It’s the twenty-third. Ah, well. Thought I’d make a return to write a review of one of my favourite films: V for Vendetta. And, since this is the appropriate season to write something like this, I thought, “Why the hell not?” Based on the 1988 graphic novel written by Alan Moore and David Lloyd, this movie was released around March 2006.

So, with that, let’s strap on our Guy Fawkes masks and begin!

DISCLAIMER: I only included some of the characters from the movie into this review, as I believed they were more important than others. 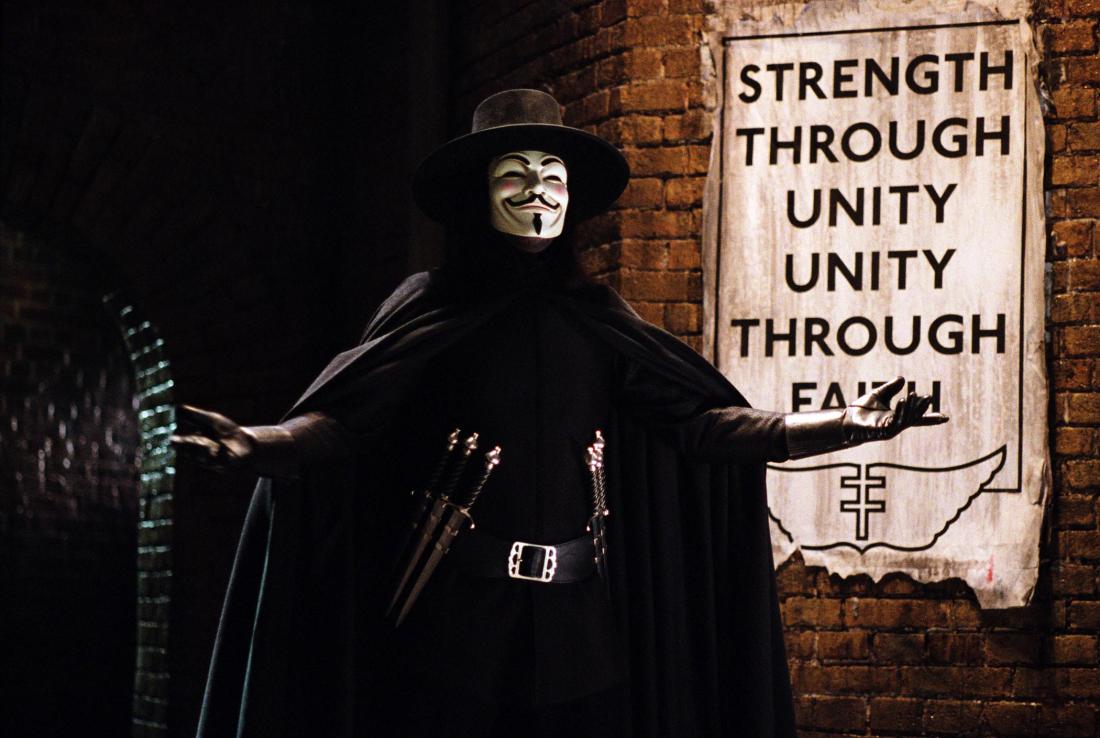 After a delightful flashback of Guy Fawkes being executed, the movie shifts to the year 2027. Britain is ruled by a totalitarian government called the Norsefire party, who take pleasure in imposing curfews and silencing anyone that either opposes their policies and/or people who aren’t white. (So, that’s me, the Crow, Magpie, and the Raven etc. sent to the gas chambers, then). Anyways, our heroine, Evey Hammond (Natalie Portman a.k.a. the mother of Luke Skywalker from Star Wars) has overstepped her curfew boundaries. She’s about to be raped by a couple of Fingermen working for the Norsefire party, when a mysterious masked man rushes in to save her.

After subduing the Fingermen, the mysterious man introduces himself as V (played rather well by Hugo Weaving) and takes Evey to be a witness in watching his musical demolition of the Houses of Parliament. Understandably, the Norsefire party are rather miffed about this and the head of the party, Chancellor Adam Sutler (played by the late John Hurt of 1984 fame) sends his minions to investigate the whole she-bang. These minions include Sutler’s right hand man, Peter Creedy (Tim-Piggott Smith) and a hard-working Inspector Eric Finch (Stephen Rea).

The next day, Evey’s problems get worse for her, as V invades her workplace and sends out a message to the people of Britain to revolt against the Norsefire party in exactly one year. V shows himself to be quite a formidable fighter, as he takes out certain Norsefire minions here and there. However, the fight scenes are slightly cheesy and I swear some of the blood gushing from the necks of the fallen must be some CGI shit. But, I digress.

Anywho, after being rescued from another minion, Evey ends up as a prisoner in V’s home. She’s pissed about this, but V reminds her that if he left her to her own devices, she’d be left to even worse fate at the hands of the Norsefire party. The relationship between V and Evey is quite endearing in its own weird way. They start off fairly amicable towards each other (despite Evey’s weariness and fear towards V), before the relationship becomes even more dangerous and sour. This is demonstrated by V’s murderous actions towards certain members of the Norsefire Party, including Norsefire’s very own Joseph Geobbels, Lewis Prothero (Roger Allam), Bishop Anthony Lilliman (John Standing) who likes to fiddle little girls and coroner Delia Surridge (Delia Cusack).

SPOILER ALERT: These people were responsible for V’s imprisonment and torture at a correctional facility called Larkhill.

Evey’s quite disturbed by V’s actions, so she seeks refuge at her boss’s house. This delightful, friendly fellow is Gordon Deitrich (Stephen Fry) who is a closeted homosexual. Things go quite well, until Gordon decides to make fun of the Norsefire government on his own television show. This leads to Gordon getting brutally captured and paves the way for Evey’s imprisonment and horrifying torture. Ultimately, the film highlights Evey’s struggle to overcome her past and to demonstrate her bravery, as well as conveying V’s vengeful determination to bring down the Norsefire government once and for all. 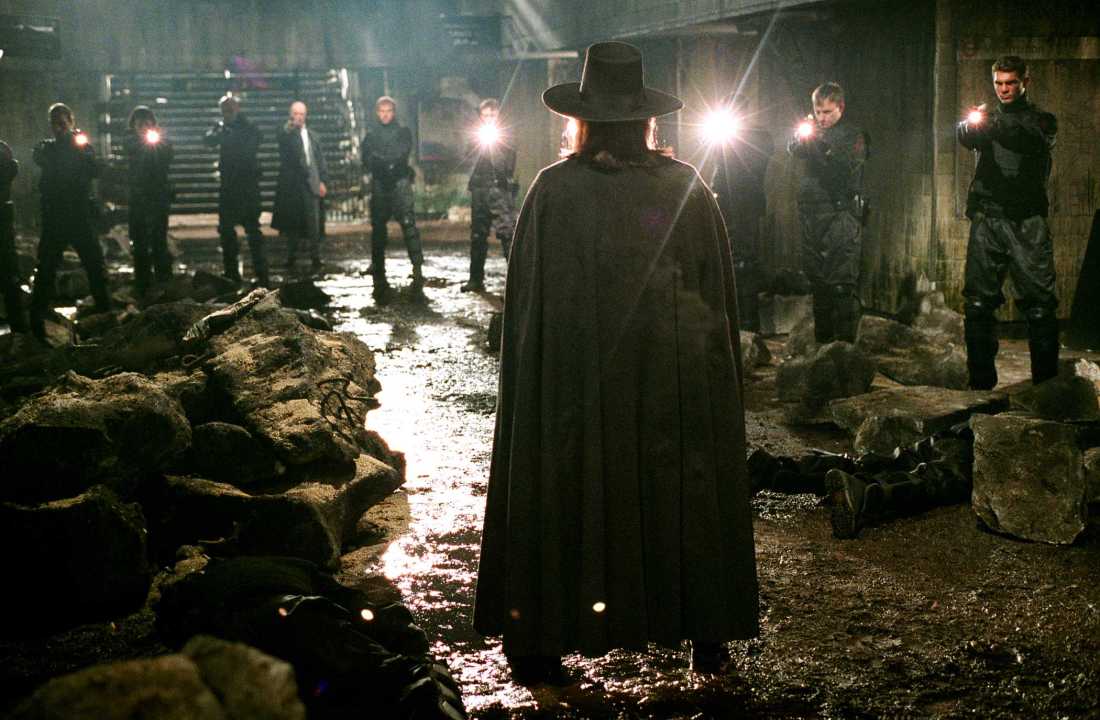 V (Hugo Weaving) 10/10: Hugo Weaving provides a commanding performance as V. He provides humour, charm and wit, as well as conveying him as a ruthless assassin. V’s past is quite mysterious and I like the fact that the filmmakers chose not to delve deep into it, thus displaying an air of mystery surrounding the character. V is more or less a man on a journey to seek his revenge against the people who wronged him. Despite the fact that he is a cultured badass, V is known to show a vulnerable side to his character. This is usually shown through some of the interactions between V and Evey, especially as the two start to fall for each other during the course of the movie

Evey Hammond (Natalie Portman) 9/10: Portman does a fine job portraying Evey and she’s rather good at using the English accent (it gets a bit awkward during some scenes, however). Evey is shown as a frightened young woman, trying to keep her head down from the Norsefire government to being a brave, strong willed character as a result of her traumatic experiences. Portman’s acting skills are being put to good use in this movie and it’s particularly shown during a rather tense confrontation between her character and V in the middle of the film.

Gordon Deitrich (Stephen Fry) 10/10: Stephen Fry. Not just because he has the same name as me, but I just love this dude to bits. Last year, he did an interview where he talked about political correctness. Ahem, but I digress. Fry does a great job portraying Evey’s boss and friend, as well as providing humour/warmth to his character. Shame he gets whacked round the face for making fun of the Norsefire party. That scene made me feel rather uncomfortable.

Chancellor Adam Sutler (John Hurt) 9/10: John Hurt portrays Sutler as a terrifying, authoritative ‘Hitler-esque’ figure in the movie. Hurt provides the character with that sort of realism that is found in real life dictators. Sutler is a man so uncompromisingly militant and evil that you would like to see an end to him as soon as possible.

Peter Creedy (Tim Piggott-Smith) 9/10: Played by the guy who was Johnny English’s boss and who also appeared in Quantum of Solace (I’m a Bond fan, can’t help it). Creedy is another menacing figure in the movie and has that look that he will kill you, if you so much as sniff in the wrong direction. Tim Piggott Smith plays Creedy as a very cold blooded, intimidating figure and whenever he appears, the mood drops in this already paranoia filled movie.

Lewis Prothero (Roger Allam) 6/10: Meh, Prothero’s okay. He’s also in a few scenes and is seen during the Larkhill flashbacks. Apparently, this guy is supposed to be a piss-take of the American political news broadcasters and it shows through his hammy filled speeches, which include taking the piss out of the US of A. Yeah…sorry ‘bout that, ‘Murica.

Bishop Anthony Lilliman (John Standing) 5/10: Not much to say about Lilliman. Just a standard stereotype of a priest who fancies people he shouldn’t. His inevitable fate won’t bring a tear to anyone’s eyes.

Eric Finch (Stephen Rea) 9/10: Stephen Rea plays Finch as a man just trying to do his job. He starts off as an obedient inspector who’s determined to catch V. However, throughout his investigation, Finch discovers that the people he’s working for are not as honest as he thought. Rea does a good job playing the everyman – type character that a lot of people can relate to.

Delia Surridge (Delia Cusack) 7/10: Not much to say about this character. I suppose Surridge plays Cusack with a hint of sympathy, as she visibly regrets her actions at Larkhill. Shame V killed her, but that final scene between both characters is quite touching, as well as tragic.

Overall, V for Vendetta is a movie I really like and I’d happily stick the DVD in the TV every November to celebrate the ‘explosions day.’ Now, I’m not well-versed on the anarchistic side of things (that’s the Crow’s job), but I enjoyed the movie as well…. just a movie. That and the fact that it provides a bleak alternative to what Blighty could look like in the next few decades. One can only hope that such a scenario will not exist. Yeah, we really hope.