a preview by the Azure-Winged Magpie!

Now, we’s a couple-a Trekkies ’round here parts. But you know what I love too?! Ohhh yeahhh… dem stories from a long time ago in a galaxy far, far away.  . . . !
Okay… I’ll stop speaking like that now…

One of our ensigns is apparently a Star Wars nutjob, and I’ve covered the latest film in the franchise here, some months ago. (Wait… I’m missing something…)

Alright. Before I go on, I’ll have to put this out there: we know some confirmed spoilers. They’re nothing major, but I’m gonna be treating everything on this post like we usually do in our “Spoiler-free” reviews. You won’t hear tiddlywink from me about them.

Our source has come good with all their claims now that we’ve seen the trailer from Monday. So we’re going to trust this person with the majority of their other claims.

And while the source has come good, I’ve got a little… ‘present’ for them for when I see them (if I ever do).

Since I’ve already been betrayed, let me put it out there that the following preview for The Last Jedi is a NON-SPOILER zone. And, of course, spoilers for ALL previous films lie ahead.

So, let’s talk about the trailer a bit. We get to see Rey (Daisy Ridley) ignite THAT lightsaber again. Or… wait… Doesn’t that look more like Luke’s from Episode IV? I mean, yeah, sure. They’re the same lightsaber, but… what’s it with all this colour-flipping?! Is it teal-ish, or blue-ish?

Now, I’m no Star Wars expert, but I am a fan. Anyone know what this is all about? I’ll Google this later when I’m free to, but it’s something that bothers me. It’s not even an ambient lighting issue, FFS. We’ve seen this saber in the daytime and against lighter backgrounds before. Maybe it’s just a colour-grading thingie between the art directors between films, but man, is it fucking annoying.

So… we keep watching, and it seems Rey is Akira/Superman/Goku/Neo all rolled into one bae. Now, while I’m pumped as shit to see how they play Rey out in this film, but do we REALLY NEED the ‘bits and pieces lifting off the ground shebang’ cause… POWER!

I mean… it’s cool and all, but… fuck me. It’s getting old. Leave the effect to anime where it fucking belongs. If EVERYONE’s doing it, it’s nothing fucking special. Use your fucking brains. THIS IS MO-[REDACTED]-ING STAR WARS! Do something cooler. This franchise defines cool for so many people. Can we have some originality, please?!
Plz?!

Or is it canon now that there’s a “training mode”?

But hey! It’s not such a bad trailer. We get to see all the characters we’re looking forward to and we get a LOT of clips from the film. Now, it’s no biggie for me to say that the scenes are all out of order. If you’re thinking these are all just a few scenes, this is not going to go

…the way you think.

But what we DO see is Ben struggling between the light and the dark side. We all know this is going to be a major part of the story of The Last Jedi, and it’s nice that they put a big enough chunk of his hissy-fit issues in to keep us wondering if he DOES make the switch. Also: is he the one who Luke saw “only once before”? Or are we talking about something completely different.

Early last year, the Crow was asked (by our ensign) about what he thought the film’s title meant. His response was something along the lines of he just expected the what he’d seen in the prequels (I’m paraphrasing a lot, here, folks!) like the puritanical Jedi to no longer be a thing, and for them to find some new kind of ‘way’ (or something).

I mean… no shit, Sherlock.

Now… let’s just talk about that for a moment, and what I think about what’s gonna happen by the end of the film. These aren’t spoilers. This is just me rocketing out of my head-canon:

I think that Rey and Ben are going to get fed up with their ‘masters’ and go do their own thing by the end. That’s what the set-up for Episode IX will be.

I think Kylo’s going to break with Snoke due to his own personal problems (and what happens because of Snoke). Rey’s going to get fed up with Luke because he’s going to be very different from what she thought (or was told) he’d be. And at the end of they day, they’re going to strike out on their own while Luke and Snoke go at each other from behind-the-scenes of the ‘war’ part of the film (well, Luke, maybe not so much, but he’ll be there — believe you me).

Now, even though I know some spoilers, I still don’t know if this is going to be right or wrong. What I know are little parts of scenes and a few facts about supporting characters. The main story is still out of sight for me. That up there is just what I think is going to happen.

But you know another big think that bothers my Theory-sensitiveness? I don’t really think Snoke’s looking to kill Luke Skywalker. I mean, it’s pretty much proven by the fact that he orders BB-8 destroyed if Kylo can’t bring it back. Now, that’s interesting. Why doesn’t Snoke care about killing Luke Skywalker? Does he just think that Luke’s so happy hobo-ing it out on some random planet reading books?

And do you think Supreme Leader Snoke is stupid? Do you?

So… why? The first thought in my mind is that the two of these masters have something going on. While Luke is obviously laid back and isn’t very hands-on with what’s going on in the galaxy far-far away, I think Snoke actually needs Luke for something. What that is, we’ll have to wait for the film to drop to find out.

We see Poe, Leia (RIP), Finn, and Phasma too. Spoilers aside, I don’t really know where their characters find themselves in this story, and have no theories about what they’ll be up to in this film. And let me be honest here. I don’t really care that much about Poe or Phasma. Finn, maybe a little bit. Hopefully, Phasma gets a reason to actually be here, and hopefully Poe does something a little more than showing off his mad piloting skillz.

We get some cute cuddlies too! And you betcha I’m getting myself a Porg-plush when I can get my mitts on one.

But that little clip of Finn engaging in fisticuffs with Phasma? Oh birds… that’s gonna be so sweet! (please let’s have a joke about Finn dumping her down the chute in Episode VII! PLEASE!)

Now, it’s hard to say if a trailer’s good without seeing the film, too, but let me just talk about the trailer as it is. Did it get me more excited for the film? Yep. Did it spoil anything? Not as far as I know. Did it show enough to set up the premise? Well, it’s a franchise film, so I guess this one’s not so important.

So, yeah. It’s ticks the boxes. But come on. It’s a Star Wars trailer. Would it fail to excite people? This is a franchise that could chunder up a film and people would still put their butts in seats to watch it.

But even with a solid bet like Star Wars, they’ve shown off that they’ve taken care to build this world up for this specific ‘Episode’, and they’re showing us the paths which the characters are on, or are going to take. So yep — so far, so good.

One of the things I’m a bit annoyed with so far is this whole ooOOoOoHhhH! ‘Rey so strong!‘ shit This chick is kind of a stumbly Mary Sue when it comes to how good she is with the Force and machines. But then again, this IS the Force we’re talking about. Is there any ability that the Force can’t give anyone?

I want to see this character unpacked. I want to find out what makes her what she is. I want to know why she’s so ridiculously more powerful than Kylo/Ben. I want to know why Luke’s afraid of her “raw, untamed power” now (if he really even is. I don’t think he’s been withering away at all).

So yep. The trailer sorta ticks that box as well. But we don’t really know yet. Only the film itself can give us the answers I’m looking for.

It’s nice to see Snoke in the flesh, finally, and he looks pretty rad. But since he’s the character we’re being intentionally left in the dark about, I guess I’ll leave my speculations to what I wrote out above. For all I know, Snoke might just become my bae when I watch this film. I am, after all, interested in honing my… ehhh… ‘arts’…

But anyway… before I forget! It might be possible, thanks to recent information, we know that Andy Serkis knows where Snoke comes from and who he is, but that the character will mostly be left to Episode IX. Here’s to hoping we get some of our old wrinkly Force-Uncle in Episode VIII to really up the stakes.

Now, let me run through a few points: the tree is confirmed. What it does, I’ll leave out of my head-canon, since I don’t really want to muck about too much in my brain (it’s like an explosion in a crazy cat-lady’s house up in there).

We see Finn in what looks like a First Order uniform (?!) and stomping about all grumpy around a First Order ship. We get some shiny-cuddlies, this gorgeous fighter, aaand…

Okay, now I’m just rambling for no reason. Not my fault. I’m too excited. So… Imma stop myself here before I give anything away.

See you when the film comes out. I have some… ‘business’ to take care of…

Here’s the full album with the images used in this post (hosted at imgur.com)

Here’s the pretty poster we get to look at until the film comes out: 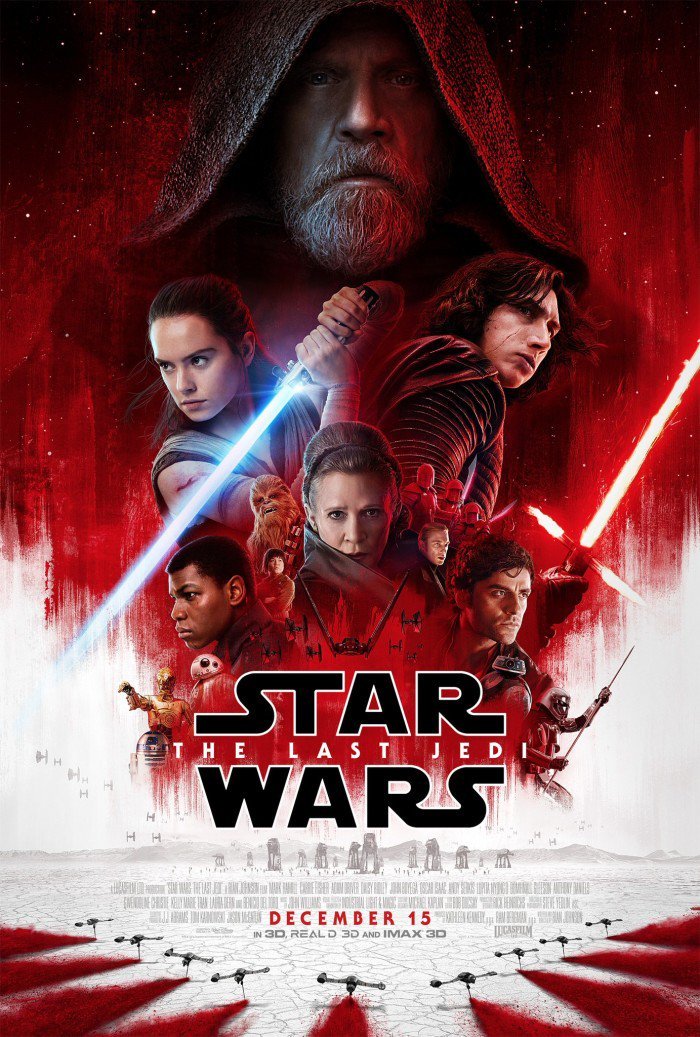