a News Update, by the Azure-Winged Magpie and the Crow.

NOTE: This update will contain speculation that could just be considered spoiler-y I guess. So don’t tell me I didn’t warn you.

I’m ripping off the format we’re using from our upcoming Shin Gojira review (nevermind. We didn’t).

CROW! Get your ass over here! We need to talk about this new trailer!

The Crow: What do you want?

The Azure-Winged Magpie: We need to talk about this trailer. Now.

The Crow: Okay. Let me take a look.

That was surprisingly… good. I’ve generally hated the Thor movies. This one actually intrigues me.

The Azure-Winged Magpie: You hated them?! How much do you score them?

The Crow: I guess one day we should write up a Top 10 of the Marvel movies so far. But just as a quick note, I guess I’d give Thor a 2.5/10, and the sequel a 4.5/10 (love Christopher Eccleston to bits for some weird reason; okay, no, there is a reason, but I’ll talk about that some other time).

And is that… Cate Blanchett?! Seriously?!

What about this trailer makes it feel better than the other films? 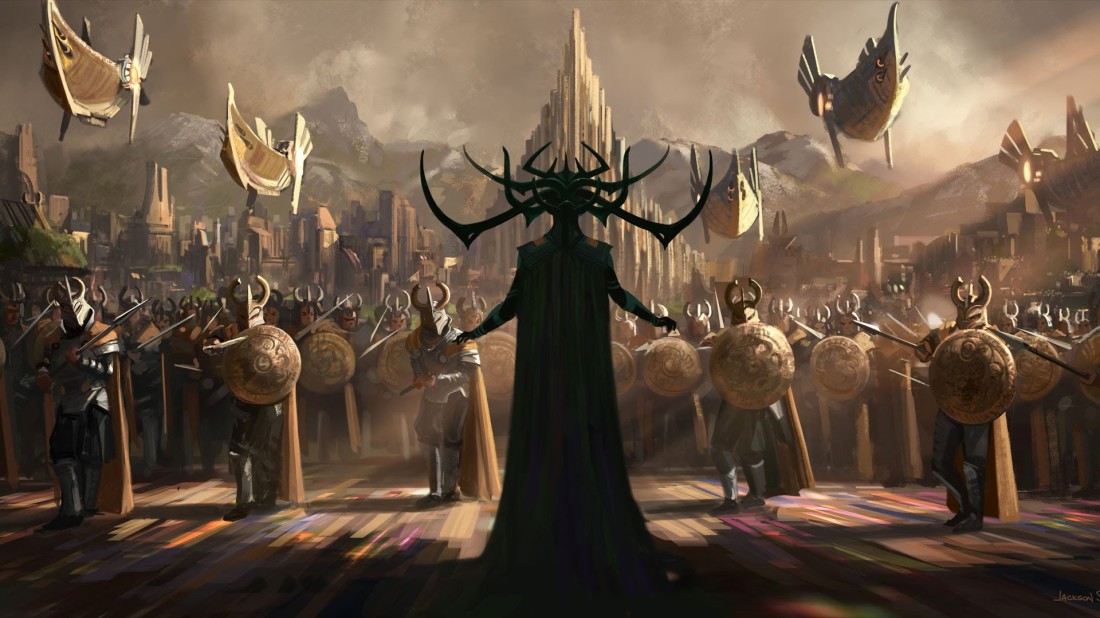 The Crow: I’ve always maintained that the first movie messed up by having the ‘out-of towner thrown into a small American town’ thing going on. The humour just didn’t work for me. Even with Kenneth Branagh at the helm (who I generally quite like), it just completely fell apart.

This one’s going to have a similar scenario in that regard. Just like the first Thor, and the last two Iron Man movies, we’re likely going to spend most of our time in the gladitorial arena. This one, though, seems like it’s going to be a much more polished and entertaining affair.

In that regard, Ragnarok‘s lucky to have Taika Waititi in charge. I had no clue who he was until just under a year ago, when the Raven showed me What We Do In the Shadows. That movie blew me away (and there’s been a review in the works ever since, that I’ve never got around to finishing) and I was happy to hear he’d been put in charge of a major production like Thor 3. I’m sure he’ll be able to handle the balance of humour with the serious stuff pretty well.

But even with that in mind, I was (and am) still fearful. Thor is one of the weakest branches of the Marvel Cinematic Universe, after all.

The Raven? Who?! I don’t see any “Raven” on our team-sheet. I see someone who broke protocol and went AWOL. She’s no Raven. Corvids don’t do that.THAT TRAITOR PRETEND-BIRD!

The Crow: For the record, I’m staying out of this one.

Back to Thor! Let’s break this one down. BUT BEFORE WE DO! We need to talk about the MUSIC.

I don’t really like the song they went with. It doesn’t click for me at all. And is that the Trent Reznor version from the American The Girl With the Dragon Tattoo?

The Crow: It seems so. After going over the trailer a few times, however, it’s kind of growing on me. 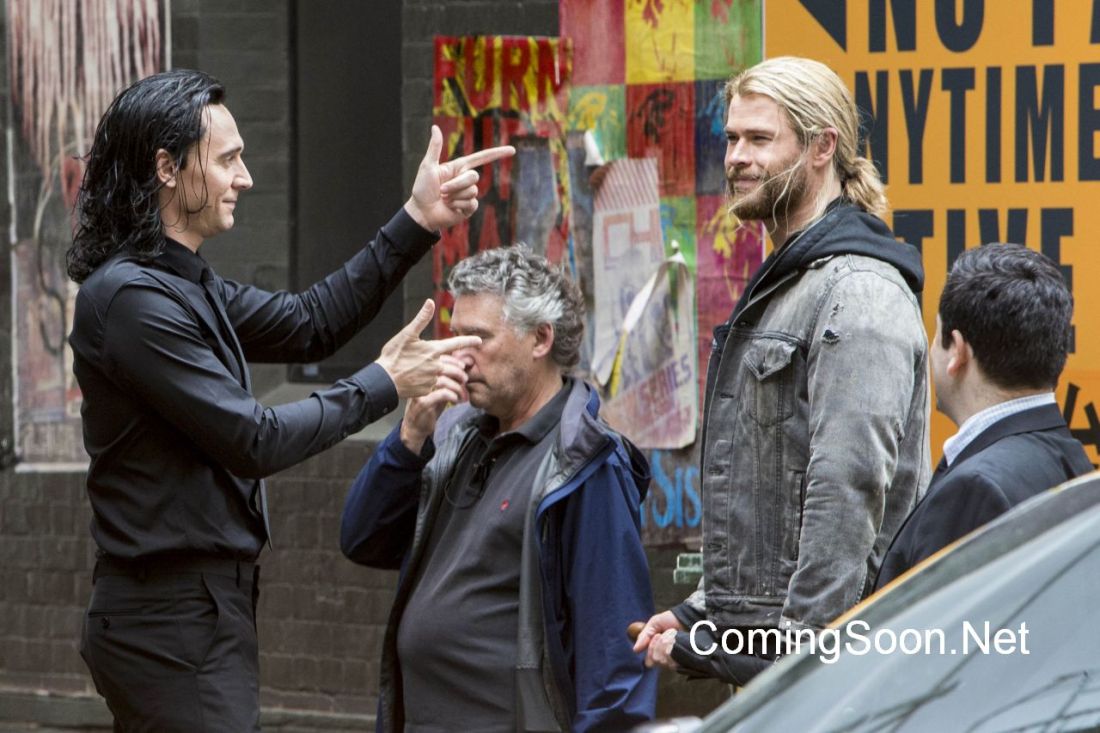 The Azure-Winged Magpie: So right. Let’s get into it. Thor’s all chained up. Then we find out how he ended up all tied down and roasting over a fire.

And his hammer BREAKS?! CATE BLANCHETT JUST UP AND MERKS MJOLNIR?! WHAT THE HELL WAS THAT?!

You’re the nerdy one. You better ‘slpain that shit to me!

The Crow: Apart from the fact that Cate Blanchett looks amazing as Hela (caught me by complete surprise), I’m not surprised they’ve gone this route. Similar to the first movie, they needed to de-power Thor. While I don’t know what it exactly does in the MCU, since we see Thor’s still retained quite a few of his superpowers later on in the trailer – breaking his hammer should do that.

The Azure-Winged Magpie: Okay. Okay. Let’s skip ahead to that part.

I love EVERYTHING we see about the gladiator scenes! HE’S WEARING HIS HELMET! EVERYTHING LOOKS SO PRETTY! AND THERE’S GREEN PUFFS OF SMOKE FOR THE MAIN EVENT! AND EVERYTHING IS ALL EPIC AND SHIT! AND WE HAVE… THE FUCKING

I CAN’T WAIT TO SEE THEM TWAT EACH OTHER ABOUT AGAIN!

I mean Thor’s pretty strong without his hammer since he’s Asgardian and all. So he should still be able to get thrown about by the Hulk. Like in Avengers Assemble.

But wait… if his hammer’s broke… how does he get his powers back?! Does that mean he’s just going to be another old Joe Asgardian from now on?

The Crow: Remember Doctor Strange? That movie had a post-credits scene in which Doctor Strange and Thor have a chat. I wouldn’t worry much, Doctor Strange’s going to be here to help fix Mjolnir.

Matter of fact, I even think that once Strange’s helped Thor find Odin, he’s probably even the one who saves them from being squished on the spot (unless Odin dies in this one). It’d be pretty cool if he spent the remainder of the movie reading up on Hela and Ragnarok and returning to help Thor at the very last moment (or after it, considering the Infinity stone he has in his possession). The Crow: Additionally, I should probably add that going by what I’d like to see, they probably shouldn’t complete rebuilding Mjolnir by the end of this movie, and that said story-arc should carry over to some point in Infinity War. However, looking at what they’ve done with previous Marvel movies, though. It’ll probably be fixed by the time of the final battle with Hela. Just look at Iron Man 3 for how impatient Marvel can be with these things. I pretty much completely expect Strange to bring it back.

From a writing perspect-

Anyway. Let’s get back to the fun stuff…!

I LOVE the “he’s a friend from work!” line. And I love that “YES!” moment. That’s just funny. And WHO THE HELL WAS BRAVE ENOUGH TO GET THE HULK INTO ARMOUR?! I mean… srs. How did that even happen?!

Okay. Okay. I’ll drop the jokey character moments. I have a question for the Crow…

What about the Marvel ‘science vs. magic’ thing we started talking about the other day? Do you think that Marvel’s going to go full on fantasy with their films from now on?

The Crow: I’m of the opinion that Marvel’s not gone very fantasy at all. I even think that Doctor Strange – despite all of its supposed magic – is an attempt at trying to ground the franchise in a more science-fiction setting. I see Clarke’s third Law in motion when I look at the MCU. I even think the first Thor movie has a line that even references it.

The Azure-Winged Magpie: Hm. I guess that makes sense. I think one of the BIG questions is if Thor and the Hulk are going to team up and rampage all over everyone at the end of this film. THAT’D be fun…!

I imagine the Hulk getting picked up Guardians of the Galaxy-style after leaving in Age of Ultron (or no… wait! After meeting Thor in Australia) and somehow being manipulated by Grandmaster into joining the fighting pits. It’d be fun to see him just wreck the arena and whack ol’ Jeff Goldblum around a bit.

The Crow: I’d say that’s pretty much a guarantee. Also, I’d like to see the Hulk fighting Hela as well. Maybe he’s one of the superweapons Thor could use in the climactic battle instead of Mjolnir. 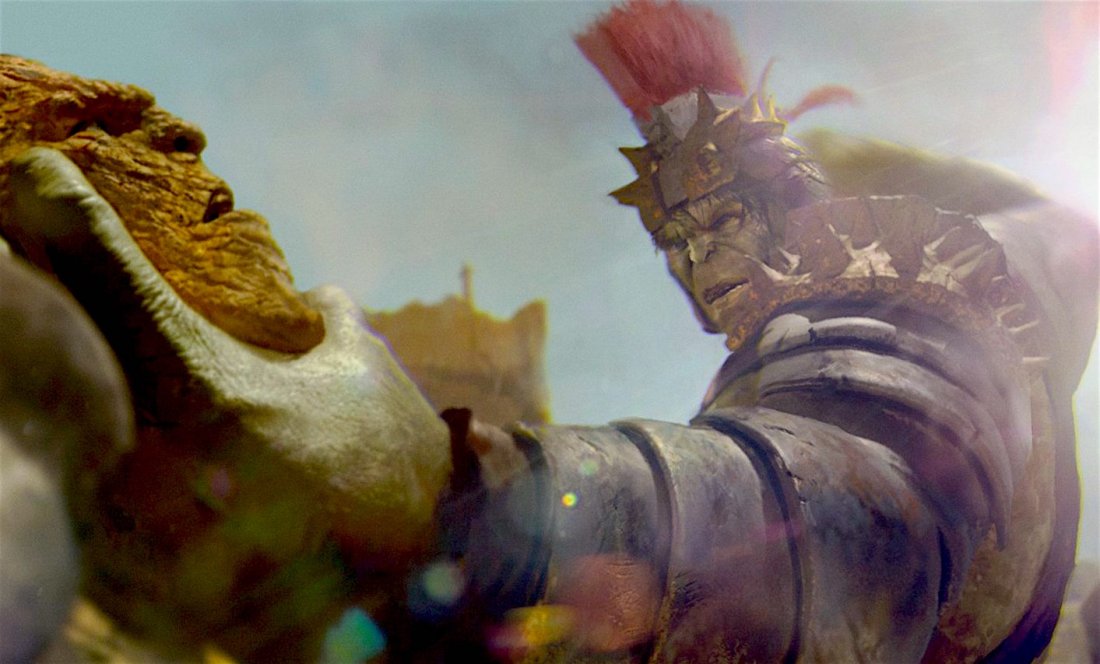 The Crow: And can I just mention how much I love Goldblum hamming it up in this trailer?! It’s amazing to watch/listen to. And OF COURSE Loki would be next to him while Thor’s in the arena. Typical.

And just imagine the banter they’d have between them. With Waititi in charge, this could be really fun.

The Azure-Winged Magpie: Thinking about it… I really need to watch that What We Do in the Shadows flick. All you do is praise it every time you bring it up.

The Crow: It’s very worthy of a watch. And a review, which I’m… working on.

The Azure-Winged Magpie: And oh man… they’ve got Hiddleston in this one. Hemsworth’s there. And Karl Urban(?)! And Idris Elba!

So MUCH eye candy!

The Crow: I’d probably even put Tessa Thompson in with that first list of yours as well. I’ve never seen her before. To continue with your line of thought, she’s quite pretty as well. I think they’ve got a pretty good-looking cast together.

The Crow: What? Am I not allowed to say that? I was just saying that they haven’t cast a bad-looking bunch of people for this one. It doesn’t make a huge difference to me either way, but it helps put butts in seats, I guess. 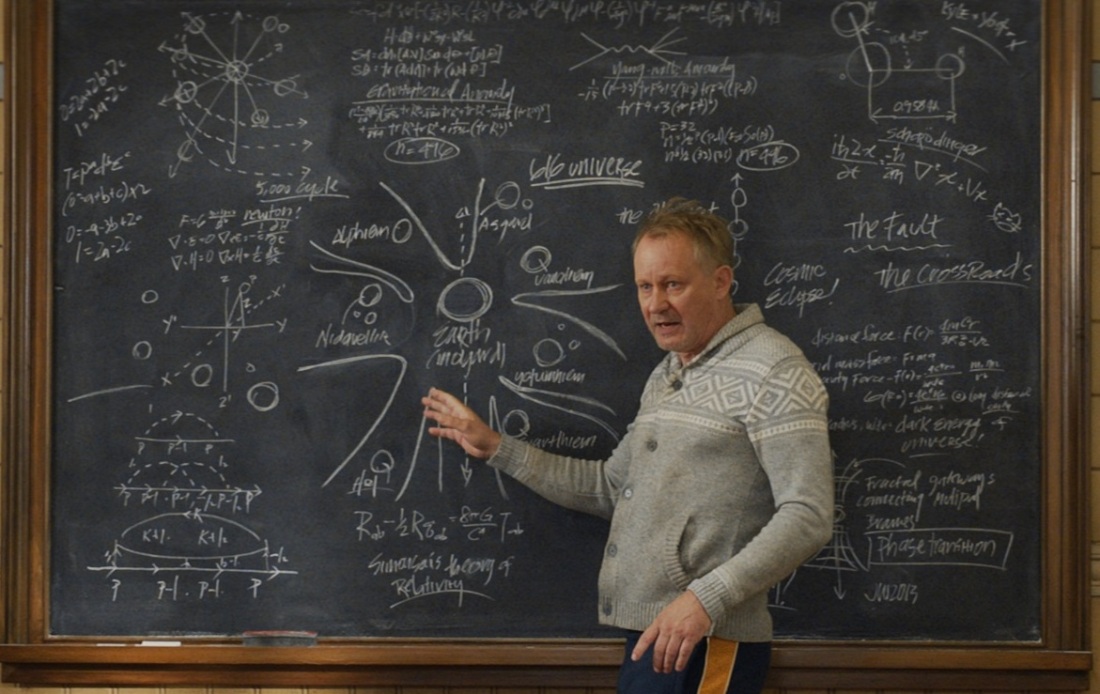 The Azure-Winged Magpie: No you can’t. I get to have all the baes I want. You don’t. You’re stuck with me. End of line.

And too bad Stellan Skarsgård ain’t in this one. Just look at that hunk of sexiness! Hnng!

The Crow: I’m quite curious about how Doctor Strange is going to mesh with the rest of the Universe, to be quite honest. I’m also a little curious to see how they explore the Scarlet Witch and her abilities. I’m a little sad that the FOX X-Men Universe isn’t exploring stories like House of M (which I once totally ripped off for a silly comic starring my schoolmates many years ago when I was bored in class). I really quite like Elizabeth Olsen as an actress, and it’d be really cool if they could at some point explore a similar story down the line in the Marvel Universe.

The Azure-Winged Magpie: Oh yeah… they really need to sort out this rights thing. I bet if they could work out a deal, they’d make stupid money between them. If they’d done it already the MCU would be so much bigger and better (AND we’d still have Hugh Jackman as Wolverine!sigh! for a little longer). 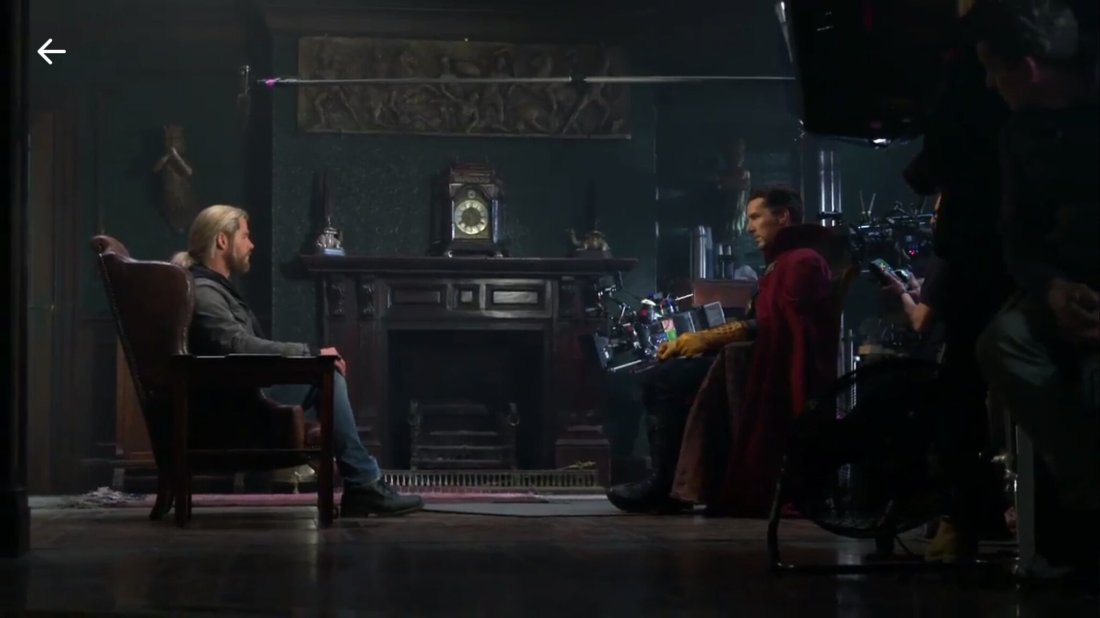 The Azure-Winged Magpie: So… I guess that’s us all talked out about the new trailer?

The Crow: At this point it’s hard to say too much about the movie since there’s only ONE trailer out so far. But it was good, and I dare say this one looks promising so far.

The Azure-Winged Magpie: I kinda love how Hela in this one reminds me of Rita from Power Rangers a bit. WHICH YOU NEED TO REVIEW AND SCORE YOU TWIT.

The Crow: I’ll do it, sometime.

The Azure-Winged Magpie: So… next up we’ve got Shin Gojira up for all you awesome readers of ours! It’s going to be a LONG read and we’re putting everything we’ve got into it.

The Crow: IF we get it done, that it. Anyway, good talk. I’m heading off for the moment. Laters, everyone.

The Azure-Winged Magpie: Oooh! The Crow’s gone! You know why I love it when he leaves? Because I can do THIS:

The Azure-Winged Magpie: Anyway. There’s a special little day coming up soon. So I’ll just let you lot know I’ve got something fun planned for it far as this blog’s concerned. Expect lots of awesome things to happen on the day.

Magpie… up up and AWAYYYYYBONK!