Recently, the Azure-Winged Magpie came across a trove of short films.

Usually, I’m not the kind for short films, but I decided why the hell not? I’ve done pretty much nothing apart from Ghost in the Shell for the past week (and there’s still a lot more for me to go through up until the release of the 2017 live-action movie). To top it all, this thing’s only just over 15 or so minutes long.

I performed only a very cursory check of the movie once she told me about it, and initially thought it had something to do with 2009 Lost Memories (a movie I honestly didn’t much like, although it had potential).

Well, it doesn’t. It’s a wholly separate project. From the few images I found on the net, I gathered it had a cyberpunk flair to it, and had the kind of sheen one expects from film students who’ve spent too many an hour with After Effects.

(To be quite fair, I overdo my own material all the time, I just kick myself down a few notches afterwards, so I can’t completely blame other people for doing the same thing.)

So, let’s get cosy with this short movie and find out what I really think about it, shall we?

Early worm warning: I’m probably going to give away major spoilers because I just watched it right now and want to address certain points which would certainly count as spoilers.It’s also really, really short.

WARNING: THIS IS A FULL SPOILER REVIEW

We open with a very cursory introduction to our nameless protagonist (I’m going to call him the man) and the world he lives in. In this world, everyone’s connected by a network known as the Cloud 2.0 (inventive!).

Some years ago, the original Cloud went down for some-reason-or-the-other. Between the time it went down and was brought back (I mean, seriously… it took four years?! How crap are the people working on this shit?), he lost touch with his presumed girlfriend (who I’ll call the photographer).

The movie’s delivered in flashbacks, triggered by him relating his story to someone-or-the-other, as we soon find out. He wanders around Paris, looking for her, he resurrects his art gallery business, he whines a little about how lonely he is. And then, unable to cope with the loss of his bae (I despise that word), our knight in shining armour visits hookers.

He refuses the first one to proposition him, but accepts the next ones’ offer. It turns out (later, to us) that this is something he does quite regularly.

Now, when I was looking for images for this blog post, I had trouble finding images that had nothing to do with the extended scene with the sex-worker, since I feel that it might make the post (and therefore the movie, for those of you reading this first) look a bit too… duotone. And just look at what I’ve ended up with…

Seriously, if my laptop were still running at full-functionality, I’d have screenshotted this thing myself and got some images not involving mad rumpy-pumpy.

You know what? Let me do something about that. Let me get some new screenshots up. They might not be the best crops, but I’ll do my best.

Anyways, like I said: they engage in some vigorous love-you-baby-long-time, and he spends what seems like stupid amounts of money before crumbling and sobbing “like a small child” (and the face he makes before he breaks down is, quite honestly, hilarious).

She’s a gynoid along the lines of those from Ghost in the Shell 2: Innocence (just without the geisha theme so commonly-associated with them), as a matter of fact. She used to be a nurse. When the cloud fell, she fell into disuse, and was “reprogrammed” as a sex-worker. It’s just someone forgot to delete her memories, and that haunts her.

Now, these are themes quite common in SF, and they’re themes I’ve done a good deal of thinking about, and from my perspective, this is very, very straightforward. Almost childishly so. But I guess I’ll forgive it this time, because in light of the rest of the content of the movie, it fits pretty well.

But even with that defence allowed to the movie, I still do wish that people took these ideas a little more seriously because it’s been done to death, and can be done better. How long are writers going to be so lazy about these things?

To return to the action-on-screen: she asks him to “deactivate” her. And after a moment’s thought, he does. And then he leaves, returning to the hunt for the photographer.

I have a question, here.

So, this gynoid is a bought-and-paid for piece of merchandise. While sure, she has “feelings” and all, she’s meant to be wiped. We don’t really find out if those/the person running her know/s if she still has her old memories and/or has developed (or is really damn good at simulating) feelings. And EVEN IF that was all valid, the man just… deactivates her?

One of two things should happen at this point. One: let’s consider that her “owner” is actually a nice person and cares about her/his merchandise on a level beyond simply looking at them as businessware. Unlikely as that last bit is is, given everything we do know, s/he’s at the very least going to tell the bloody police one of their customers has just caused damage to their property. Or, on the other hand, the more likely option two: find out who the hell damaged their goods and get their money’s worth back.

Either way, that one button-click should cause a world of trouble for our man.

But no. He gets reconnected to his old girlfriend via an artist he becomes acquainted with. And she comes and visits him.

I mean, all they needed was a line showing he felt some regret about deactivating the gynoid and/or saying that he got into some smidge of trouble for it. It is, at the end of the day, robo-cide, after all. I was honestly thinking that someone was going to come grab him halfway up until the end.

Up until the man’s little talk with miss robo-prostitute, I was hdlf-expecting her to be something other than an actual girlfriend. To me, that just seemed more interesting from a story perspective.

But the girlfriend, now restored to his presence, tells him that she became disillusioned with him because he spent more time with the network than with her.

Yeah, I completely get that. I know a fair few people who do that already, in this day-and-age, and it annoys me to no end. I mean, i you’re going to spend anywhere over 50% of the time on your phone when around me, why exactly are you here, then? I don’t do that out of respect, and because I genuinely want to spend time with the person I’m meeting. If you can’t do the same, I don’t take any disrespect, but just go meet someone who’s alright with it, is what I say. Keep me out of it.

And because I understand her point, I don’t understand the ending whatsoever.

She tells him about the differences between photos taken on film as opposed to digital. This is something that’s been mentioned earlier in the short (the fact that she takes “polaroids”), and it’s nice to see it being used as a plot point. She exists in the “real” world, she says, and she cannot stand to see him in this “virtual” world, pretty much. There’s a lovely line about film photographs “sizzling” with life (that works brilliantly once translated, too).

I’m expecting her to tell him she’s moved on (it has been four years, after all), or to issue him an ultimatum if getting back together is even on the cards. And what does she do?!

Reach over and grab his hand in sync with him, is what she does… while he’s very obviously still connected to the network and smile all lovey-dovey into his face.

Woman. Do you know how to get things done? You’re willing to go back to that trainwreck of a man?! 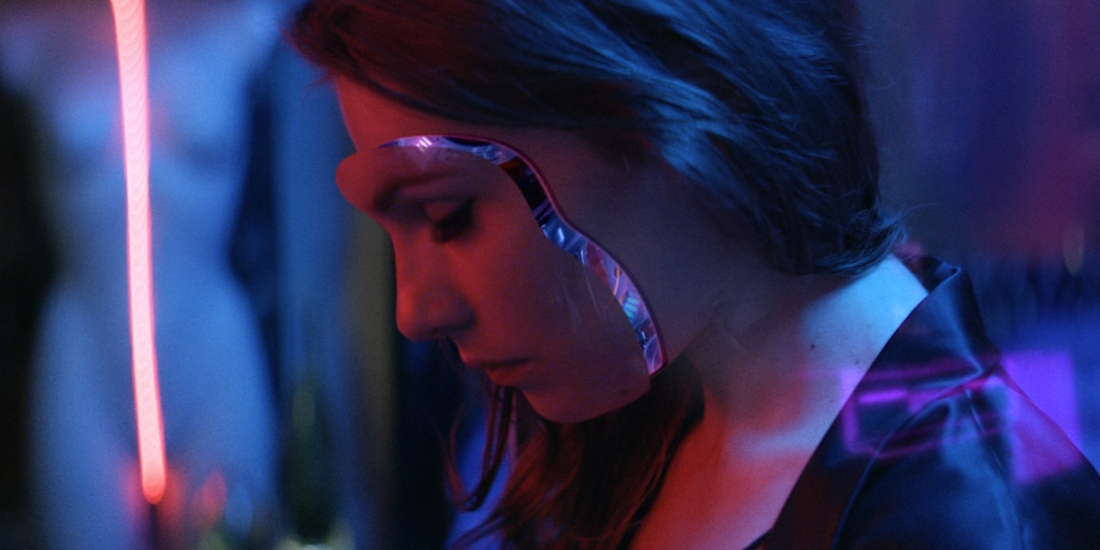 Yes, it looks nice, I guess.

There’s some hilarity in the fact that despite all that talk about “polariod photography”, the movie itself is shot digitally, rendered in glitzy After Effects overdose throughout, and intended for distribution primarily through the web.

There’s a good project in here, somewhere, but it’s lost in the maze of bullshit that’s thrown up on screen in the final product.

The whole thing just stinks of one big missed opportunity. It has good things going for it, but delivers a hugely subpar end-product. It could’ve been so much better, but it shoots itself in the foot over and over again. 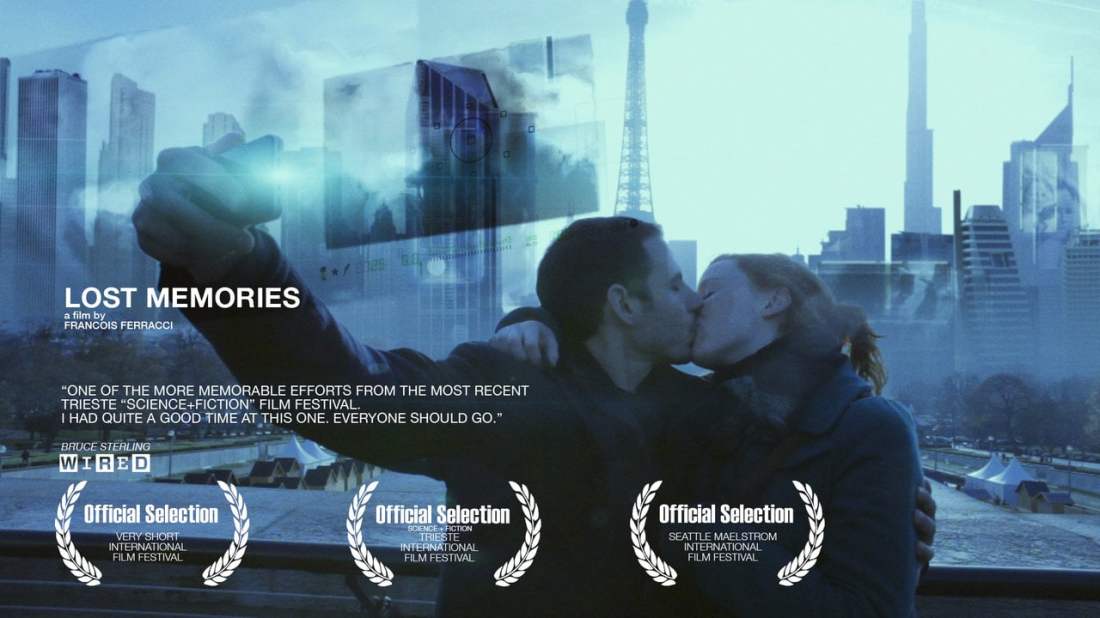 Look, this thing is 2 minutes and 48 seconds long.

And there’s very little in it. Guy takes photos of him and his girlfriend, shares them on the internet, loves having “likes” and “shares” on them. Girlfriend feels neglected, takes an analogue photograph of him, hands him the print-out, and goes away. As she does, the Cloud crashes around the guy. The last shot is of the guy sitting with the photograph.

What do I think of it? Not much. It’s a neat little vignette, but I’m not going to score a vignette. My final score remains unchanged.

Magpie note: I get what the Crow’s saying.

Nah, screw it. He’s right. I watched it again. It’s troubling as hell that she goes back to him. It’s pretty though.