Note: This post was originally published on the 16th of December, 2016, and covered only the first three episodes of 2016’s Berserk. This is a new, expanded, and improved version as of DATE. To read the original, click here.

a review by the Azure-Winged Magpie
ft. the Crow! 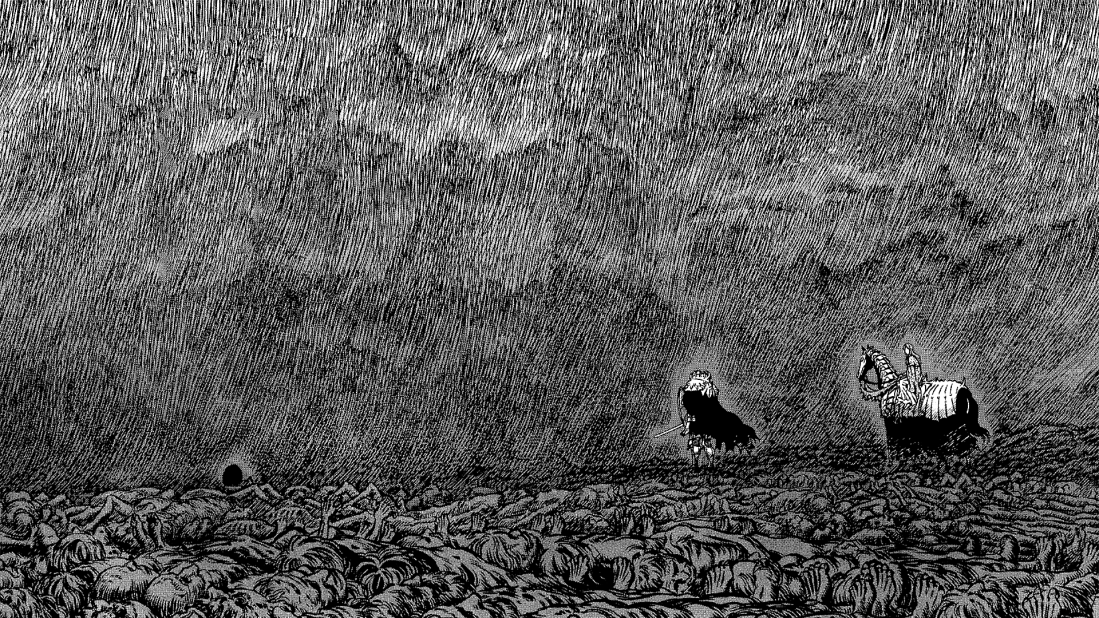 Magpie warning: This post became SO long that the Crow suggested I break it down into multiple parts. And so this entry will only cover the first HALF of the 2016 anime.

So… advance warning: this is still going to be a LONG post. I’m going to swear. There will be NSFW stuff in it. We’re talking about Berserk so… you  DEFINITELY shouldn’t read this at work. If we were having this conversation in person, I’d be ID-ing you. 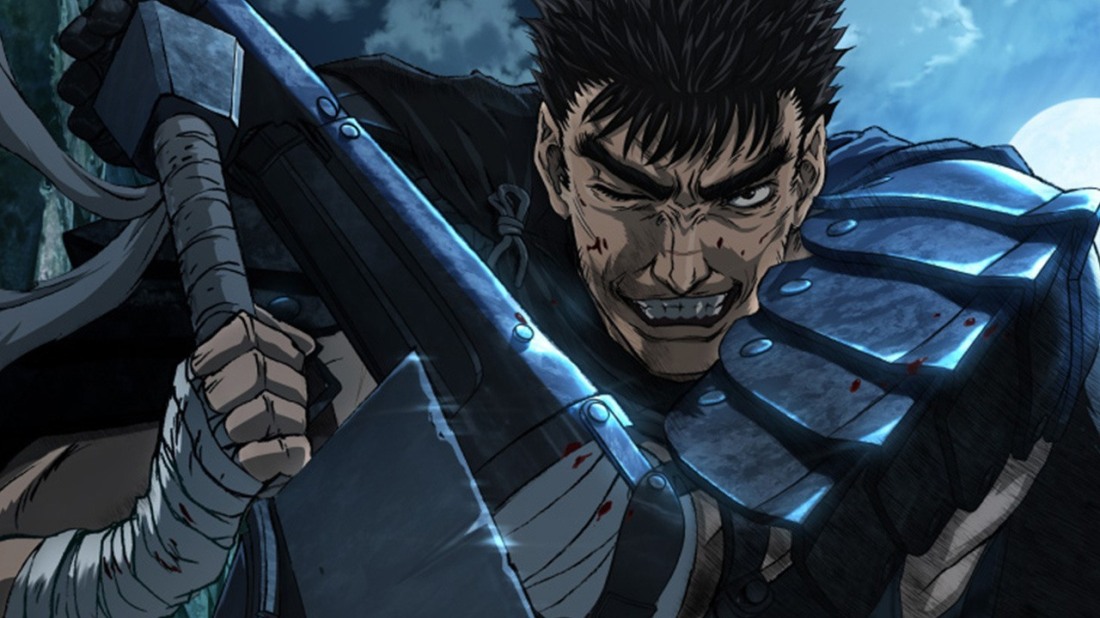 Anyway! Berserk‘s one of my favourite things ever! It’s brutal. It’s unforgiving. It was Game of Thrones before Game of Thrones was cool (and it’s even cooler!). It’s fucked in the head (which I love!). And it’s back!

I’ve been a fan of everything Berserk for a long long time and I’ve converted quite a few people into getting into it (eg: the Crow). The one thing I love about Berserk is how downright horrific the stuff happening in it is. And it’s still so interesting in spite of all that shit.

WARNING: THE SECTION BELOW CONTAINS ALL THE SPOILERS

So, we pick up some time after the ‘eclipse/Advent’ event that creates Femto out of Griffith. Guts is all on his lonesomes – one-eyed/one-armed. He’s finally become the Black Swordsman! in full.

The 2016 series covers parts of both the Black Swordsman and the Conviction arcs of the manga. Now… I was disappointed that there has been no Lost Children Arc material in the anime versions of Berserk but I was happy to have new Berserk anyway. I was SO pumped for this show. And here’s what I thought – blow-by-bloody-blow:

(And by the way, I’m not going to bring the manga up too much. I’m going to look at the serial as its own thing.)

The first episode of the 2016 series introduces us to Puck (and Isidro makes a small appearance as well). It’s pretty standard as far as intros go. It was kinda a let down when you think about what’s come before it though.

It’s not bad. But it’s not great. The first thing that popped out at me is the 3d animation. It really doesn’t work so good. It sorta worked in the Golden Age Arc films (okay not so much) – but it really doesn’t fucking work here. The CG monsters look like absolute shit. In this episode it’s not so much of a distraction. But as I go through the episodes I’ll point out the stinkers here and there.

A big point I have with this serial right off the bat (well we’re talking about the first episode after all) is how Guts is … acting a little strange. He’s a little different here and it really kinda took me out of the story at times.

There’s really not much to Dragonslayer. It’s just a set up for what comes after. Guts is just a bad-arse (I mean let’s face it – that’s the one thing Berserk never fails to point out over and over and over) and he rips up some skeleton thingies. An old man and his daughter bite the dust along with some random enemies. The only real important thing is that it refreshes viewers on what a day in the life of Guts is like – and it introduces us to Puck.

Immediately after Dragonslayer up there Guts is surrounded by The Holy Iron Chain Knights.

And …what’s this?! Guts LOSES.A.FIGHT?! …wut?! I mean… I get he’s tired and all from the fight with the girl and the skeletons. And Vice-Commander Azan (who shares a mutual respect with the Black Swordsman) is clearly a formidable foe. But damn. Berserk actually showing us Guts isn’t unstoppable for once?!

Anyway. This episode sets up some story elements for the rest of the season. Guts is interrogated about what happened during the eclipse by the leader of The Holy Iron Chain Knights: Lady Farnese (who we’re going to get very …comfortable with in the next few episodes) even though it’s really Serpico who sneaks in the final blow. Once night falls Guts’ brand starts attracting demons. Puck manages to free Guts and together the two go to get Guts’ stuff back.

They come across Farnese half-naked and whipping herself (these nutty religious types make me look normal). They take her hostage and run the fuck away. Serpico dashes out after them and the episode ends with him surrounded by the demons chasing Guts.

What I like about this episode is how it gives us story over Guts just being awesome after Dragonslayer.

The first thing you need to know about this episode is that there’s a LOT of naked-Farnese.

Now I have a thing for naked anything. But here’s one thing I want to point out: this is Berserk. Read that again carefully: This is Berserk. Now repeat after me:

WHY IN THE ASSFUCKING FUCK IS IT CENSORED?!

Fuck-dammit… What the fuck is going on?! It’s not even fucking censored all over. It’s censored horribly. One thing I had a problem with even in the last episode was that no tits apparently have nipples. I mean… look at this shit (NSFW image). They’re actually there though. They’re just not fucking textured. Even the Crow went ‘wtf?’ (bless that innocent child) when we saw Farnese jiggling around on Guts’ horse.

I mean for fuck’s sake guys. Berserk has tits, blood, guts (hey-hey!), bones and all sorts of NSFW shit in it. Farnese is naked throughout the fucking episode and the way you “censor” this episode is you just reduce the emphasis on her nipples?! I know it’s a small thing but it’s a symptom of a much larger problem. This fucked-up half-censored crap nearly breaks the show.

I’m not going to talk about the story of this episode (don’t worry – there’s not much here). This episode was where things started going wrong for me in regards to the serial as a whole.

And the scenes with the dogs and the scene with the horse… these are meant to be scary fucking scenes. And what do we fucking get? 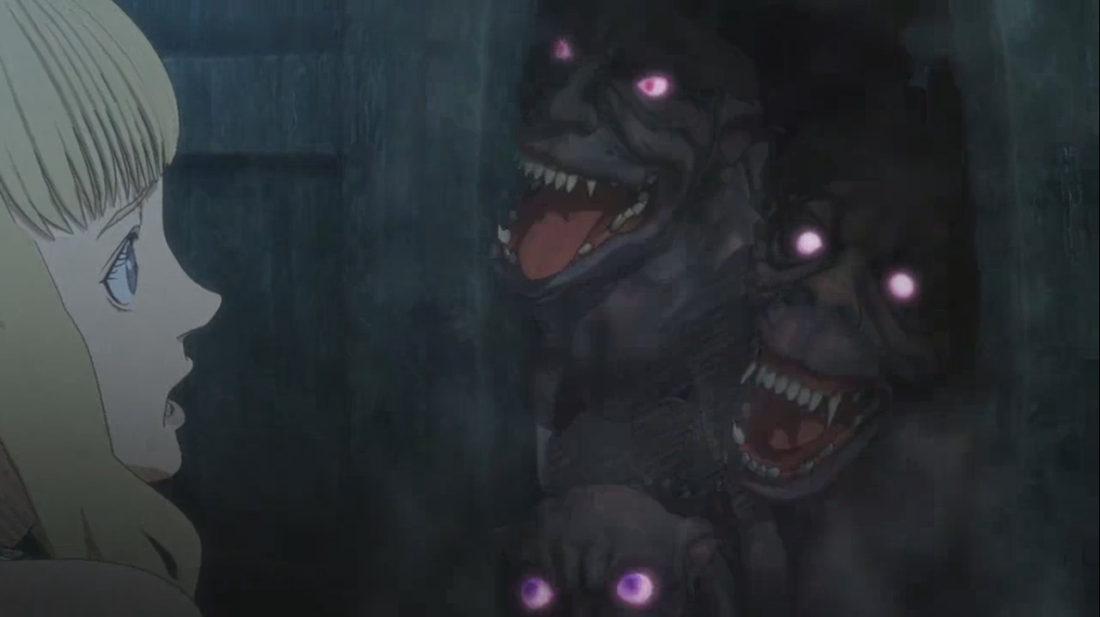 The scene with the horse had me squirming when I was reading the manga. And what do they do in the 2016 anime? (Super NSFW pictures warning!)

I was laughing my fucking arse off both times I saw this episode. And the look on the Crow’s face… priceless. This was us on the day:

It’s really fucking hard to take this serial seriously if the demons/monsters make you fucking laugh because of how crappy they are.

The only thing good about this episode is that little thing at the end about Griffith’s upcoming return. And even that’s ruined by how crap the rest of the episode was. Guts goes back to Godo’s after having visions of Casca being burned at a stake and having his “baby” tell him that Casca’s in heaps of trouble. And he finds out she’s …gone.

EPISODE 5: THE TOWER OF CONVICTION

We finally get to see

EPISODE 6: NIGHT BANQUET OF BURNING AT THE STAKE 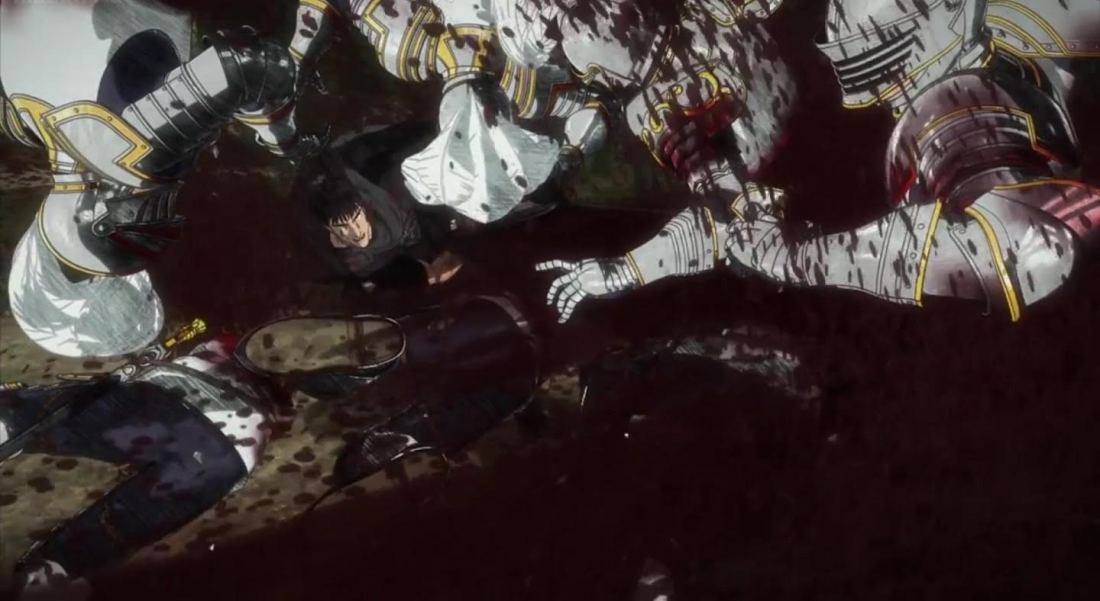 COMING UP IN PART 2

In part 2 of this review series I’ll be looking at the final six episodes! And the Crow’s going to be there too!

Expect to see it on The Corvid Review before Christmas.

We have a lot of things planned out for the coming months. That’s why we’ve been a bit more silent than usual. Currently our list for upcoming reviews is:

Hopefully we’ll get them all up in the next 7 days. Until then… see yous bitchuz laters!