a few thoughts by the Crow.

One year from today, the Justice League movie will be released (if nothing happens in the meantime to change the release date).

While this crow originally intended for The Corvid Review to do a “thoughts” post on the upcoming Hollywood version of Ghost in the Shell, the date fits, and so this crow is going to hop over that draft and get to Justice League first.

Now, this crow’s thoughts on Batman v Superman: Dawn of Justice couldn’t be clearer, and in light of what I’d said in the final lines of that review, let’s hope it’s not all “downhill from here”.

Now, just to point this out: this post is not going to put the DCEU up against the MCU, since they’re really very different. While DC’s certainly playing catchup in the movie department, both franchises are going to turn out different. Yes, Thanos is promised for the next Avengers movie, and [REDACTED: SEE BELOW] is promised for the future Justice League movies. However, both thanks to the backgrounds of the franchises involved, and how they’ve gone about their respective businesses, they’re destined to be different.

That stated, let’s go over what we know so far as we know it: 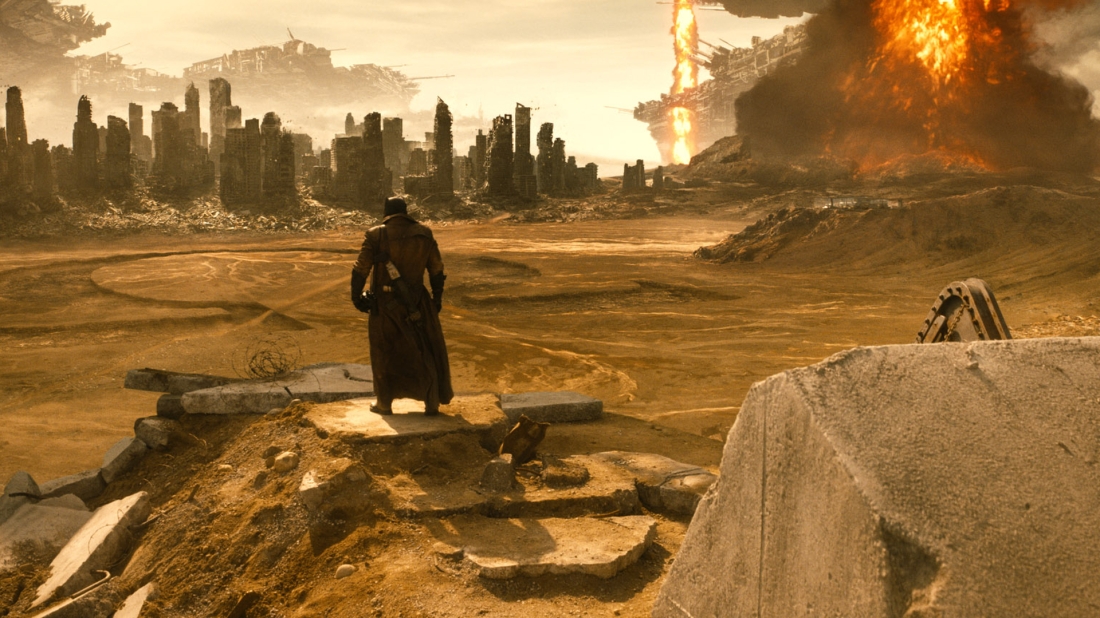 The (future) Flash has already seen what’s coming, the timelines can be split (of course they have to be) as far as the evidence states, and that’s what’s coming. The “key” is apparently Lois Lane, which is an idea which carries some weight in and as of itself for where the story’s headed, however, the franchise has already twisted key characters (eg: the Batman yuck! and Jimmy Olsen most significantly), so it could very well surprise us.

This crow, for one, is interested in how Darkseid will look in the movies, to be honest. Steppenwolf from BvS already looks radically different from most of the dude’s incarnations in the comics. However, Darkseid’s iconic look would be hard to change too much without turning a few heads, but we’ll see.

I’m not going to mince specific stories from the comics here, since not only are elements from different storylines going to be stewed together, but also because anything of that sort would go on forever.

Superman’s in his coma state (oh, come on!), and is to come back, but will he be friend or foe? While this crow is massively disappointed in how Superman (as underwhelming as he has been) has been dealt with since Man of Steel, interesting things could still be done with the character. It’d certainly be interesting to see the franchise explore an evil-leaning Superman instead of the doorknob-brained boy scout we’ve seen so far.

It’d also be a way to give us an actual ideological battle between Bats and Supes after BvS‘s disappointing showdown. While it wouldn’t redeem that pile of garbage, it would certainly make some ground up from it.

Anyone who’s familiar with the comic storylines will have inklings of what they’re trying to pull off, here. Hopefully, they don’t screw it up.

The Wonder Woman trailer looks,  well… wonderful. A bit cheese-laden, but quite nice. The Flash has so far been a bit anonymous, and Cyborg and Aquaman even more so; although Jason Momoa looks great in the Justice League trailer (what an upgrade to the character!). Cyborg doesn’t exactly catch the fancy of this crow’s aesthetic sensibilities so far, but I’ve seen too little of him to judge.

The biggest hurdle, of course, remains director Zack Snyder’s insistence on trying to be “cool”. While he didn’t learn by the time BvS rolled out, there’s hope that he might’ve learnt to get beyond this naggling itch while editing Justice League (now that filming is complete). Suicide Squad‘s troubled post-production also has got to serve as a warning for where the DCEU’s screwing up.

On top of all that, while we’ll have Parademons and the new upgraded Steppenwolf in the equation, perhaps going lighter on the impossible-to-parse special effects would be in order. It’s just nice to be able to follow what’s happening on screen.

Let’s stay hopeful, but be a bit concerned at the same time, that the DCEU doesn’t overdo it with the material while skimping on the detail once again.

This crow’s a bit worried, considering the material they’re tackling, and because he absolutely hates the new version of the Batman, but hey, these people are meant to be professionals, they’re supposed to get better, not worse. Right? Right?!

In any case, we’ll find out next year.

Click here to view the official trailer for Justice League