It wasn’t until earlier this year that I first watched the second instalment in the Captain America franchise. It was a night of drinking and playing cards with friends, and once I had thoroughly rinsed the opposition at Whist (or more accurately: the pizza arrived), we watched The Winter Soldier on a whim.

After being a bit unstatisfied by the first Captain America movie (not that it was bad), I found The Winter Soldier to surprisingly be a far more solid movie. However, a few tiny flaws held it back a little too much for my liking. Much better, but nothing great — although in hindsight I find myself looking upon it more fondly than I would’ve thought.

I was never a big fan of Captain America from the comics, but the first two movies — and the Avengers movie — had set up a solid base from which the movie franchise could work towards settling out a trilogy without running itself into the ground. So, when time came around, I walked into Civil War expecting nothing much; but still a little hopeful.

The core of the idea is: Age of Ultron was such a disappointment that I’d begun to think that the MCU was beginning to show signs of “franchise fatigue”. Since I haven’t yet seen Ant-Man, it was either make or break with this movie as far as I was concerned. It was either going to be really bad, or rather good. What it couldn’t be was middling. The MCU’s gone to the point where playing it safe with a long-running franchise like Captain America would actually be folly when you title it Civil War. 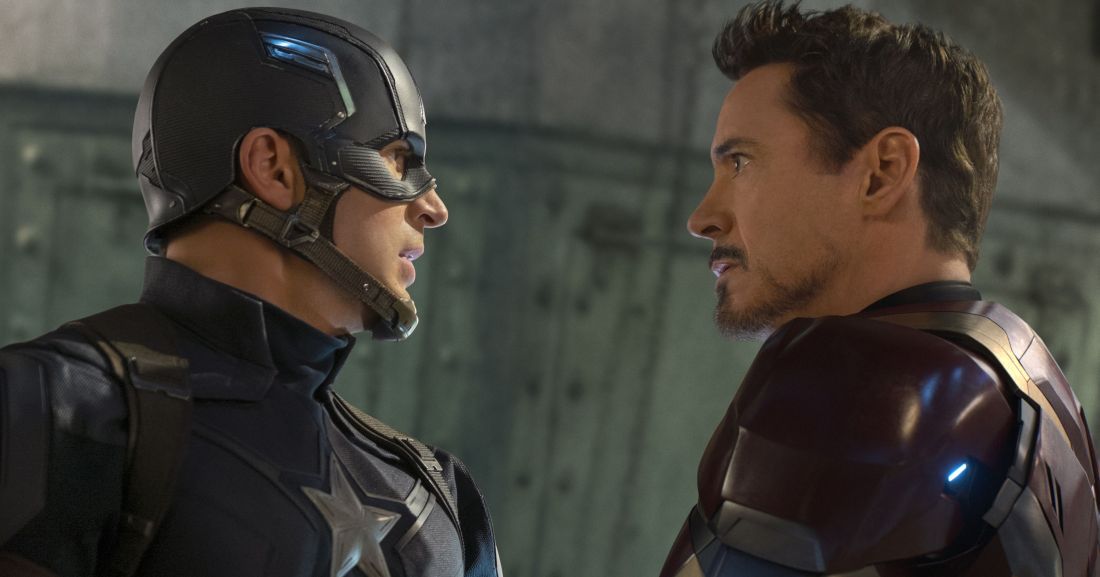 Following the events of Avengers: Age of Ultron, the Avengers are roaming the world cleaning up the loose ends from their previous encounters. The “intro battle” of this movie goes South (RIP Crossbones) and innocent people are inadvertently killed by the Scarlet Witch. In response to this, the Avengers are expected to sign an agreement called the “Sokovia Accords”, and accept the UN oversight that will come into play thereafter.

This causes an immediate rift between the Avengers, especially when Tony Stark is brought back to help out with/enforce the decision. Tensions begin to build immediately between the Captain and his counterpart as it becomes clear that both men are completely opposed to the other over the Accords.

At the meeting where the Accords are to be signed, an explosion is triggered, and among those killed is the Wakandan king — the man presiding over the event. The lead suspect is one Bucky Barnes — the Winter Soldier. Rogers rushes from the funeral of his old love interst Peggy Carter to track him down and run him off to safety. Things go South once again, and Bucky is then on the run not only from the local constabulary, but from a mysterious black-suited, feline-styled man as well, all while Captain America and Falcon try to help him make good his escape.

They end up caught anyway, and our feline-styled man reveals himself to be prince T’Challa of Wakanda (the Black Panther, finally!). They’re collectively (all four men) thrown into prison, and that’s from where we get to our main villain.

Of the things the movie handles well, Helmut Zemo is one. He’s not really the character from the comics, but is he ever a great villain. You know how Age of Ultron was meant to make things more “personal”? Well, Zemo’s motivations are far more personal than anything Ultron had going for him.

Once Zemo weaves his way into the story, Bucky goes on a rampage after becoming “activated” as the Winter Soldier. Following a tense battle, the Captain and he regroup with Falcon. The three uncover Zemo’s involvement and decide to hunt him down with help from some other assorted superheroes.

Racing against them, Stark assembles his own splinter group (including the new Spiderman), and the two sides face off at an airport in Germany. And at long last, after so many one-on-one tiffs over the years, we get our first superhero team vs superhero team fight in the MCU.

And what a fight it is.

Once the dust settles, despite “losses” on both sides, Captain America and Bucky go off to find Zemo at his hideout, with Stark deciding to aid them in their quest once he discovers the truth about the bombing in Vienna. 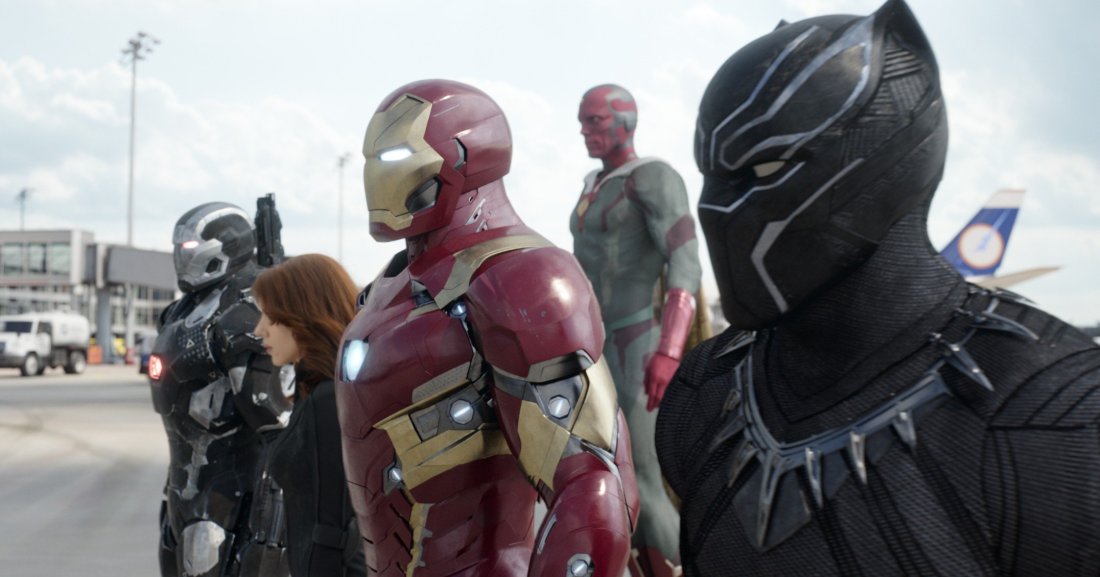 The plot handles everyone’s motivations brilliantly. The script allows every single character to come alive in their own right, and that helps make each of them more relatable. The best thing about this is that because everyone’s pretty much at odds with everyone else, because sides are changed and temporary alliances are formed, it makes for a rollercoaster ride for the viewer.

The final moments are a wind-down following the climactic battle, and each and every character has their destination set. All in all, this is not just the best Captain America movie, but the best Avengers movie so far.

The movie is produced with high standards in mind. This crow will therefore only concentrate on some of the movie’s flaws to begin with.

Everyone seems to have at least some form of Captain America serum running through them. Even ordinary Joes are capable of mind-bogglingly superhuman feats. Take Rhodey, for instance: just like I said would happen to the Batman in my BvS review, that fall should’ve outright killed him. The Stark suits have no way of defending against impacts like that. Not once is it even technobabbled away. Stark and Rhodey should’ve been dead long ago.

The same applies for Ant-Man.

At a few points, the humour seemed a tad flat. But that’s actually not a real problem. The movie’s ominous, brooding overtone is hard to pierce through.

The performances by each and every actor (including one Martin Freeman, his silly accent notwithstanding) are top notch, and the action is beautifully choreographed.

Where do I even begin with this one?!

Let’s start with Captain America himself: the man plays the part of the soldier with authority, despite his misgivings about his superiors. We finally get to see him fully step out of the grip of orders from on high (although he has done so on occasion before) and become his own spearhead.

Iron Man is, as usual, fun all-round. The only two highlights (and he has quite a few) of his performance here are his reaction to finding out the truth about 1991 (which he carries right through to the end), and how hurt he is by Rogers’ referral to Barnes as his “friend”. Both moments are effortlessly played through Downey Jr, but add so much to the movie.

Bucky Barnes/The Winter Soldier is pretty much what you expect of him. When I heard that they were going to have scenes shot in Romania, I was at first excited that Constanța (where Stan is from) would make an appearance, but we get Bucharest again. Not bad. Not spectacular, either.

Helmut Zemo is not a man to be taken lightly. He has no powers, no nothing. And yet it’s he who finally tears the Avengers apart. One year, he’s seethed with revenge. One year, a bomb, and a book is effectively all it takes for him to get the job done. I really hope his next appearance builds on Brühl’s menacing performance.

Black Panther! We finally get to see T’Challa, and how amazing the man is. Marvel’s got him right. This is exactly what I’ve expected to see, and they’ve crafted him perfectly.

I won’t go into too much detail about the rest of the characters, because they all do admirably. Spiderman was great to see back in action, and it’s nice to see the MCU building on the Scarlet Witch and Vision‘s relationship. Thunderbolt Ross also returns after his appearance in The Incredible Hulk, and since Norton’s departure and the love interest becoming vanished, it’s a bit of a surprise to see William Hurt back in the character’s shoes.

So far, out of the superhero movies that I’ve seen this year, Civil War ranks the highest (Deadpool will soon make an appearance on The Corvid Review). Of course, Doctor Strange is one on the list, and you can read what the Raven thought of it over here.

The team behind this movie are taking over the future Avengers movies in Whedon’s stead, and from what I can tell, they’re the right team for the job.

All I can say is, I’m happy for how Marvel continues to keep their engine running. I expect good things from them in the future.

Now can we please fix the Iron Man franchise?