a (shorter than usual) review by the Crow.

BOLDLY GOING WHERE I’VE GONE BEFORE

I first watched Iron Sky around the time of its release. Now, while a huge B-to-Z (Betazed…har-har) movie fanatic, I had almost no clue what this was at the time. Once the movie began, and those banners dropped, I knew exactly where I was. A friend snuck this one up on me, and I – in turn – snuck this upon the Raven, recently.

This movie, while certainly a comedy at heart, was almost trying to ape the “so bad it’s good” feel; which by all means is one of the most difficult things a movie can aspire to be. Intentions and crap filmmaking do not mix. Most of our favourite bad movies are the result of incompetence or misdirection. There’s no doubting that trying to fake these two things is folly.

But Iron Sky avoids that issue by not out-and-out trying to become “so bad it’s good”. Directed by Timo Vuorensola, and starring Julia Dietze, Götz Otto, and Udo Kier, among others, Iron Sky was released in 2012 to mixed reviews. The big question, of course, is what this crow thinks.

Iron Sky opens with the United States returning to the moon (something I dearly wish we were doing right now). The mission is both a PR stunt for the current President’s re-election campaign, and a venture to secure Helium-3 from the moon for the nation.

Things quickly go tits-up when the more “astronauty” of our landing party sees whole towers of the stuff, complete with lorries running between them, roads and all, and is promptly shot through the head by this guy:

The lander is MH-17’d, and our other astronaut is taken hostage by… moon nazis.

I swear I’m not making this up. And if you don’t recall partaking of any dubious substances, you probably aren’t on them right now RESULTS NOT GUARANTEED.

So, this astronaut turns out to be one of our heroes. He’s a black (African-American, that is) man who goes by Washington, James Washington, and comes outfitted with a darker space suit (well, if you’re going to have moon nazis, you might as well…).

He is returned to the Nazi base camp, where we’re introduced to Schutzstaffel Obergruppenführer Klaus Adler and the current Mondführer: Korfsleich. Washington nearly escapes, only to be stopped again by Adler after running into Renate Richter.

During his captivity, we’re introduced to the eccentric Dr Richter (an Einstein-looking mad scientist) who delivers one of the best jokes ever as we start out on our main plot. He points to the device below once Washington claims his phone is a computer and goes: “no, no… THIS is a computer!”

It turns out, of course, that this earthly “telephone-computer” is far advanced compared to the moon-Nazis’ tech. In light of this fact, Adler convinces the führer that he must return to the Earth to retrieve more of these “telephone-computers”, so that the Nazis can prepare their return home, spearheaded by the largest war machine ever created: the Götterdämmerung.

From the point we arrive on Earth, the movie loses a good bit of its polish. We lose all characters except for Renate, Adler, and Washington. Washington discovers that the Nazis have made him “Aryan”, and he eventually gets separated from them while kidnapping Vivian, an aide to the President of the USA.

The two Nazis launch the President’s re-election campaign in their own flavour, and boost her popularity. Eventually, as Renate and Washington reconnect on the streets some months down the line, and Adler starts making plans to call in the moon invasion (and overthrow the führer) while growing closer to Vivian. This middle section of the movie is quite frankly, boring. While things happen and laughs are had, the movie fails to really be that engaging.

As a matter of fact, while the overall premise is more than enough to set up a good film, the movie never really reaches any heights. It does far better than what you’d imagine from what is essentially a B-movie. There’s not really much to go over, even. It’s a fairly straightforward movie with a pretty decent undercurrent of political criticism. It does it’s job, but there isn’t much for it to do.

Iron Sky is quite polished. The battle sequences are adequately presented, and the performances are up to the mark. Some scenes could’ve been done better, and a few of the minor characters might’ve done better with better actors portraying them.

There’s not much special going on with the visuals, here. The movie has a quaint aesthetic to it, but there’s no more to see here. It looks more like a Battlestar Galactica (the remade series) episode than an out-and-out movie.

The audio, however, does make up for the movie in the production department. The score manages to even distract from some of the more boring bits of the movie, at times. A pretty solid job at the back, one could say.

Julia Dietze knocks it out of the park. She’s a great co-lead for the movie, and happens to be at the centre of most of the better humour in Iron Sky.

It’s a shame that the middle bit of the movie is such a let-down. This co-lead pales in comparison to his counterpart because of it. While the performance is pretty on-point.

Adler is a solid villain. Almost everything about the character is perfect. He hits more highs and lows than any other character in the movie.

I don’t know what it is about this character that annoys me so much. Her final act in the movie, I didn’t enjoy one bit. Her character was tolerable up until she steps foot on the USS George W. Bush. It’s downhill from there. 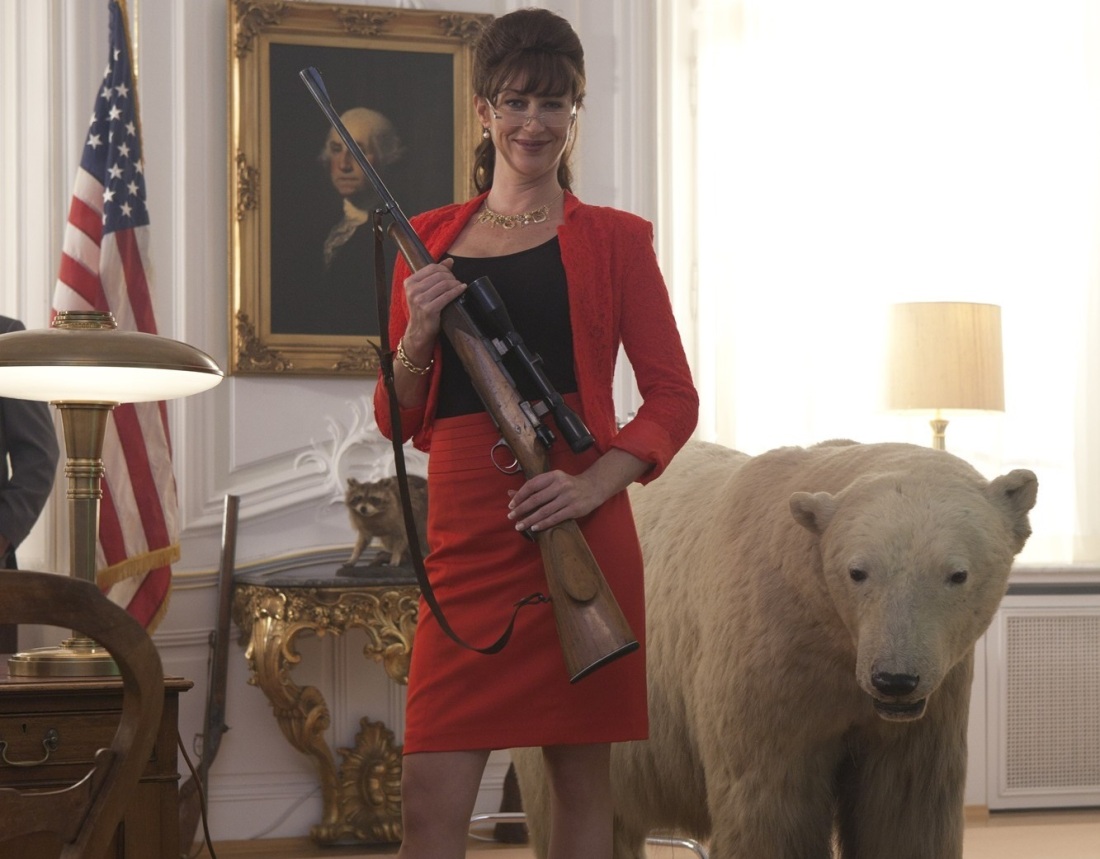 The President is a pretty spot-on parody of Sarah Palin. Good job with this one.

A pretty solid character overall. Not much to say about him.

Overall, Iron Sky isn’t that great. It does manage to be a fun movie at times, and while I personally love the charm it exudes, it never manages to be as memorable as other movies of its type. It’s good for a one-time watch, is all I’d recommend. Going by what’s been released so far, I’m not looking forward to the sequel. 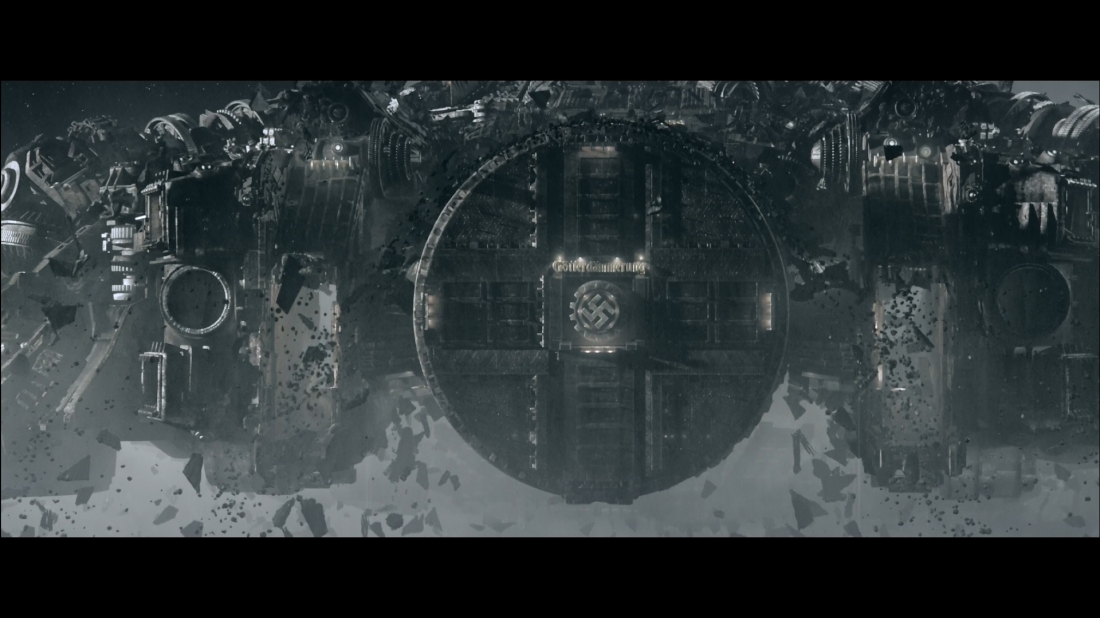